This Week Then: The History of Skiing in the Cascade Mountains 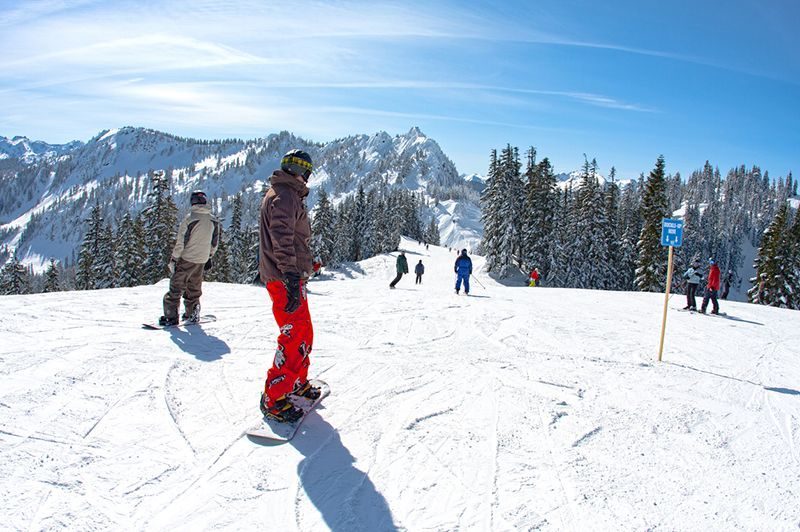 Out for a Ski

This week Historylink takes to the slopes with a look at the history of skiing in the Cascade Mountains. The sport first became popular here in the 1910s, mainly due to the efforts of The Mountaineers, who opened a ski lodge on Mount Rainier in 1913. More skiers arrived after Paradise Inn opened in 1917, and for years the mountain was the state’s premier spot to enjoy the snow. Even royalty skied there. In the 1930s, skiers sought to have an aerial tram built from Paradise Lodge to Camp Muir, but their efforts were met with resistance from the National Park Service. No lift was ever built, but soon skiers had found enjoyment elsewhere.

In 1921, the Cle Elum Ski Club formed the first organized ski area west of Denver and attracted hundreds of locals. The club flourished until the 1930s, when newer ski resorts began opening on the other side of the mountains, closer to Seattle. One popular spot was the Milwaukee Ski Bowl near Snoqualmie Pass, which was accessible by train. Another popular location was the Northern Pacific Stop at Stampede Pass. In Seattle, indoor ski tournaments were a big hit, especially for those who didn’t want to brave the winter weather, and the city also opened a municipal ski park near Snoqualmie Summit for those who did.

Future Olympians had tryouts on Northwest slopes, but World War II brought a halt to most recreational skiing in the mountains, although many ski clubs hosted military skiers, which helped keep the resorts in operation. After the war, the sport regained its popularity, especially among growing families who enjoyed newly expanded and upgraded ski areas. And there’s no question that skiing has been good for business. In 1937, Ski Lifts, Inc. began installing and operating the first rope tows in the Cascades, and companies like REI, Filson, Eddie Bauer, and K2 have catered to the many needs of snow lovers.

The Cascades continue to be a winter paradise for skiers who follow paths that have been enjoyed for generations. In 2014 the Mountaineers revived the Patrol Race, a grand tradition they had hosted from 1930-1941 in which skiers race over an 18.5 mile stretch along the crest of the Cascades. And in October 2015 the Washington State Ski and Snowboard Museum opened at Snoqualmie Summit. As long as there’s snow in the mountains, there will be plenty of people who enjoy schussing down it.

Home from the Sea

On January 10, 1914, fishing boats from cities all around Puget Sound gathered for the opening of Seattle’s Fisherman’s Terminal on Salmon Bay. The facility was one of the first projects for the Port of Seattle, which was formed less than three years earlier. When the port’s first three commissioners, headed by Hiram Chittenden, were tasked with determining which projects needed the most attention, a central home for the region’s scattered fishing fleet was at the top of their list.

Native Americans had fished Puget Sound waters for centuries, and soon after the arrival of white settlers in the 1850s, commercial fishermen followed their lead. Besides an abundance of salmon, the deep sound was also filled with plenty of halibut, cod, crab, and more. The fishery was especially enticing for European immigrants who had come from countries where fishing was a way of life.

Many Norwegian fishermen settled in Seattle’s Ballard neighborhood, as well as in Poulsbo and other waterfront cities. Anacortes and Bellingham both had robust Croatian fishing communities, where some families fished commercially for generations.

On January 14, 1861, the Washington Territorial Legislature created Snohomish County by carving it out of the then-larger Island County.This week also marks anniversaries for  the cities of Walla Walla, which was incorporated on January 11, 1862, and Colfax, whose residents voted to incorporate on January 14, 1879.

Class is in Session

On January 13, 1892, the opening of a solitary building on a treeless 25-acre campus near Pullman marked the first day of classes at the Washington Agricultural College. Since then the college has blossomed into Washington State University, one of the top public research universities in the United States. The university has undergone many changes, especially during the past half-century, while remaining faithful to its mission of expanding access to higher education for Washingtonians on both sides of the state.