This Week Then: Looking Back on Seattle’s Black Panther Party 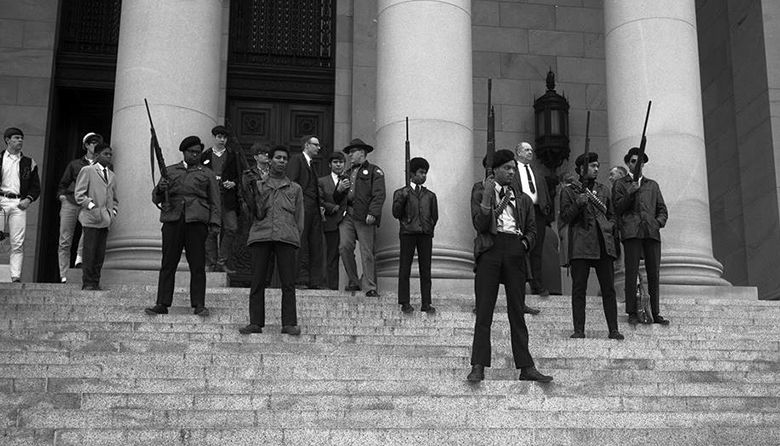 Fifty years ago this week, on February 28, 1969, eight members of the Seattle Black Panther Party gathered in Olympia and stood on the capitol steps holding rifles and shotguns to protest a gun-control bill that would make it a misdemeanor to exhibit firearms or other weapons in a manner manifesting intent to intimidate others. After removing the ammunition from their clips, the Black Panthers delivered a statement to the legislature and then left.

The Seattle chapter of the party had been established in April 1968, and Aaron Dixon was appointed as chapter captain by Black Panther Party cofounder Bobby Seale. In September that year, armed Panthers visited Rainier Beach High School and displayed their rifles and shotguns on the school grounds in defense of black students who had been attacked and threatened by white students. Relations between the city and the Panthers were already tense, and the city council quickly passed an emergency measure prohibiting the display of a “dangerous weapon” to intimidate others.

When the Panthers got wind of efforts to pass a similar gun-control law in Olympia, they pulled together a team to protest at the capitol. Legislative leaders, fearing an armed “invasion,” beefed up security and even had a machine gun installed on the capitol roof. But once the Panthers arrived and assured the police that their guns weren’t loaded, they walked inside. While Aaron Dixon delivered their message to the legislature, the Panthers held the doors shut, forcing legislators to listen to the five-minute speech. In all, the entire protest only lasted around 30 minutes. Governor Dan Evans signed the gun-control measure into law later that day.

When Columbia Center opened in Seattle on March 2, 1985, it became the tallest building in the Pacific Northwest, towering over the nearby Smith Tower, an earlier title-holder. The new skyscraper’s dominating presence on the Seattle skyline led to a 1989 ballot initiative to set growth limits downtown. New zoning laws have effectively repealed the cap on building heights, but so far no taller structure has been proposed.

Seattle’s first steel-framed skyscraper was the 14-story Alaska Building, completed in 1904. In 1910 work began on the Smith Tower, which opened in 1914. The pyramid-capped monolith was twice as tall as King Street Station, which since its opening in 1906 had been the city’s tallest building. For almost 50 years the Smith Tower was heralded by many as the “tallest building west of the Mississippi,” even though in 1931 a Kansas City skyscraper topped it by 19 feet.

Seattle’s skyline remained relatively unchanged until the opening of the Space Needle for the 1962 Seattle World’s Fair. Even though it was north of downtown, the space-age structure immediately became the recognizable symbol for Seattle, so much so that when the Seattle First National Bank Building claimed the crown as the city’s tallest structure in 1969, it was often referred to as “the box the Space Needle came in.” Since then, Seattle’s skyline has changed dramatically, and these days the South Lake Union neighborhood has become home for the newest wave of tall buildings.

On March 2, 1899, Congress approved the creation of Mount Rainier National Park, 378 square miles of land overshadowed by an active volcano more than 14,000 feet tall. Although considered sacred by some Native Americans, the mountain’s imposing height has proved attractive to climbers of all sorts, with some seeking to sound out or to make their voices heard.

On March 1, 1911, Governor Marion Hay signed a bill creating Pend Oreille County, in the state’s northeastern corner. Three months later he toured the region, not long before the county government was organized. Pend Oreille County was the last of Washington’s 39 counties to be formed.