The department was created just months after Seattle's Great Fire 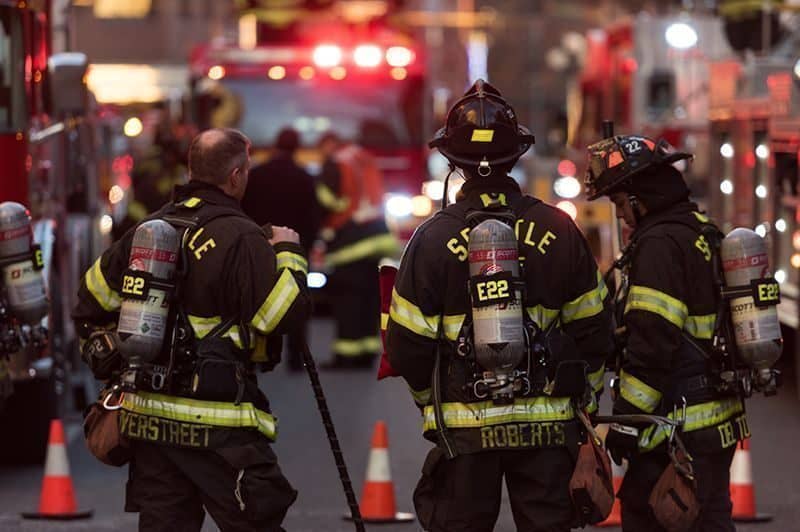 One hundred and thirty years ago this week, on October 17, 1889, the Seattle Fire Department was created, just a few months after the devastating fire that turned most of the city’s downtown into “a horrible black smudge.” Gardner Kellogg, a volunteer firefighter since 1870, was named the department’s first chief. During his first year on the job, the department built a new headquarters in downtown Seattle (shown above), as well as five new fire stations throughout the city.

Kellogg was an advocate of fire prevention, and he recommended ordinances that placed the responsibility for fire safety on building owners. Businessmen who balked at the increased costs asked for Kellogg’s removal, and the chief was fired in 1892. After a few years of political wrangling, Kellogg got his job back in 1896. He remained chief until 1901, when he became the city’s fire marshal, a position that allowed him a greater opportunity to focus on fire prevention.

Business owners in the growing city continued to voice complaints about the fire codes that helped keep their buildings safe, and in 1910 they found a sympathetic ear when Hiram Gill was elected mayor. Gill fired the sitting fire chief and replaced him with one of his card-playing buddies. A year later — after Gill was recalled for his “open-town” policy and the graft and corruption that came with it — the city began looking for a new fire chief. In 1911 the job was given to Frank Stetson, former chief of the Minneapolis Fire Department, who guided the Seattle department into less tumultuous times.

On October 17, 1889, two and a half months after a devastating fire destroyed downtown Spokane Falls, the first Monroe Street Bridge opened in the heart of the city. Located downstream from the Spokane River’s waterfalls, the crossing was built of wood tied together with iron rods. It didn’t last long, burning down in July 1890, and residents decided to build its replacement out of steel.

The second Monroe Street Bridge opened in 1892, by which time Spokane Falls had shortened its name to Spokane. Although this new bridge was sturdier than its rickety predecessor, it vibrated badly. The National Good Roads Association declared it unsafe in 1905, and even Ringling Brothers Circus elephants were said to have balked at crossing it. Plans were drawn up in 1909 for yet another replacement.

When it opened in 1911, the third Monroe Street Bridge proved to be a charm. The massive concrete structure with its graceful arches soon became one of Spokane’s most cherished landmarks. In 1976 the bridge was listed on the National Register of Historic Places, but by the 1990s the structure was deteriorating so badly that it was deemed beyond repair. Rather than build a new bridge of a different design, Spokane citizens opted to replace the old structure with an almost exact replica. The reconstructed Monroe Street Bridge opened in 2005, and is expected to last more than 75 years, cementing its reign as one of Spokane’s most beloved icons.

On October 18, 1899, Seattle unveiled in Pioneer Square its latest and proudest possession — a 60-foot totem pole. The ugly side of this story was that some of Seattle’s most prominent citizens, including James Clise, the acting president of the city’s Chamber of Commerce, had gone to Alaska and swiped the pole from Tlingit Indians. Charges were filed, but little came of them. The totem pole lasted until it was humbled by an arsonist on October 22, 1938. Its burnt remains — along with a check from the federal government — were returned to the Tlingits, who magnanimously agreed to carve a replica, which still stands in Pioneer Square.

On October 19, 1906, residents of Tacoma’s Smelter District voted to incorporate the city of Ruston, named in honor of the Tacoma Smelting and Refining Company’s general manager, William Rust. For years, Ruston was home to what was once the world’s largest smokestack, which was reduced to rubble by a controlled demolition in 1993.

On October 18, 1924, the USS Shenandoah, the first rigid, lighter-than-air craft to complete a transcontinental flight, arrived at Camp Lewis in Pierce County after flying north from San Diego. Five years later, on October 17, 1929, a giant Tupolev ANT-4 twin-engine airplane landed at Sand Point in Seattle after flying from Moscow in the Soviet Union.