This Week Then: Seattle Turns 150 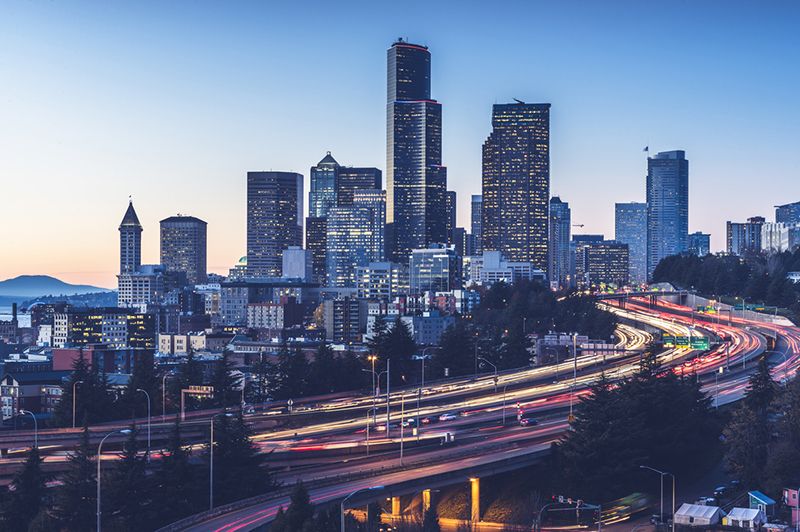 A City on the Go

Happy birthday, Seattle! One hundred and fifty years ago this week, on December 2, 1869, the city was officially incorporated by the Washington Territorial Legislature — but getting there was no easy task. Eighteen years earlier, the Denny Party arrived near Alki Point on Elliott Bay, and the group might not have survived that first winter without the aid of the Duwamish and Suquamish tribes led by Chief Seattle. In the spring, members of the party relocated to the eastern shore of the bay, intent upon founding a city.

The new village was called Duwamps until late 1852, when newcomer Doc Maynard convinced his neighbors to adopt the name of Chief Seattle. Soon after the first plats were filed in 1853 (which created a tangle of mismatched streets that still exists near Pioneer Square), the tiny community began to grow. In 1865 the town of Seattle incorporated for the first time and was governed by a five-man board of trustees. Two years later, the citizens had second thoughts and filed a petition for dissolution. In 1869, they asked the legislature to reincorporate the city — this time with a mayor and town council — and the rest is, as we say, history.

In celebration of Seattle’s first 150 years, HistoryLink — with the participation of the Office of the City Clerk and Seattle Municipal Archives — has launched a new book, Seattle at 150: Stories of the City through 150 Objects from the Seattle Municipal Archives. Written by Jennifer Ott, with contributions by John Caldbick, Casey McNerthney, Fred Poyner, Shannon Sawyer, and David Williams, the book is now available online and in local book stores. And be sure to join us at the Seattle Public Library on December 4 for a panel discussion about Seattle at 150 with HistoryLink historians and city archivists.

This week also marks the anniversary of another notable event in Seattle history — one in which HistoryLink played an unexpected role. Twenty years ago this week, the city hosted the World Trade Organization’s Third Ministerial Conference, which brought 135 trade delegates to the city. It also drew tens of thousands of activists who condemned the WTO for favoring corporate interests over social and environmental concerns. City officials had assured downtown business owners that the police were well-prepared for any conflicts that might arise. On November 28, several marches and a few small rallies were held downtown, and on November 29 more people gathered together in mostly non-confrontational protests. Then, on November 30, the crowds swelled and all hell broke loose.

Unprepared for the huge numbers of protesters, Seattle police used tear gas and pepper spray to clear some intersections. Undaunted, the crowd of protesters continued to grow, and handfuls of “self-proclaimed anarchists” broke windows and sprayed graffiti. By mid-afternoon, Seattle Mayor Paul Schell declared a state of emergency and police began using massive amounts of tear gas, pepper spray, rubber bullets, and other “less lethal munitions” to move protesters, and anyone else — including news reporters and film crews — out of downtown. Newsfeeds from the heart of the protest disappeared. Meanwhile, high above Westlake Center, HistoryLink’s “WTO-Cam” silently grabbed single snapshots of the chaos once every 30 seconds and sent them out over the web.

The following day, police enforced a “No Protest Zone” around the WTO meeting, but major confrontations occurred as demonstrators were pushed up Capitol Hill. The crackdown eased on December 2 as peaceful protests proceeded. The WTO conference ended in failure on December 3 due to disagreements among the delegates and the protests on the streets.

Attack on a Mission

On November 29, 1847, a group of Cayuse killed 14 white settlers and missionaries in what became known as the Whitman Massacre. The public outrage over the attack led to a war of retaliation against the Cayuse that spurred the creation of Oregon Territory.

On November 30, 1917, anti-war activist Louise Olivereau was convicted of sedition for mailing circulars that encouraged young men to become conscientious objectors to avoid military service in World War I. Sentenced to 10 years in prison, she only served 28 months in the state penitentiary in Cañon City, Colorado, before being paroled.