What to Expect When You’re Expecting a Seattle Streetcar Line

The streetcar still faces a number of hurdles, including the need for funding at the city and state levels 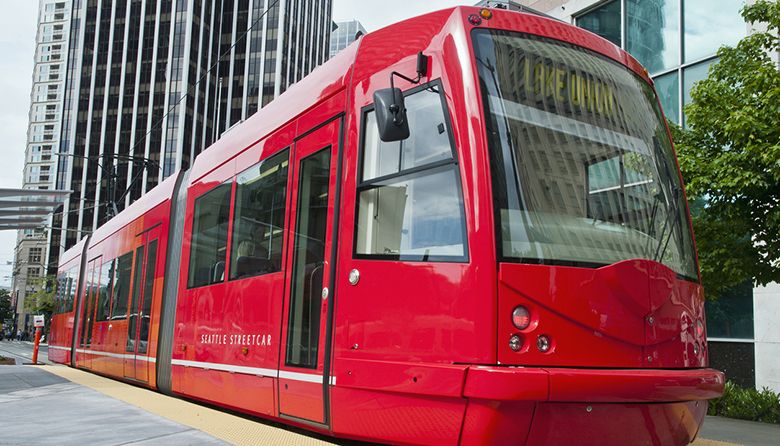 Last week, defying early expectations that she would abandon the planned downtown Seattle streetcar after pausing construction nearly a year ago, Mayor Jenny Durkan announced that she would ask the city council to proceed with the project. The caveat? The council will need to come up with additional $65 million to help the Seattle Department of Transportation pay for the project, whose price tag has swelled to an estimated $285.8 million from an original estimate of $134.9 million. (The city’s utility departments will have to come up with another $23 million for utility work that the city says is long overdue with or without the streetcar project.)

The latest budget increase is the result of delays to the project timeline (besides the 10-month pause in the project, the city now estimates that it will take 18 months for the Federal Transit Administration to review the project for funding—see below for more details—pushing the opening date from 2022 to 2025); extra costs that Durkan says SDOT failed to account for under her predecessor, Ed Murray, including a new maintenance facility and bridge reinforcements; and the need for large ongoing operations subsidy, which could swell to $19 million a year by the second full year the center city streetcar is in operation.

“It is clear now that the previous SDOT management in the last administration had failed to do the proper due diligence to account for all the costs,” Durkan said in a statement. “As a result, this project was not set up for future long-term financial success[.]”

So what does last week’s announcement mean, and what happens now? We’ve put together some questions and answers to explain where the streetcar goes from here.

Does last week’s announcement mean the streetcar will actually be built?

The streetcar still faces a number of hurdles, including the need for funding at the city and state levels. In December, the Federal Transit Administration told the city that the project remained in the running for a $75 million federal Small Starts grant, but the federal funding is not yet secure; without it, the total SDOT funding gap will be $140 million.

Even assuming a smaller shortfall, the city will have to come up with at least $65 million in additional funding, possibly by issuing bonds against an existing revenue source such the commercial parking tax, or as part of a future transportation levy. The city council will now have to work with the mayor’s office, and incoming SDOT director Sam Zimbabwe, to find a source for the additional funding.

Why was there a delay in the first place?

Durkan halted the streetcar project last March after a preliminary review of the project found that costs had ballooned to more than $200 million. The nine-month pause allowed outside evaluators to analyze the cost to build and operate the system as well as SDOT’s engineering work on the project, which a spokeswoman from Durkan’s office says did not include the cost of reinforcing several bridges in Pioneer Square that will need to be strengthened to carry the heavier new trains—which are already on order and weigh about 12 tons more than the existing streetcars.

Why is a streetcar on First Avenue even necessary? Who will it serve?

Business and community groups that support the streetcar, organized as the Seattle Streetcar Coalition, say the First Avenue trolley will do several things: connect downtown businesses and provide a convenient one-seat ride between downtown destinations; serve thousands of low-income downtown residents; and be a speedier option than buses because it will run in its own dedicated lane on First Avenue. Skeptics, meanwhile, counter that Seattle already has a grade-separated light rail train, which runs in the Downtown Transit Tunnel just two blocks east. And, of course, there’s also plain old nostalgia—for more than two decades, the historic George Benson Trolley ran along the downtown waterfront, until its maintenance barn was demolished to make room for the Olympic Sculpture Park. The existing streetcars seem like they’re always empty. Will anyone ride it?

The mayor’s office acknowledges that ridership on the South Lake Union streetcar, which was built partly with private contributions from major SLU landowner Vulcan Real Estate, has declined in recent years. But, they are quick to add, ridership on the First Hill portion of the streetcar—which was built as a kind of consolation prize after Sound Transit killed a planned First Hill light rail stop—has been going up dramatically.

According to the city, once the full line is open, ridership—which on the two existing lines was about 1.4 million a year in 2017—will rise to 7.4 million in 2027, the Center City Connector’s second full year of operations. The mayor’s office also says that the city has studied alternatives to the streetcar—such as reviving a bus route on First Avenue, which was a replacement for the original waterfront trolleys—but says they don’t perform as well in ridership projections as the streetcar.

In nine months, Durkan went from being a streetcar skeptic to the kind of mayor who says things like, “As we reconnect downtown with our new Waterfront for All, we have the opportunity to create a downtown with fewer cars and where residents, workers, and visitors can walk, bike, and take transit.” In her statement last week, Durkan continued, “A unified streetcar route provides a unique opportunity to build on our investments for the next generation.”

Perhaps the latest round of overruns was smaller than Durkan expected. But she is also responding to the political reality (reportedly communicated to her by her political advisors) that the streetcar enjoys strong support from many constituents, not just the lefty urbanists and transit advocates who voted for her opponent Cary Moon in 2017, but business leaders, developers, and others she needs to have on board if she wants to get reelected in 2021.

The Seattle Streetcar Coalition, which includes the Washington State Convention Center, Transportation Choices Coalition, Uwajimaya, the Seattle Art Museum, and the Downtown Seattle Association, said in a statement immediately following Durkan’s announcement that they were “thrilled” that the streetcar has been revived. In a press release, the coalition “commend[ed] Mayor Jenny Durkan for her leadership on transportation and her commitment to delivering the critical next piece of Seattle’s streetcar system.”