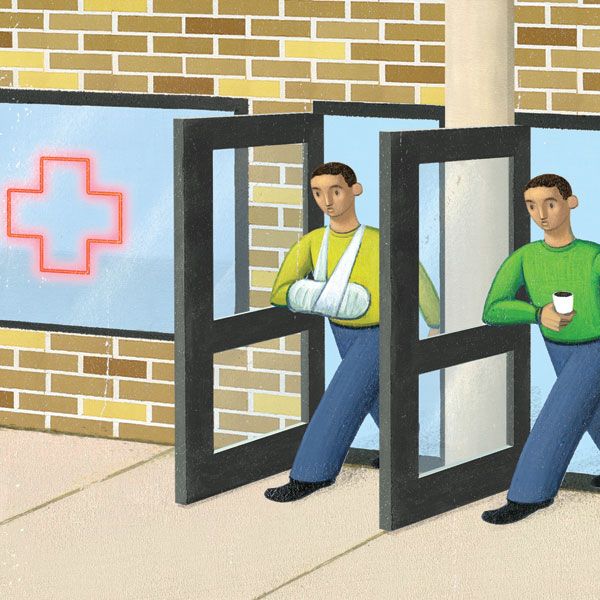 Emergency medical care in Washington is getting a radical makeover: Freestanding, “no wait” emergency centers are cropping up in fast-growing suburbs, providing closer-to-home options to those often dreaded, crowded ER waiting rooms in urban hospitals.

These ERs, often in or near trendy shopping centers, tout quick, high-quality treatment for sudden injuries and illnesses. “It’s a growing trend,” says Caroline Rossi Steinberg, vice president for trends analysis at the American Hospital Association. “It’s an efficient way for hospitals to meet growing emergency care needs of the communities.” She says the number of freestanding emergency rooms nationwide has increased in the last five years by about 65 percent.

Locally, Swedish Medical Center developed the region’s first freestanding emergency department in Issaquah in March 2005. It opened a second in Redmond last December, and a third in February in Mill Creek. In March, Evergreen Hospital Medical Center opened its own stand-alone emergency center in a Redmond shopping center.

“We want to radically change the way people think about emergency care,” says Lisa Knutson, operations manager of Swedish Medical Center’s Redmond freestanding ER. The focus: treating people where they live and work, and getting them through the system—and to a doctor—quickly. On average, patients are treated, diagnosed and ready to be discharged within about 90 minutes, as opposed to the state’s average hospital ER wait of four hours. Costs are comparable to those of traditional ERs—at least for the patient.

Two more freestanding emergency centers are being planned by Valley Medical Center and MultiCare for the Covington area, but those projects could be affected by pending legislation sponsored by state Senator Cheryl Pflug, R-Maple Valley, a registered nurse who is calling for more stringent building requirements and a two-year moratorium on new construction of ER centers. Pflug, who is also earning a law degree, says taxpayers are getting soaked by these types of facilities, which she says are being built as “profit centers” under the guise of convenience. “They are driving quality down and driving costs through the ceiling” by focusing on efficiency, she says, adding that the centers also are creating health care monopolies. “It’s all about market domination.” Instead, Pflug advocates expanding and improving primary care systems. But Dr. John Milne, a vice president of medical affairs for Swedish, says that the increasing density in cities such as Redmond and Issaquah is creating increased demand for this type of care: “We are responding to the demographic changes in the population.”

How are these new ERs different from other types of emergency care, and when should you consider using them? Here’s a quick primer on the new emergency centers.

What are they? Neighborhood emergency centers where patients are evaluated, stabilized and treated for acute illnesses or injuries, including those suffering from stroke, severe lacerations, burns, broken bones, allergic reactions and food poisoning. They operate around the clock and are staffed by board-certified ER doctors, nurses and medical technicians.

How do they work? Upon entering, you are directed to a “greeter” desk, where a nurse assesses you, then directs you to an exam room, where an “intake team” (a nurse, an ER technician and physician) takes over. “It’s kind of a NASCAR pit crew phenomenon where everybody is on deck,” Milne says.

How do they differ from “urgent care centers”? Many urgent care centers offer basically the same services a primary care physician would, except on a walk-in basis. Many are not open 24/7. Freestanding emergency departments, however, provide the same diagnostics and initial care as their affiliated hospital’s ER, around the clock. Patients with serious injuries or illnesses—or who require extended treatment or surgery—are transferred by ambulance to the hospital “The only difference is the ‘elevator ride’ from the ER to the hospital bed is a little longer,” says Milne.

Why now? Emergency care in the U.S. is at the breaking point, according to a 2006 report by the Institute of Medicine, an arm of the nonprofit National Academy of Sciences. It noted that about 703 hospitals have closed in the last several years because of cost-cutting measures, while demand for emergency and trauma care has increased dramatically. Use of emergency rooms nationwide has increased 26 percent since 1997, to about 114 million patients, according to the Centers for Disease Control and Prevention (CDC), possibly due to an increase in the number of uninsured. But only about 13 percent of emergency room visits result in hospital admissions, the report says. “There is a huge gap between what can be done in a traditional outpatient clinic and an acute care hospital,” Milne says. “We’re really just part of the rapid evolution of health care.”