When Will Seattle Streets Be Safe Enough for Cyclists? 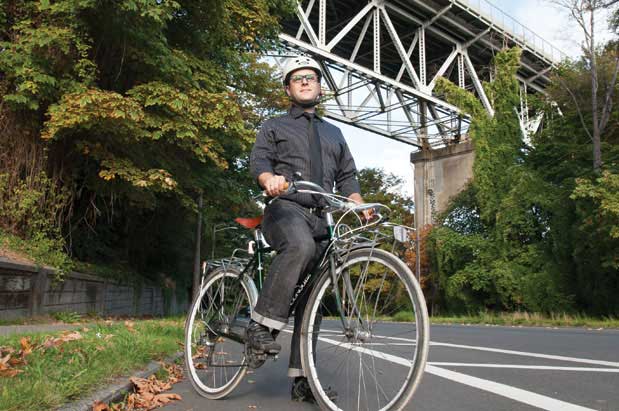 This article originally appeared in the December 2012 issue of Seattle Magazine.

You’ve heard it all a million times: Drivers are jerky, lazy, inattentive louts looking to put another notch in their steering wheels by giving cyclists a close shave, thereby asserting the supremacy of the almighty car while wasting our precious natural resources. And cyclists are entitled, arrogant, Lycra-clad maniacs with a death wish, impeding traffic and making drivers feel out of shape and unecological. Discussions between the two groups often sound like schoolyard altercations, with each side blaming the other for the city’s traffic woes, and no one willing to share the road.

This year, Seattle Department of Transportation (SDOT) spearheaded an update to an earlier plan in an effort to reconcile the two sides. The results are being compiled as a draft plan due in January and then slated, after a public comment period, to go to the City Council for a vote in or around March.

If you’re thinking, “Didn’t this already happen?” you’d be partly right. Only five years ago, the city adopted the ambitious Bicycle Master Plan (known as BMP, which mandated the update). One of BMP’s goals was to triple the amount of bicycling by 2017, while reducing collisions by one-third. The original plan put forth the vision of a 450-mile network of on- and off-street bicycle facilities, including neighborhood greenways (non-arterial streets that receive “calming treatments,” such as speed cushions and intersection safety signals), buffered bike lanes (where there is a designated lane on the pavement between the bike lane and the traffic lane), painted lanes and more. Funding to implement this plan came from the $365 million “Bridging the Gap” transportation improvement initiative (passed in 2006 and up for renewal in 2015).

The 2007 plan was skewed towards the ‘fearless commuter,’ But that has definitely changed.

So if we already have a Bicycle Master Plan, why do we need to spend more money to update it? Allegra Calder, cochair of the Seattle Bicycle Advisory Board, a volunteer organization appointed by the mayor and City Council to advise the city on bike-related matters, points to a change in thinking about bike facilities. “In the 2007 plan,” she says, “there was a lot of talk about bike lanes on the roads. Since then, sharrows [shared lanes] have not been a preferred bike facility. If you look around the country, you see other cities introducing bike lanes with buffers and cycle tracks. The 2007 plan did not mention the range of options.”

Proponents of the update say that for the first time, there are good, widely accepted engineering standards for bike facilities in urban settings, according to Bill LaBorde, legislative assistant to council member Tom Rasmussen, chair of the council’s transportation committee. “In 2011, the National Association of City Transportation Officials introduced a book of standards for bicycle facilities covering everything from the proper design of bike lanes to instructions on how to use sharrows to intersection design,” LaBorde says. “The BMP update and SDOT have integrated this thinking in its recommendations for intersection treatments.”

He points to the success of the Dexter corridor improvements, where the movement of bicycles and buses is separated by a barrier, as the kind of thinking we’ll need in order to make Seattle competitive as a number-one bicycling city in the next five years and beyond.

Better engineering is only part of the story; enticing more cyclists to take to the roads is another key. To that end, the City Council is using some of the $250,000 allocated for the update to draw input from beyond the usual bike types, by distributing information to all 37 community centers, all public libraries and by using social media. In addition, the city conducted a random phone survey in all Seattle ZIP codes, as well as an online survey that appeared in seven languages and generated more than 3,500 responses. The surveys found that people ride bikes for all sorts of reasons: recreation, transportation, health benefits and commuting to and from work among them. Reasons that people do not ride range from not wanting to deal with the weather to having too much to carry, to concern about poor pavement, to worries over safety conditions.

Weather wimps or those with too much to carry won’t find much in the BMP update to alleviate their suffering. But poor pavement and safety conditions are being taken up with gusto. According to LaBorde, so far the updates include plans for an additional 129 miles of on-street bicycle facilities, such as bike lanes and sharrows; nine miles of multi-use trail improvements, including segments of the Chief Sealth, the South Ship Canal, Mountains to Sound Greenway and the Burke-Gilman trails; 98 miles of bicycle way-finding signage; and 2,230 new bicycle parking spaces.

But the work is far from over, especially for certain folks with bikes gathering dust in the garage. “The existing network might work for the 3.5 percent of people in Seattle that currently commute by bike, but it is now clear that it doesn’t work for the ‘willing but wary’ people who want to ride but don’t feel safe,” says Max Hepp-Buchanan, Cascade Bicycle Club’s advocacy campaigns manager. “There’s a huge potential for growing the number of people on bikes by building for people [who] are unwilling to ride on arterials with sharrows or standard bike lanes. The growth of the Seattle Neighborhood Greenways movement has hopefully made it clear to Seattle decision-makers that there is a strong demand for bikeways that are safe and comfortable for people of all ages and abilities. If their children or grandparents would not be safe and comfortable riding on a particular bikeway, then we’re not building it right.”

Hepp-Buchanan and other bike advocates want to see an interconnected network of bike facilities that will help convert the majority of Seattle citizens who are interested in cycling but don’t feel they can hop on a bike and ride from one place to another safely.

“More neighborhoods were coming to SDOT and council asking for greenways,” LaBorde says. “The update calls for considering issues such as where the need for greenways is greatest, how we can fill in missing links in the bicycle network, how we can address safety issues and how to bring greenways to parts of the city that were left behind.” The update also urges the BMP to take a more equitable view, so that new greenways—and bicycle facilities in general—are not installed just in neighborhoods that have been the most organized and made the most requests.

“The update is an update of the vision that emphasizes making biking accessible to all ages and abilities,” Calder says. “The 2007 plan was skewed towards the ‘fearless commuter,’ but that has definitely changed.” Now more people are riding, possibly due to the high cost of gas, possibly for health reasons. Biking has become fashionable, Calder says, “just open a magazine, and you’ll see how cool it is to bike. And when you go to a Sounders game, all the bike racks are full.”

She also cites a movement among parents to encourage their children to ride bikes together to school. Perhaps the true sign of success for this latest round of updates will be when pelotons of elementary school students sweep across all corners of our city headed to and from school each morning and afternoon.