Why Alaska’s Pebble Mine Matters in Seattle 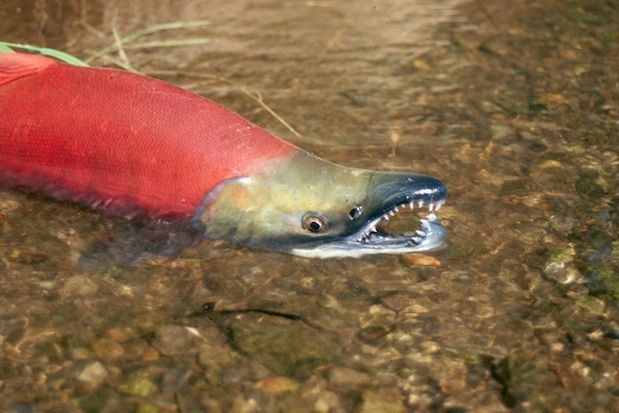 Salmon spawn in our rivers, climb our fish ladders, adorn everything from totem poles to T-shirts and grace our plates. They are synonymous with Seattle. And we spend a great deal of time and effort trying to protect their habitat close to home.

These days, most of our wild salmon come from Alaska, in particular, from the tundra-like headwaters of Bristol Bay, the world’s greatest salmon nursery, where storied rivers such as the Kvichak and Nushagak spawn 40 percent of the global sockeye population. Each spring, tens of millions of adult salmon pile into Bristol Bay before migrating up their natal rivers, supporting a commercial fishery that employs nearly 14,000 people—including many fishermen and seasonal workers from the Puget Sound region—and directly generates approximately $500 million annually.

But beneath these pristine spawning grounds sit huge reserves of copper, molybdenum and gold. And, a multinational mining partnership—London-based multinational Anglo American PLC and Vancouver, B.C.–based Canadian Northern Dynasty Minerals Ltd.—wants to dig North America’s largest open-pit mine here to get at these metals, which have an estimated worth of up to $500 billion. Preliminary plans call for processing 10 billion tons of ore and storing billions of tons of waste behind tailings barriers far larger than Grand Coulee Dam. With an industrial footprint twice the size of Seattle, the Pebble Mine would operate in a seismically active region that can boast the 20th century’s biggest volcanic eruption—nearby Novarupta, in 1912, with a blast 10 times that of Mount St. Helens.

This is why some local tribes, whose members have subsistence-fished the Bristol Bay rivers for thousands of years, petitioned the U.S. Environmental Protection Agency (EPA) to assess the Pebble project. A draft of that EPA report suggested that should the mine proceed, environmental degradation is likely, even imminent. The first and only public hearing outside of Alaska was held in Seattle last May. Eighty percent of the public comments at that meeting, from Seattle fishermen to Alaskan tribal members, supported the EPA process.

Tom Douglas calls Pebble mine “one of the most critical environmental debates of our time.

The EPA is slated to release a final report any day now. Proponents worry, and opponents hope, that the agency will use its power to kill the project outright, thanks to a rarely used clause in the Clean Water Act that authorizes the federal agency to prohibit the discharge of dredged or fill material that negatively impacts fisheries, wildlife, municipal water supplies or recreational areas.

It’s a predicament for the new millennium. Copper, in particular, is an important ingredient in all sorts of modern conveniences, from smartphones to microwave ovens. (Northern Dynasty estimates Pebble could produce one-quarter of America’s domestic copper supply for more than 50 years.) On the other side of the ledger, salmon are the main ingredient in the diets of local Native Americans, who represent a majority of the immediate area’s population.

“Bristol Bay is one of the last really big, fully functioning salmon ecosystems on the planet,” says Thomas Quinn, a professor at University of Washington’s School of Aquatic and Fishery Sciences. He’s been researching salmon in Bristol Bay for the past 25 years and believes the mine, “on balance, would be bad for Alaska, bad for the U.S. and even bad for the world.” Because of the region’s porous soils, an accidental spill of toxic mining contaminants would spread quickly from drainage to drainage, imperiling the salmon and everything else that depends on them, from grizzly bears and eagles to salmon-based native cultures.

The carefully regulated fishery allows enough salmon to reach the spawning grounds each year so that the runs replenish themselves, leaving, on average, 26 million sockeye for the commercial fishery. In a world of diminishing natural resources, a well-managed wild salmon run such as this is a de facto poster child for that trendy yet elusive ideal, sustainability.

By now it’s a familiar story: multinationals getting rich off the public domain and leaving taxpayers with a ruined environment and a massive cleanup bill. The Pebble backers say this won’t happen again, but history suggests otherwise. A quick look at Anglo American reveals a checkered track record. Corporate watchdog Philip Mattera points to a long list of accidental spills, contaminations, deaths and unintended consequences caused by Anglo American–associated mining interests, including an operation in Nevada that was the single largest producer of mercury air pollution in the U.S.

Seattle restaurateur Tom Douglas calls it “one of the most critical environmental debates of our time.” Last October, he held a press conference at his waterfront restaurant Seatown to voice his objections and ask fellow Seattleites to get involved. “Wild salmon are at the core of our identity and culture here in the Pacific Northwest,” he wrote in an open letter to his customers. “They have shaped our communities and the economy.”

Douglas is hardly alone among Seattle chefs. Kevin Davis, chef/owner of Steelhead Diner and Blueacre Seafood, has been decrying Pebble for years, finally meeting with Senator Maria Cantwell in Washington, D.C., not long before she became the first U.S. senator to oppose the mine in September 2011. An avid Northwest angler, Davis has fished the waters around Bristol Bay, too. “It’s a magical place, it really is,” he says. “The idea of opening that area to open-pit mining is just egregious. There’s only a little water left on earth that hasn’t been ruined.”

These chefs have surprising allies—in local jewelers E.E. Robbins, Ben Bridge and Blue Nile. They oppose Pebble, even though they’re in the business of selling gold. “I happen to enjoy the outdoors and I love to fish,” says Emerson Robbins, a third-generation jeweler and E.E. Robbins founder. “Thank God we live in a place that cares about the planet and we put our environment before our pocketbook.”

Of course, the biggest impact on Seattle livelihoods in the event of an accident would be felt by commercial fishermen. There are approximately 800 Bristol Bay fishing permits owned by Washington state residents, with around 100 fishermen in the Seattle area, not including all the support personnel who go north each fishing season. In a good year, a single boat might net as much as 100,000 pounds of salmon in the two-month window, earning a little more than a dollar per pound before expenses. The fish are off-loaded to vessels that bring the catch to the processor, where they’re cleaned and readied for shipment. While most of the 32-foot fishing boats stay in Alaska, many of the larger tenders spend the winter moored at Fishermen’s Terminal in Ballard.

Seattle resident Ben Blakey, 30, grew up fishing and working in Bristol Bay with his family, and now fishes for sockeye every year on his own boat. Like virtually all fishermen, Blakey is opposed to the mine. Compared to profiting from salmon runs that have been returning on schedule more or less for millennia, he says, the mine is a short-term project and not worth it. But his argument goes beyond the merely economic. “One of the great things about the area is how pristine it is,” Blakey says. “The heavy hand of industrialization hasn’t left its mark yet, and that’s probably why the runs are still so good.”

With the reelection of President Obama bolstering their hopes, mine opponents wait to see if the EPA will kill Pebble. Meanwhile, next time you’re grilling a shiny wild salmon, it’s worth remembering that all that glitters is not gold.