Why Can’t Seattle be More Welcoming to Tourists?

A little effort (on both sides) would go a long way. 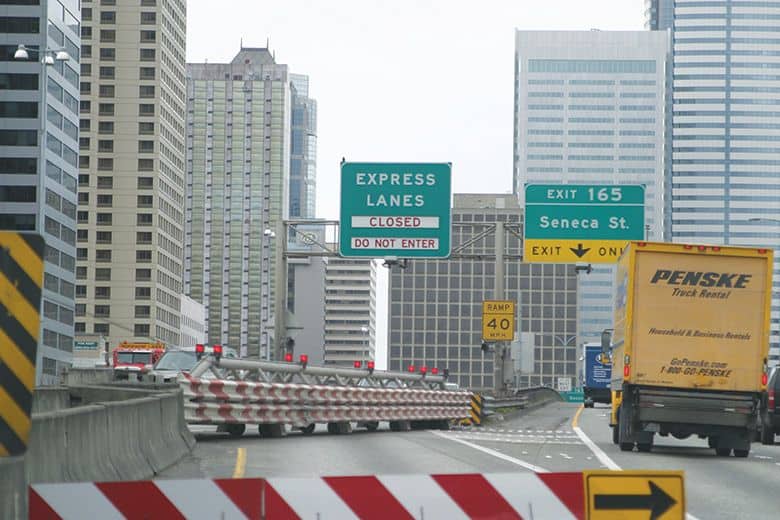 Seattle is a great city in the summer. The scenery is at its finest, and downtown is abuzz with visitors from around the world. Much of our downtown redevelopment, especially in the Pike-Pine corridor and retail core, has been designed for tourists and other visitors.

The Washington State Convention Center is expanding yet again, doubling in size with a planned $1.6 billion expansion to accommodate conventioneers. Tourism is key to keeping the region vital. Seattle and King County hosted more than 38 million visitors in 2015; the combined economic impact of those tourists was estimated by Visit Seattle to be nearly $10 billion.
Still, we’re of two minds about tourism.

We’re redoing the waterfront, but work down there has been very disruptive to tourism-dependent businesses. And even once the Alaskan Way Viaduct is down, folks will have to cross as many as eight new, heavily trafficked lanes to get there. Maybe it’ll be better than it sounds.

We’re a city of prosperity that likes to think of itself as a progressive role model, yet tourists are greeted by the homeless and panhandlers. Brand-new high-rises are juxtaposed against jungle encampments filling the city’s interstices. How can a city of such wealth produce so much poverty? Visitors might be left to wonder why the “Emerald City” is so visibly tarnished.

We welcome tourists, but are happy to let them get lost. Our signage sucks. Interstate 5 through downtown is hard to navigate, with lanes merging and splitting confusingly. Headed for the airport, you might find yourself herded by traffic onto Interstate 90, detoured to Mercer Island. Good luck getting back on track.

Sometimes signs point in the wrong direction—I saw one downtown near the library that directed people aiming for Seattle Center to the waterfront! Navigation problems aren’t always the result of confusing geography, but of our indifference to helping direct visitors to and from destinations. A visitor will be hard-pressed to find a local to ask for directions—or one who can actually help them. Many are only newly arrived themselves. Smartphones are essential to helping out-of-towners navigate the city, but they won’t necessarily warn you of the latest and abundant detours, alternate routes and construction hazards along the way.

The Seattle Times’ FYI Guy, Gene Balk, reported on a recent J.D. Power study that ranked Seattle very low—37th out of 50 U.S. cities—in visitor satisfaction. J.D. Power made its name ranking automobiles. We’re not in the Mercedes category, more like a mid-range Chrysler. Indianapolis, Indiana, and Columbus, Ohio, ranked higher. We are “less than stellar,” concluded the Times.

About 600 Seattle business and pleasure travelers were surveyed in the study. What were the problems they had with us? We’re too expensive, especially our hotels. Balk reported that, according to Hotels.com, we’re the ninth-most-expensive city in which to book a room. Folks also complained about getting lost, the congestion and a lack of public facilities (where to pee?). They missed a couple of things that might give some visitors pause: the Ride the Ducks city tours, with their well-publicized safety issues, or the fact that one of our most touted attractions is a tour of Pioneer Square basements (i.e., the Underground Tour).

Our relationship with visitors seems odd given how much Seattle wants to be adored by the rest of the world. Culturally, we bask in the approval of others. We also rely on our natural wonders. I think this leads to complacency, a sense that people will come, no matter what; that we don’t need to do anything to cultivate tourism. We simply get to milk it.

Balk pointed out that the one area J.D. Powers noted visitors were pleased with was the food. Our restaurants got good reviews. But there are good-eating cities that rank much higher, like New Orleans.

Complacency has been an issue at the state level, too. While our nearby neighbors have robust state tourism offices—California, Montana and Oregon have all run aggressive campaigns to attract visitors—Washington state eliminated its department of tourism in 2011 and has left it to a private-sector nonprofit, the Washington Tourism Alliance, to promote tourism (although some in Olympia would like to revive a state-funded tourist program). Seattle has its own private nonprofit, Visit Seattle, that promotes the city.

As far as Seattle goes, it also might be that tourists are not getting out to see the right sights. The Market and the Needle are givens, but the real Seattle isn’t just downtown.