Living in the backyard. Climbing through windows. Here’s how one family made it work. 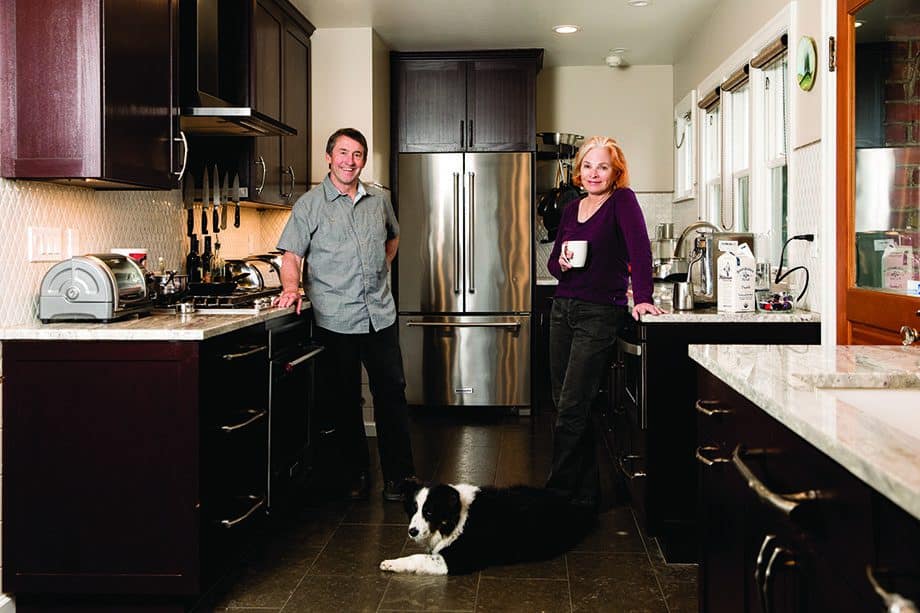 The idea to remodel their 1929 kitchen floated on the fringes of the imaginations of Nick O’Connell and Lisa Sowder for years, thoughts that bobbed to the surface only to be tossed aside by the sheer impracticality of it all.

How could they, two busy professionals with three children and a dog, undertake a full-scale kitchen renovation? The disruption would be hell. That kitchen, outdated as it was, operated as the nerve center of their lives. Sure, the counters were tiny and the cabinets were falling apart and traffic flow was a nightmare and someone was always bumping into someone else. But the family cooked and ate and gathered there every day. Living with construction for months on end seemed unthinkable. Renting another home during the project, on top of the tens of thousands of dollars they’d pour into a remodel, wasn’t feasible either. Maybe the project was something to explore once the kids left the house.

Still, that old longing burned. As their children grew up and the house echoed with teenagers coming and going, the kitchen remained a stubborn point of dysfunction. So, 15 years after first talking about it, O’Connell and Sowder decided they were ready. They had saved enough money to hire a designer and a contractor. One son had moved to California, and their other son and daughter, who lived at home, were 20 and 17, respectively — old enough to handle a little chaos for a few months. O’Connell, always up for an adventure, couldn’t wait.

In the early hours of a June morning, they welcomed a construction crew into their Queen Anne home, happy, excited and unaware of what was to come.

Home remodeling seems to be on everyone’s minds these days. While Covid accelerated a massive shift in how we live and work, more and more people took that leap of faith and tackled projects they had long neglected in order to improve the quality of life inside their homes. A recent Harvard University study predicts spending on home remodeling and maintenance will reach $430 billion by the second half of this year. The trend is expected to climb due to the ongoing strength of home sales, growing household incomes and home price appreciation.

The city of Seattle does not collect data on renovation trends. Permits aren’t required for many interior remodels, especially if no structural walls are removed. But demand for home projects remains high, says Bryan Stevens, a spokesperson for the city’s Department of Construction and Inspections.

“We know contractors are very busy and hard to find,” he says.

What the data don’t show is that undergoing a renovation is emotional and taxing and just plain hard. And herein lies a clichéd, but unwavering truth: expect the unexpected.

Sowder remembers lying under a tent in the family’s backyard, feeling anxiety course through her. The kitchen remodel was in full swing and the family and their dog, Stella, were camping in their backyard. It had come to that. After trying to live inside the house while the crew tore up their kitchen, the four of them moved outside. It was O’Connell’s idea and hey, it was summer anyway. Wouldn’t it be fun? So what if he had to use a ladder to climb into the window of his home office every day and write a manuscript of his book amongst the blare of grinding granite?
Or that he had to cook his breakfast omelet on a hot plate in a makeshift kitchen in their garage? It was part of the experience. 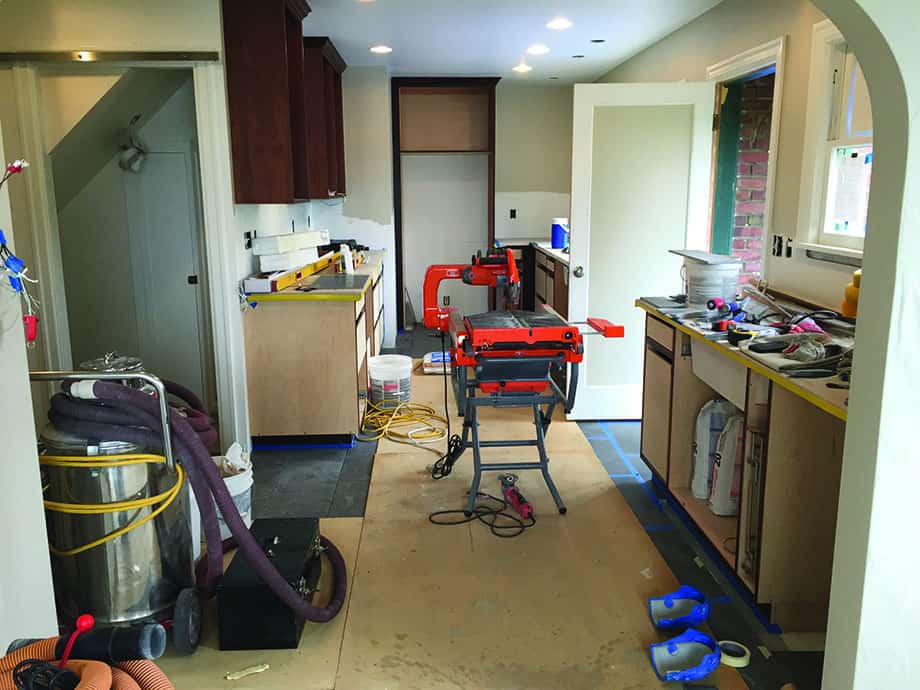 Meanwhile, their son got a second job to escape the cacophony and the dust. The family was eating meals cooked over a gas stove and the project, which originally focused on the kitchen, had expanded to include repainting and staining the floors on the main level. The workers, after all, were there, and the house was already ripped up. Costs soared from about $125,000 to $200,000, but it was all going to be worth it. That’s what O’Connell and Sowder believed, and that’s what they told themselves, but when night fell, Sowder found herself on the camping cot, worrying. Her beloved home was in such a state. What had they gotten into? What if this was all a big mistake?

“I would lie there and think, are we destroying the character of our house by doing this? Are we going to wreck the feel of it?”

The couple had purchased the Norman Cottage in 1993 for its storybook charm. Preserving that was a priority and luckily, they found a designer who understood their vision. Michelle Eastland, owner of Studio Misha in West Seattle, has worked with homeowners since 2006. She says the key to a successful renovation is understanding the psychological makeup of her clients.

“I want to know what is their tolerance for things going wrong,” Eastland says. “What are their hot-button issues? All of it comes up in a remodel.”

Eastland understood immediately what was important for the couple: flow, function and brightness. That meant removing a wall between the dining room and kitchen, and knocking out a strangely configured closet at the back of the house to add square footage to the kitchen.

Eastland also worked with them through challenges a lot of couples face, such as compromising on a color palette. Sowder loves purple. O’Connell, not so much. Eastland found them a countertop slab with hints of purple they both loved. O’Connell was determined to keep the walls light and bright – no purple paint – so Sowder agreed to cherry wood cabinets with purple undertones. 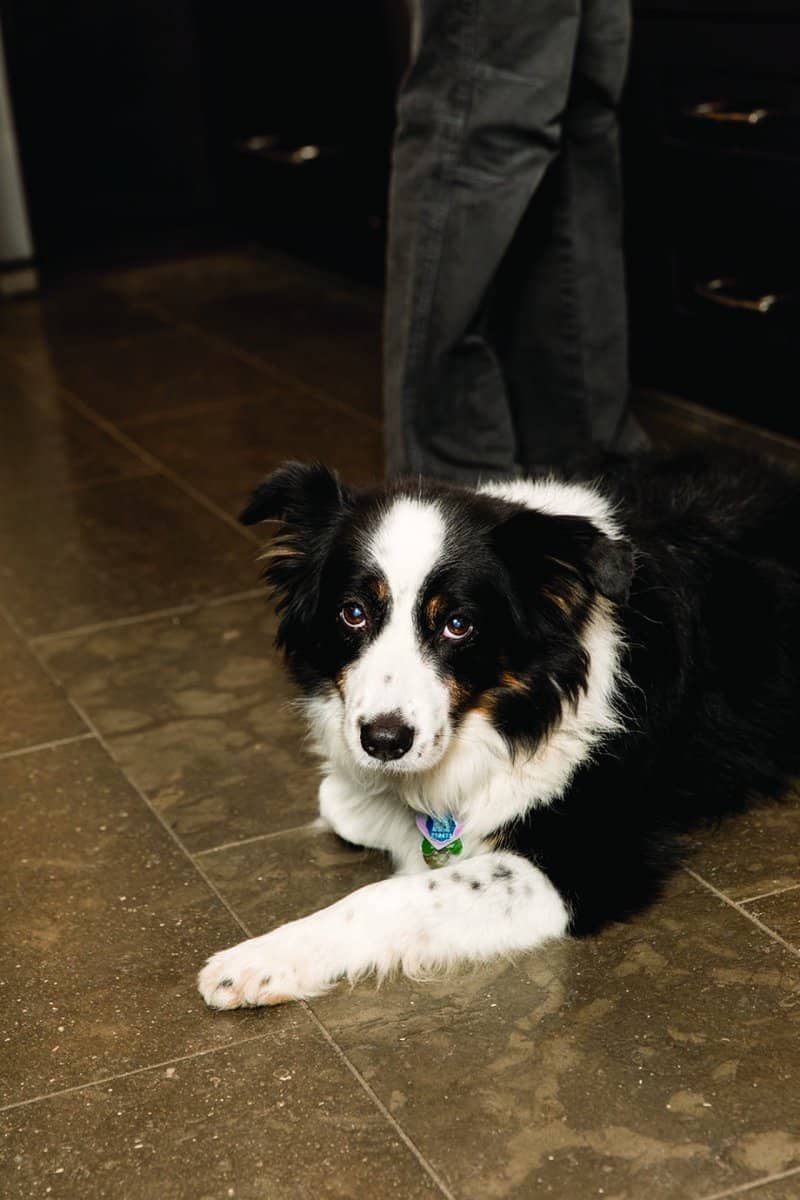 When the project took longer than planned, the family sucked it up. “You get used to the deprivation,” Sowder says. Along the way came another surprise: They became close with the crew. Sowder, a retired surgeon, admired the skill and precision of their handiwork. O’Connell, an author and writing teacher, valued their creativity and problem-solving skills. Even their border collie/Australian shepherd mix, who is suspicious of others outside her pack, had “switched allegiances” to the crew.

The project finally wrapped up months later. They were over budget and overly tired, but overjoyed at the result. Today, O’Connell says, he’s even happier.

“The money, that eventually leaves your consciousness,” he says. “What matters is having a great new space you enjoy. It was expensive and hard but we’re very, very happy.”