From farming hops to brewing, it’s a small step in Yakima 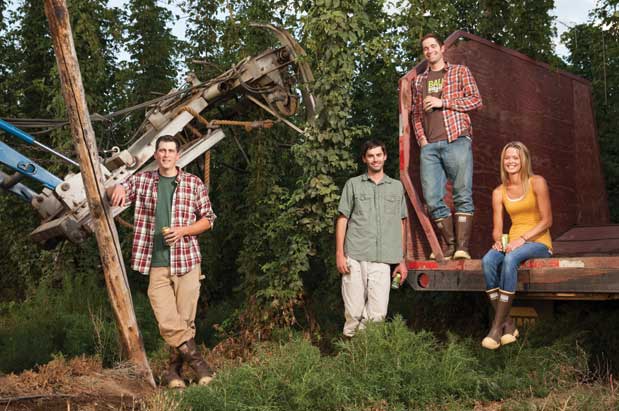 You might not know it, but each year Washington produces approximately 75 percent of the United States’ hops crop and 25 percent of the world’s, and virtually all of our state’s hops are grown in the Yakima Valley by a handful of families that have been doing it for generations. While the family farming tradition continues, some children of the hops have ventured off the farm. But they have not ventured far.

Oliver Brulotte, who opened Icicle Brewing in Leavenworth in 2011, talks fondly about growing up on a hop farm in Prosser, Washington. Along with his wife, Pam Brulotte, they considered continuing the family tradition and spent some time working in the family business, but decided they wanted to open a brewery instead. The Brulotte family keeps on farming, and although Oliver struggles to recall how many generations have been at it, he can tell you hop farming stories handed down from his great-grandparents. Large-format, historic photos of the family farm adorn the walls of Icicle Brewing’s tasting room.

Kevin Smith and Meghann (Smith) Quinn didn’t even leave the family farm to open their brewery; the siblings built Bale Breaker Brewing, which opened in April, in Field 41, right in the middle of the family’s hop fields just a few miles east of Yakima on State Route 24 (Meghann’s husband, Kevin Quinn, is in charge of sales). Mike Smith, the patriarch of the family, tells us that his eldest son, Patrick, will take over the family’s farm someday, and he glows with pride when he talks about what his other two children have brewing.

HOP SCHOOL
Each year in early September when the hop is high and the harvest is in full swing, one of Yakima’s hops brokerage houses, Hopunion (509.453.4792; hopunion.com) organizes Hop and Brew School, a two-day educational opportunity for the most ardent beer geeks. Most attendees are hardcore home brewers looking to perfect their hobby by learning more about this important beer ingredient. In addition to learning the way different hops—and various techniques for using them—impact different types of beer, students get a rare opportunity to visit the hop fields to witness the harvest, which is something of a spiritual experience for the most seriously afflicted beer nerds. A separate two-day session for professional brewers includes discussions about things like hops contract pricing and new hop variety research and development.