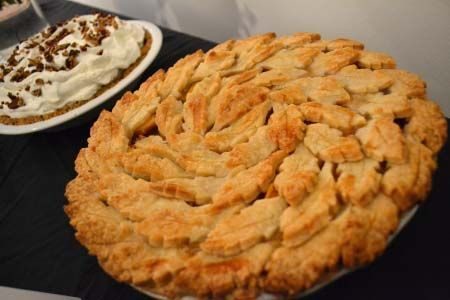 Cake versus pie? Judging from the responses I’ve gotten since finding out that I would have the privilege of judging the epic rematch of last year’s Cake vs. Pie competition last night, people are not wishy-washy on this matter. I’ve heard many a definitive statement to the effect of “Pie. Duh”; or “Clearly pie.” And truth be told, most folks who have weighed in to me have come out loud and clear on the side of Team Pie.

Well, just like last year, in the sequel to local food writer Jenise Silva’s sugar showdown from last year, pie won top honors again. Although the 100-strong crowd that packed itself into Vermillion last night was pretty evenly divided into the two camps, it just turned out that pie is the dessert most people would rather be stranded with on a desert island. It seems that most have the perception that pie is something you can do so much more with, from its variety of fillings (any kind of fruit under the sun to sweet potatoes, pumpkins, pecans or even savory meats) to the substance and quality of its shell. The best way to achieve the perfect crust is even harder to agree upon than the larger question of cake vs. pie itself.

There were a dozen or so contenders in each category. The pies, being more susceptible to the changing of the seasons, were heavy in the apple department, though there were a couple that bucked the fall trend completely with burnt cream or key lime and raspberry. Pie judge Carrie Mashaney, sous-chef at Spinasse, ultimately chose Barbara Schwartz’s Apple Pear Pie as the standout of the bunch, a classic formula with a simple twist.

All but two cake entries were chocolate of one variety or another: German chocolate, chocolate stout, triple chocolate mousse, chocolate raspberry mousse, triple chocolate mousse cake, s’mores cake, chocolate pumpkin with caramel glaze and so on. Here’s where the conventional ideas about cake go wrong, though—it’s entirely possible for cakes to reflect the nuances of the seasons and explore just as many flavor angles as pies can (I have recently made the acquaintance of a lavender cake with lemon curd and a Washington apple cake with apricot-infused meringue buttercream, to name just a couple). If there is a three-quel to this event, I would love to see more bakers try to stand out with subtleties like these, rather than all-out decadence.

When all was said and done, a gorgeous little flock of angel-shaped individual coconut passion fruit cakes stood out as the obvious cake winner. Brought in by Erica Anpo, a young interior architect by trade who also just happens to be armed with a culinary degree, her sleek homemade wooden cake stands got just as many oohs and aahs as her cakes themselves after they had been all snatched up to reveal her creation. A subtle Ibarra chocolate cake flecked with cinnamon, almond and orange had the most complex flavor of the bunch, and was a major coup for gluten-free fans everywhere with a solid second-place showing.

The final cakes and pies narrowed down to three each, it was then chef Neil Robertson, formerly of Canlis and Mistral, and his hyper-astute palette which decided the top winner in each category. “They didn’t blanch the almonds,” Robertson observed as he held one cake entry in his mouth. “I can taste their skins.” Um, wow.

Whether or not members of Team Cake will demand a chance to at last claim a victory next year remains to be seen. Winning a baking contest is satisfying indeed: in addition to the bragging rights of having baked the best cake or pie, last night’s bakers scored some great goodies, like monster-size bags of Bob’s Red Mill flours, artwork by Joey Veltkamp, subscriptions to Seattle magazine and gift certificates to the likes of Oddfellows Cafe, The Pink Door, Glazers and more. But the brilliance of Cake vs. Pie is the deeper questions it asks us, not just whose crust is flakier or which buttercream is the creamiest, but it requires us all to do some serious culinary soul-searching, and that’s worth revisiting again and again.

A big congratulations to the following winners: