Requisite restaurants for your next food trip to our culinary sister to the south. 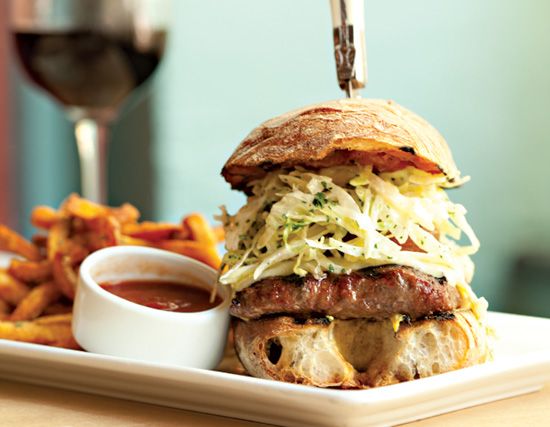 All Images by Hayley Young

Seattle’s food scene enjoys a bit of friendly (or fervent) competition with Portland.

The two cities tussle over the James Beard Foundation’s Best Chef Northwest award each year, and Seattle’s recent overhaul of its food-truck laws was a blatant attempt to catch up with Portland’s long-standing dominance in the realm of street food. Clusters—or pods—of carts continue to proliferate, as do new restaurants.

But while Seattle’s eateries tend to congregate in neighborhoods like Ballard and Capitol Hill, Portland’s new spots are flung across the city (though mostly in neighborhoods around the east side).

Just like here, chefs in Portland are busy opening second locations or spinoffs of popular existing restaurants, many of which continue our region’s love affair with meat. Here are a few new spots worth a visit on your next trip down Interstate 5. But diners beware: Most kitchens close by 10 p.m. One of the city’s most anxiously awaited expansions was the westside location of popular meat haven Olympic Provisions. Imagine an alliance of Capitol Hill butcher shop Rain Shadow Meats and Salumi Artisan Cured Meats, but with actual seating and a full menu of hearty plates, such as rotisserie chicken ($17 half/$22 whole), a porchetta sandwich ($9) and, of course, a thrilling charcuterie plate ($14/lunch and $12/dinner). The new Northwest Industrial outpost opened in April with a menu largely distinct from the eastside original; the butcher’s counter, however, is a fixture in both places. While the word “gristle” is somewhat less than appetizing, somehow it works for this meat-dominated northeast Portland pub. Chef Ben Meyer, who cofounded rustic restaurant Ned Ludd, and Alex Ganum, owner of Upright Brewing, joined forces to offer some of the city’s best beer alongside smoked kielbasa ($8), pork shoulder ($11) and other pork-based plates. The third partner, Marcus Hoover, is a restaurant designer whose affinity for wood produced a space that feels like a secret forest lair. The menu has an entire section labeled simply “salt,” with offerings such as a pretzel ($3), seasonal house pickles ($4) and pork rinds ($4), but vegetables also get ample attention.

While diners swoon over Little Bird, another French bistro across the river in southeast Portland has quietly built a following of its own. Lyonnaise-inspired St. Jack, which opened in December, has a cozy bistro vibe, complete with chalkboard menus and dripping wax candles, and a menu rife with delicious offerings, such as a seasonal seafood stew ($14) fortified with fish stock to balance the butter, and frog legs awash in garlicky butter ($12). St. Jack is a patisserie by day; 4 p.m. ushers in both savory food and lovely cocktails, like the De Rigueur ($8), a concoction of Scotch, grapefruit and honey.

Woodsman Tavern: (Clinton, 4537 SE Division St.; woodsmantavern.com) Stumptown founder Duane Sorenson is expanding from coffee to hearty pub fare. Former Olympic Provisions chef Jason Barwikowski is in the kitchen, and the restaurant (at press time scheduled to open this fall) will be one of just a few in North America with a high-tech Josper charcoal-broiler oven.

Castagna: (Hosford-Abernethy, 1752 SE Hawthorne; 503.231.7373; castagnarestaurant.com) One of the city’s most impressive restaurants saw its chef, Matt Lightner, leave this fall to open a restaurant in New York City. Sous chef Justin Woodward took over the kitchen and he’s making the avant-garde, foraged menu his own.

Aviary: (Alberta Arts District, 1733 NE Alberta St.; 503.287.2400; aviarypdx.com) One of the year’s most promising restaurants suffered a fire not six months after it debuted in February. Chef/owner trio Sarah Pliner, Jasper Shen and Kat Whitehead, whose collective background includes New York’s Aquavit and Alain Ducasse at the Essex House, are once again serving small plates with modern flavor combinations punctuated with classical French flourishes. At press time, a re-open date had not been announced.

Where to eat when staying warm and dry is a priority

The 9 Best New Restaurants in Seattle

Restaurants come and go every year, but these new spots are the sort of places we’re hoping will become perennial favorites.

We want to hear from you, opinionated person on the internet.