The Power of Two: Joule and The Whale Wins

Joule and The Whale Wins join the growing trend of restaurants finding strength in numbers. 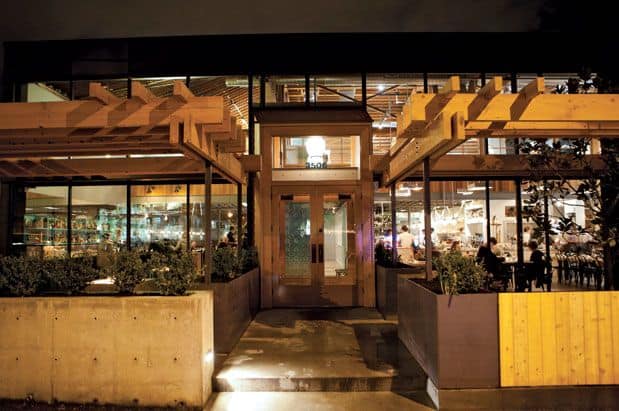 Restaurants and stores have long relied on shared traffic to drive business. As counterintuitive as it may seem, several restaurants in a cluster tend to generate more business for everyone, rather than stealing customers from each other. Funny how that works.

Lately, Seattle is seeing independent restaurateurs go a step further: They’re teaming up with each other to share space. It started a few years ago when Melrose Market opened in a converted garage on the west end of Capitol Hill. There, no fewer than six eating and drinking establishments—including the relocated Sitka & Spruce, the Taylor Shellfish store/oyster bar and an outlet of the local Homegrownsandwich chain—thrive on the constant foot traffic that the neighboring shops (cheese, meat, floral among them) and the other restaurants bring in. Ballard’s Staple & Fancy Mercantile (an Ethan Stowell restaurant) and Renee Erickson’s wildly popular The Walrus and the Carpenter oyster bar came next. Walrus lives just behind Staple & Fancy in the Kohlstrand Building, a window between the two restaurants keeping things chummy. (See also Wandering Goose.)

The benefits start even before the restaurants open. By hiring one contractor to do two build-outs, installing electrical and plumbing for both, the two restaurateurs save money up front. But the lasting benefit is that the two (and sometimes more) restaurants end up having greater allure together than either one would’ve had on its own.

The Whale Wins and Joule (which moved from its original location in Wallingford) joined the shared-space crowd in October, cohabiting on the first-floor expanse of a supremely airy converted warehouse coined the Fremont Collective (also home to Evo ski and snowboard shop). But a singular facade in Fremont at 3506 Stone Way N is about all they share: The two restaurants couldn’t look or feel less alike. Imagine the proverbial devil and angel—each on a shoulder. Joule is the former: dim, shadowy, sexy. As if to drive home the point, a fire pit blazes outside on the patio.

In its former incarnation, the bookish interior of Joule hardly hinted at the wildly good, radically original food the chefs and owners, Rachel Yang and Seif Chirchi, were putting out, and that mismatch—of fiery food in such a subdued setting—had its charms. But the new Joule has dropped the shy facade. It also has a broader appeal; it’s markedly less food-nerd friendly. There’s an entire section of the menu devoted to steaks (the best of which is a tenderloin with funky preserved tofu and fried shallots on top; $19), although the short rib with grilled kimchi is another delicious choice ($18), as are several not unexpected takes on vegetables, such as gai lan with walnut pesto ($9), and potatoes roasted in miso brown butter ($9). 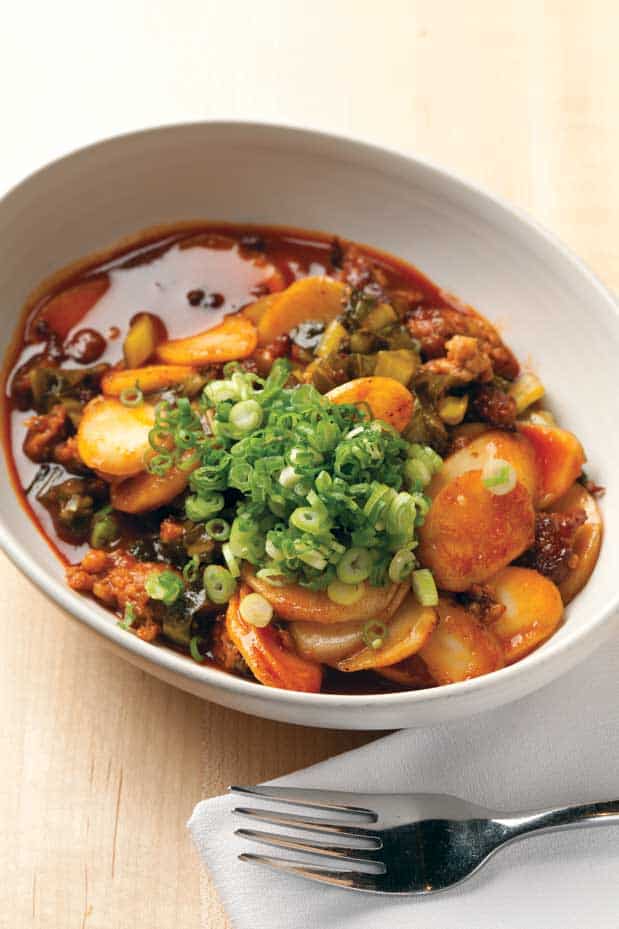 Rice cakes with chorizo at Joule

These dishes range from good to very good. However, with chefs this talented, it’s worth pushing outside your comfort zone. Order the toast with smoked bone marrow and oyster butter ($6), which will knock your eyes into the back of your head. Also go for the mackerel with an arresting green curry cilantro sauce ($17). Get two orders of the rice cakes (chewy, like mochi) in a seductive Korean chili sauce, hunks of chorizo strewn throughout, because it’ll be your new favorite dish ($12). There are slight clunkers here, including a tender pork chop woefully underseasoned and with too few apples and onions, and smoked tofu that is meh.

And then there’s the angel. The Whale Wins, across a shared entrance hall, echoes owner Renee Erickson’s Boat Street Café aesthetic: pristine white on white, like fresh sheets, with nooks carved into the white, tiled walls for displaying stacks of round logs destined for the wood-burning oven.

Servers in pressed navy-and-white pinstriped aprons fairly dance around the room, happily suggesting a Rosé to pair with your roasted chicken half. This is a wine-during-the-day sort of place, and it’s also at its best during the day, when it’s nice to share the grilled toast with curried tomato paste and grilled sardines under a tangle of crisp fennel ($8), the radicchio in buttermilk-poppyseed dressing with toasted hazelnuts ($12), and clams roasted and served in a sublime cream infused with thyme and lemon ($12 and $20). Come evening, the charms of the restaurant suffer a touch, because most dishes are served at room temperature. Room-temperature food feels most appropriate at lunchtime, but in the evening, the plates of roasted vegetables and even the beef tenderloin feel a little less special when they aren’t rushed to the table while warm. The few dishes cooked in the oven and served hot—as a tender hunk of pork roasted with apples, onions and mustard ($14 and $20), and the trout with a marvelous walnut sauce singing with lemon zest ($16)—are the dishes I’ll remember most. With the wood-fired oven in full view, I wanted more of the food to carry a whisper of wood smoke to the table. Very few do.

Still, there’s something very smart about the yin-and-yang approach the two restaurateurs have taken here. No matter which shoulder you incline your head toward, something very tasty awaits.

More Sharing on the Horizon

Chef Matt Dillon (Sitka & Spruce, The Corson Building) and Katherine Anderson (owner of Melrose Market’s Marigold and Mint) are teaming up on a mixed market/restaurant space in Pioneer Square (scheduled to open this spring), which will include a bakery, a wine bar and a flower shop. Tom Douglas’ Grange Hall—opening in April in the first floor of a new South Lake Union apartment building—will be multipurpose, too, though he’ll be sole owner of the restaurant, cake shop, grocery store and espresso bar.