The food paired with your brew has never been better, or more original. 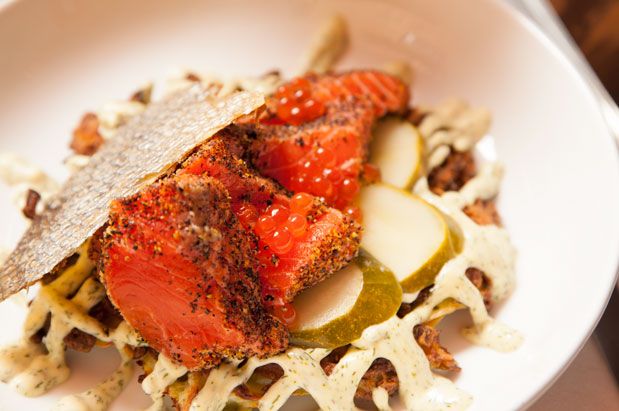 Seattle’s beer-brewing scene has been growing and maturing for decades. But this year, it boomed: Around a half-dozen microbreweries opened in Ballard alone (see page 100). And as the brews become bolder and more distinctive—including recent trends toward sour beer, cask ale and other beers explored in this month’s beer feature—the food made to pair with this generation of libations also has been inching its way into new, sometimes very unexpected, territory.

The boldest of the bunch are the guys at Gastropod (Sodo, 3201 First Ave. S; 206.403.1228; gastropodsodo.com), which opened this past April at Epic Ales, a SoDo nanobrewery already known for infusing its beer with mushrooms, miso, tea, even oysters. Hop onto a bar stool inside the snug space, carved into a warehouse on an otherwise quiet block, and order chef Travis Kukull’s casually brilliant food: a sensational corn and huitlacoche soup ($6), or nettle and ricotta profiteroles ($6) or roasted bone marrow ($9) with candied garlic and a zesty watercress salad, none of it fussy, all of it excellent. Kukull cooks out of an impossibly tiny kitchen, often while pouring draughts for customers, yet he somehow kicks out food as confident, interesting and smartly conceived as anyone in town. Seattle native Kukull, who previously cooked in Brooklyn, on Maui and at Tilikum Place Café in Belltown, and his small crew shuck and cold-smoke oysters to order (it’s fun to watch; they use a clear dome and a smoke gun). They make lamb belly BLTs ($9) and the sesame buns they’re served on. They make a terrific okonomiyaki (Japanese vegetable pancake, $12) topped with a perfect fried egg. They make duck leg and rabbit sausage ($15) and serve it with pineapple and almond chutney, and it all tastes really, really good. Every dish at Gastropod is made to pair with one of Epic Ales brewer Cody Morris’ creations. (The suggested pairing is usually listed beneath each dish on the menu; 6-ounce tasting-size pours are just $2.)

Perhaps Gastropod’s best feature is its playfulness. Morris and Kukull don’t seem to take themselves too seriously and appear to be having a ball, evidenced by one of Epic Ales’ mainstay beers, a fizzy light brew called Partytime. It’s used as a base for beer cocktails such as the Compartytime (Partytime mixed with Campari syrup), Fiestatime (Partytime with lime and salt—deliciously similar to a margarita) and Call of the Wild (Partytime with spruce tip syrup, made with tender tips of new-growth spruce trees). The regulars who hang at the bar call Kukull by his first name and make grim jokes about the pending foodie invasion. It’s the kind of place you want to tell everyone about, but, at the same time, hope no one finds out about. Gastropod is open from 4 to 10 p.m., Tuesday through Saturday.

Just south, down First Avenue a spell and situated next to a Vespa dealership in a more industrial area of SoDo is Schooner Exact’s family-friendly tasting room (SoDo, 3901 First Ave. S; 206.432.9734; schoonerexact.com) open 11 a.m. to 9 p.m. daily, where the brews—among them a very drinkable 3 Grid IPA and the autumnal King Street Brown—are paired with a menu of what seems like familiar dishes: bratwurst, say, or a pulled pork sandwich. That is, until those dishes arrive. Who’d expect such a prettily arranged pea vine salad, entangled with pine nuts and sopressata with lemon and garlic oil ($8)? Or such a sublime mushroom melt, with soft provolone and peppery mizuna ($9)? Probably the tastiest—and most surprising—plate is the bratwurst ($10), popping with juice and served a variety of seasonal ways, including on a mound of sherry-vinegar- and mustard-dressed potato salad. But then you find out that Schooner Exact’s owners and brewers, Heather and Matt McClung, hired one-time Tom Douglas “beer czar” Warren Peterson to oversee the kitchen, and it all makes sense. Schooner is open every day for lunch and dinner (and brunch on weekends), and there’s even a kids’ menu, with Ants on a Log for $4. The Pine Box (Capitol Hill, 1600 Melrose Ave.; 206.588.0375; pineboxbar.com), which is just over a year old but is already one of Seattle’s best spots for beer fans, recently brought in a little outside expertise to elevate its food game to the level of its estimable beer game: chef Scott Carsberg, who spent 20 years wowing us at Lampreia in Belltown. Inside the former funeral home (which also was previously a bar called The Chapel), the gorgeous space has formal architectural details that hint at the serious business that used to be done there. It also houses 33 taps with some of the most hard-to-find brews around: We’re talking breweries as obscure as Logsdon (from Hood River) and Howe Sound (from Squamish, British Columbia). If you’re smart, you’ll order the capicola pizza ($12), chewy crust and spicy meat, with a big, runny duck egg and a sprinkling of arugula spread over the top. Or try the stellar Italian sausage plate with a perfectly tender house-made pretzel and mustardy potato salad ($12). You can even order dessert to pair with your porter: the sensational stout chocolate Bundt cake ($6) will not do you wrong. Pine Box is open 3 p.m. to 2 a.m. weekdays and 11 a.m. to 2 a.m. weekends. (Above: Capicola pizza with duck egg and arugula, paired with Boneyard Brewing’s Hop Venom Double IPA, at Capitol Hill’s Pine Box)

Of course, if you’ve been a serious beer and food lover for any amount of time, you already know how lucky we are to have Quinn’s (Capitol Hill, 1001 E Pike St.; 206.325.7711; quinnspubseattle.com), chef Scott Staples’ gastropub, which set the bar for pairing beer and food when it opened in 2007. It’s better than ever. This is not pub food with an upscale twist; even if Quinn’s didn’t have a crazy-good tap list (which it does; heavy on Belgians) and a team of bartenders who have encyclopedic knowledge on how the beer was made (plus, they’re quick with tastes for the curious), it’d be a worthy destination for dinner just for the food. You can, of course, opt for the stellar burger ($14): A true thing of beauty, it’s made with Painted Hills beef, thick bacon and strong white cheddar, and it’s one of the best burgers in town. But I’d nudge you farther into the menu: The made-to-order beef tartare ($11) with a rich quail egg and rosemary toasts; braised lamb neck with gremolata and fresh chickpeas ($26); and even the fries ($6) with fontina fonduta and veal demi-glace are just beyond. Get there early or late (open 3 p.m. to 1 a.m. daily) to avoid the crowds and engage the bartenders.

Of course, wine tastes great with food, too. But the citrusy notes in a pilsner, the malty, sweet tones of a red ale, the palate-refreshing powers of a Belgian…maybe it’s time to rethink what you’re drinking with your dinner. A growing number of restaurants are taking beer-and-food pairings seriously, and so are your fellow diners. Look to your left and your right for like minds; you’ll know us by our beer guts.

Beer-and-food Pairing Dinners
Special beer-and-food dinners and events around town, including several hosted by the establishments mentioned in this story, are a delicious way to learn about pairing. Seattle Beer Week in May (seattlebeerweek.com) and the Craft Beer + Food event in late September (craftbeerplusfood.com) also provide excellent opportunities to discover the tasty possibilities. And still other eateries regularly host pairing events—sign up for their newsletters or follow them on Facebook and Twitter to get the early word, as these always sell out quickly. Here are a few of our favorites:

The Brave Horse Tavern in South Lake Union hosts regular Brewer’s Nights (taste several of one brewery’s beers and ask the brewer anything you want), along with occasional food-and-beer pairing events. bravehorsetavern.com