PubliCola Writers Moving Over to Crosscut 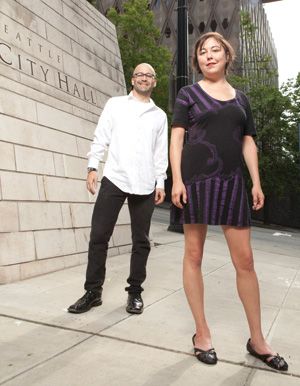 It’s really too bad that news blog PubliCola is suspending publication. However, we’re glad to hear that its senior contributors Josh Feit and Erica C. Barnett will continue to cover news part-time over at Crosscut.

Both Feit and Barnett were included in our “Most Influential People of 2011” list. Here’s what Seattle mag contributor Karen Johnson had to say about them then:

Back in 2009, when daily newsrooms were cutting back coverage of local and state politics, PubliCola cofounders Josh Feit and Sandeep Kaushik bucked the trend by launching a blog that mashed hyperlocal coverage of state and city politics with a dash of snark. “People were afraid that blogging would change journalism,” says Feit. “Instead, we believe journalism can change blogging.” Elevated by the bulletproof blogging of news nerd Erica C. Barnett, crime reporting by Jonah Spangenthal-Lee, and features such as “Think Tank,” a rotating who’s who of policy and political pundits—plus a website redesign—PubliCola shows no signs of slowing down. We’re rooting for more laugh-out-loud headlines like this one: “McGinn and Eyman, Sitting in a Tree, T-O-L-L-I-N-G.” -K.J.

If you’re a fan of these reporters, make sure to show your support over at Crosscut.

Truffle Salted Tater Tots and Other Signs of the Seattle Apocalypse

The End Times are nigh in Seattle. Here's proof.

Spence will move on after 23 years with the organization

A first time restaurateur with a background in 3-D animation and a penchant for modernist cooking is opening a restaurant on Capitol Hill this fall. Chris Cvetkovich gave me a tour yesterday of his upcoming project on 14th Ave. (in the REO Flats) that will be sandwiched between Artusi and Porchlight Coffee. Because Cvetkovich is…