In his new book Seattle author and UW professor David Shields answers the call of his own manifesto. 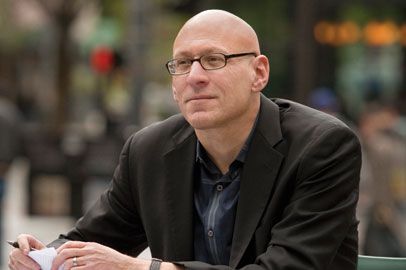 Seattle mag: What compelled you to write How Literature Saved My Life?

David Shields: I wanted to take [his previous book] Reality Hunger: A Manifesto…a call to arms to writers and other artists to dissolve the distinction between fiction and nonfiction and create new forms for the 21st century… and undermine its imperial tone by “vulnerabilizing” it; I wanted to reconstitute literature for myself after dismantling it; and I wanted to try to embody in practice what I had theorized about in Reality Hunger. SM: If forced to slap a genre label on this book, what would it be?

DS: Anti-memoir. Book-length essay. Literary collage. How Literature Saved My Life is an attempt to track a single theme (the relation of literature to life/salvation). I wanted to track my movement from ambivalence to despair to flirtation with suicide to finding literature… to rediscovering/reanimating a new kind of literature. See the last two lines—what the entire book has been building toward for 200 pages: I wanted literature to assuage human loneliness, but nothing can assuage human loneliness. Literature doesn’t lie about this—which is what makes it essential.

SM: Which book would you give to a friend who is struggling with depression?

DS: Maggie Nelson, Bluets (a brief meditation on the color blue), a cri de coeur about Nelson’s inability to get over the end of a love affair and a grievous contemplation of a close friend’s paralysis. The book keeps getting larger and larger until it winds up being about nothing less than the melancholy of the human animal. Why are we so sad? How do we deal with loss? How do we deal with the ultimate loss? It’s impressively adult—wrestling with existence at the most fundamental level.

SM: Which book do you find yourself reading over and over, and why?

DS: Simon Gray’s 4-volume Smoking Diaries. A man, whose friends are dying and who by the fourth volume is dying himself, stands before us utterly naked and takes account: Rembrandt’s late self-portraits, in prose. The gravitation is to always make himself look bad and, in so doing, of course, he renders himself loveable. Each book is held together by an understated but brilliantly deployed metaphor. An entire life, an entire way of thinking, comes into being. Having read the Diaries, I feel less lonely.

SM: In addition to literature, you reference a lot of movies in the book. Is there a film you feel portrays human loneliness in an especially truthful way?

Visit davidshields.com for information about David Shields’s next public appearances in Seattle.