The young Seattle actor has the lead role in Hedwig and the Angry Inch. 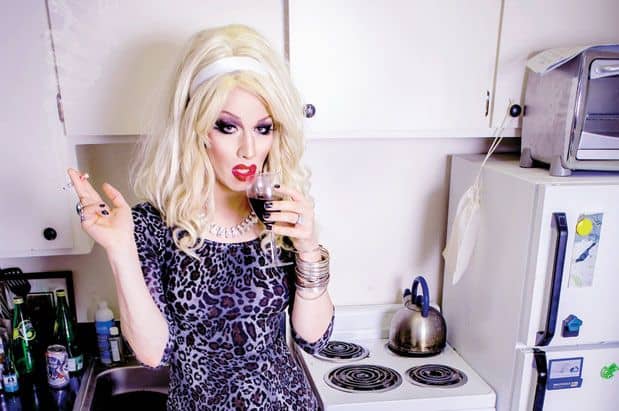 Seattle magazine: How long have you been performing?
Jerick Hoffer: I am 25 years old and I have been performing on stage since I was about 12 years old. I started in ballet, but soon I shifted my attention towards theater and comedy, and was in my first professional theatrical production at age 17.

SM: When you first encountered Hedwig and the Angry Inch, was it love at first sight?
JH: When I was 15, I found the movie version of Hedwig. I was a huge fan of The Rocky Horror Picture Show and I remember thinking, “This could be the next Rocky Horror.” Little did I know it would be so much more to me. I watched that movie and listened to the soundtrack over and over, and that year I went as Hedwig for Halloween. Soon I would start doing drag myself. It wasn’t until I was 18 that I learned that it was a stage show before it was a movie. That year, I competed in a statewide high school theater competition with the song “Wig in a Box” [from Hedwig] and won first place. It was love at first sight, and it just got stronger and stronger, and I couldn’t be more excited to get the chance to share my interpretation of this story.

SM: What draws you to the Hedwig character?
JH: Hedwig is a tragically beautiful heroine. She has endured so much hardship in her life, and it fuels the passion of her art form.… She has been through trauma I can’t imagine and that’s what makes her such an awesome rock star.

SM: What’s the inspiration for your drag persona, Jinkx Monsoon?
JH: There would be no Jinkx Monsoon without Hedwig and the Angry Inch. The songs in that show inspired me to create a character with a whole backstory; her own soundtrack. “Wig in a Box” is an anthem to the drag queen that has empowered me throughout my drag career. It’s about a person whose happiest moments are exploring the different sides of their personality and gender. As a drag performer, I can relate to that. Jinkx Monsoon is heavily inspired by my favorite female comedians: Sarah Silverman, Madeline Kahn, Lucille Ball, Jennifer Saunders, Maria Bamford…. But she is also an expression of my life. The ups and the downs.

SM: What’s your dream role?
JH: My all time dream role is Mrs. Lovett in the Sondheim musical Sweeney Todd. I would love a chance to portray that character earnestly, without a nudge and a wink to the fact that I’m a drag queen. It is one of my all time favorite musicals and given the chance I think I could perform a wonderful interpretation of this complicated character.

SM: Where else can our readers see you perform?
JH: I host “An Evening at Le Faux,” the number one celebrity impersonation show in the Northwest, every Friday and Saturday night (whenever I’m not in a play) at Julia’s on Broadway. Tickets and show info can be found at lefauxshow.com.