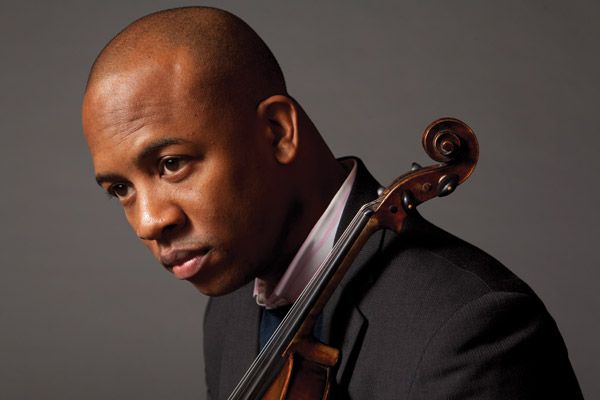 Just as this issue hits the stands, a young concert violinist who went to high school in Renton and now lives in Seattle’s International District is making his solo debut at Carnegie Hall.

On January 21, Dr. Quinton Morris—director of chamber and instrumental music and assistant professor of music at Seattle University (SU)—plays a program of the Chevalier de Saint-George, Gluck, Mendelssohn and Brahms (with Erin Chung accompanying him on piano) in the esteemed concert venue’s Weill Recital Hall. How did Morris get to Carnegie Hall? As the old joke goes: practice.

On a rainy evening last November, at the Starbucks near the SU campus, Morris spoke with palpable excitement about the (then upcoming) performance—a thrill hardly dampened by the fact that he has played Carnegie Hall once before. (A year ago, he played a sold-out show with pianist Maimy Fong and soprano Indra Thomas.)

“Last year’s show was a debut for all of us, so it felt more like a team effort,” he says. “This one is a solo debut, so I’m freaking out in a different type of way.”

Impeccably dressed, with a coral sweater vest and coordinated pocket square, Morris, 34, does not appear to be freaking out in any sort of way. He cops to his love of clothes, explaining, “My father always said, ‘A gentleman should look his best and smell good.’” Morris says at this point he has rehearsed so much that “the music feels comfortable” and he can focus on other things—such as what to wear. Tux? Tails? A suit with a tie? A bow tie? “It’s Carnegie Hall,” he stresses. “It has to be perfect.”

The performance ought to be pretty good, too. Morris believes when played correctly, a violin should resemble the human voice. “The violin was created to support the voice,” he says, “and my repertoire is very lyrical, so it has to sound like singing.” How does he achieve this? “I think about my favorite singers,” he says, listing a diverse crew that includes Beyoncé, Leontyne Price, Marian Anderson, Luciano Pavarotti and Luther Vandross. “I ask myself, ‘How would they sing this piece?’”

Morris has spent decades in pursuit of his violin voice. He picked up the instrument at age 8 and quickly took to it, continuing to play as a hobby while in college at Xavier University in Lousiana, where he was studying prelaw. But while there, a violin teacher told him that if he practiced more he could become a professional concert violinist. With this encouragement, and the support of his parents, he embarked on 8 years of music schooling—studying violin at the North Carolina School of the Arts, gaining his master’s in music at Boston Conservatory and finally, earning his doctorate at the University of Texas at Austin.

While in school at North Carolina, Morris befriended a few other African-American concert string players on the East Coast—and there were only a few, since jazz is the chosen genre of the majority of black string players. This band of outsiders lamented the lack of venues for young chamber musicians like themselves—until Morris decided to stop complaining and do something.

“I’m big on goal setting,” he says, “and when I have an idea, I see it through.” Hence, in 2002, he created The Young Eight, the first octet of African-American string players in the country. He wrote a business plan and a budget, he applied for a grant, and he launched an annual, weeklong summer festival to educate even younger black string players in the art of concert music. The Young Eight—whose membership now varies—plays classical music, but also collaborates with hip-hop and rap artists, opera singers, choreographers and young composers. The best part, Morris says, is that over the years, former Young Eight members have started their own similar groups—meaning the influence is expanding to ever widening circles.

Morris’ influence is felt locally, too. Last summer, Seattle Mayor Mike McGinn presented Morris with a Mayor’s Arts Award, thanks in part to the music program he developed at SU. In 2007, SU invited Morris—by then in the thick of a performance career—to help develop the school’s undergraduate music program.

“I told the dean, ‘I can build a music program, but it can’t be like any other program in the Pacfic Northwest,’” he recalls. Given his management experience with The Young Eight and his own career, Morris insists that students in the program (which is limited to strings, piano and voice) take 30–40 business school credits.

“They need to learn all the facets of building a business,” he explains. “Accounting classes, marketing plans, contract law. They can be musicians first, but they need to be prepared.” Acknowledging that this might not be what music majors had in mind, he laughs. “Some students may hate it right now, but they’ll thank me for it in two years.” The first class to complete the new program graduates this spring.

At that time, Morris will be on a three-month sabbatical, serving as visiting scholar at the University of Texas at Austin, performing, conducting lectures and teaching master classes. Agreeing that 2012 is already a big year for him (and he has two albums releasing this fall), he smiles appreciatively and says, “I’m very happy in my life.”