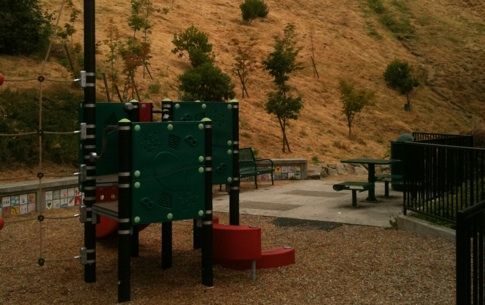 Everyone knows about the bigger, popular parks in Seattle’s family-friendly Queen Anne neighborhood, but we’ve found some hidden kid-friendly gems that are worth exploring. Next time you’re in Queen Anne, add one of these eight Queen Anne parks to your must-visit list!

12th West & West Howe Park
A tiny little neighborhood park that’s perfect for little ones, there isn’t much more than a sandpit and benches to sit on, but as parents know, sometimes that’s all you need for some outdoor fun! There is also a small patch of grass, so bring a blanket to sit on and a picnic lunch.
Located on West Howe Street at 12th Avenue West on the South West Slope of Queen Anne

Bayview-Kinnear Park (pictured)
Ever been admiring the view at Kerry Park and notice the little playground down below? This is Bayview-Kinnear Park! Not only does this playground have some of the coolest slides in Seattle, but the playground equipment is also very fun and innovative. Kids also love the rock climbing wall that’s built into the side of the park.
Located on W Prospect Street at Third Avenue West on the Counterbalance side of Queen Anne

Bhy Kracke Park
Jump in the car and head to this great park, tucked into the hillside of Queen Anne! Kids will love the playground area, and parents will love the seriously amazing views of downtown Seattle. There is also lots of grass for kids to run around in and a large undercover picnic area, perfect if it starts to drizzle.
Located at 1215 Fifth Avenue N, up the hill from the Seattle Center

Mayfair Park
What a sweet little park this is! Just a few blocks away from Queen Anne’s popular Rodgers Park, you’ll be surprised to find this play area tucked at the end of this block. A great place to escape a crowded playground.
Located at 2600 Second Avenue North, near Rodgers Park

Parsons Garden
Looking for a new picnic spot? You’ll be amazed by this gorgeous piece of picnicking heaven on Queen Anne! Located just down the block from Seattle’s famous Kerry Park, the garden doesn’t have a playground, but it does have a lush piece of grass and pretty flowers to peek at.
Located at Seventh Avenue W and W Highland Drive

Soundview Terrace Park (Rachel’s Playground)
Rachel’s Playground is certainly a neighborhood favorite, but families who live outside of Queen Anne may not know about this great playground and park. This park holds special meaning for Queen Anne residents – it’s a memorial to a special Queen Anne family.
Located at 2500 – 11th Avenue W

Trolley Hill Park
One of Queen Anne’s newer parks, Trolley Hill is another great spot to pack up a picnic lunch and enjoy some time outdoors. There isn’t a traditional playground here, but plenty of other fun things to keep little ones busy, including a P-Patch!
Located at Fifth Avenue N and Blaine Street

Ward Springs Park
With a super cool, big playground and fun grass hills to run up and down, Ward Springs is another one of Queen Anne’s newer parks that is still mostly used by people who live close by. Parents will especially love this playground because it’s set up off the road, so they don’t have to worry about little ones getting too close to cars.
Located on Ward Street at Fourth Avenue N

Red Tricycle offers ideas for cool things to eat, see, make and do with your kids in your neighoborhood. Sign up for your five fresh weekly picks for Seattle and Eastside Families.