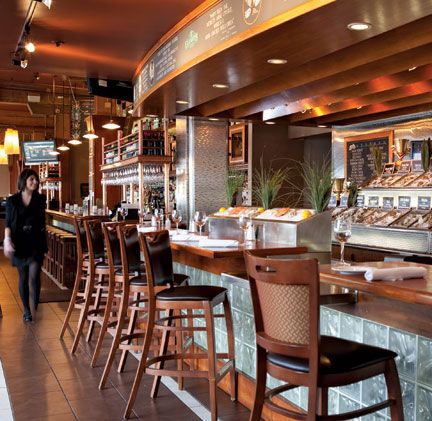 This article originally appeared in the August 2010 issue of Seattle Magazine.

Every August, our guest room fills up with friends from out of state betting on seeing the Seattle I swear exists: the one that doesn’t require an umbrella. Planning their itinerary, they ask the inevitable: “Where should we go for the best seafood?” And…hmm.

For the seafood-focused Best Restaurants issue of Seattle magazine in April, I visited and revisited many of Seattle’s fish houses, from spanking-new Blueacre to tried-and-true Chinook’s. I found startlingly good geoduck, the coldest oysters tasting of beach and sea, stunning sardines, ivory salmon, clams steamed in multiple ways, seared scallops aplenty. But to eat each of my favorite dishes in one night would require an epic Seattle restaurant tour.

So, recently, having failed to please my Midwestern in-laws on previous visits to two decidedly non-touristy local seafood restaurants (thanks to bad service and bad food), I caved. I threw in the towel.

“If you can’t beat ’em, join ’em.” And so we headed to the waterfront for dinner.

In an ideal world, alongside the inevitable chain restaurants, the Seattle waterfront would be home to the best our city has to offer—restaurants so good they’d be teeming with locals any time the skies beamed blue and clear over Elliott Bay. But, well, no. Our waterfront is mostly avoided by locals except when we’re hopping a ferry or when we’ve been dragged there to introduce out-of-towners to Sylvester the mummy at Ye Olde Curiosity Shop. A meal on the waterfront is sure to be three things: overpriced, over-clichéd and underwhelming.

And yet there we sat, having a hell of a good dinner at Elliott’s. Was I really tasting one of the best pieces of wild, troll-caught king salmon I’d had in years—perfectly bronzed from a hot oven, subtly smoky from the cedar plank on which it was roasted, flaking easily but far from overcooked ($36)—within mere feet of a group of five, in matching Sleepless in Seattle T-shirts, posing for pictures?

The team of chefs, headed by Robert Spaulding, also nailed the pesto clam linguini ($21), lively with fragrant, just-plucked basil and enough garlic to give it some punch, and hiding dozens of tender clams. Our server was smooth and professional, our martinis absolute ice-cold gin perfection. All of this, in what so many  consider a tourist trap?

Through the years I’ve regularly popped into Elliott’s bar for my favorite indulgence: a dozen perfectly shucked local oysters on the half shell and a slightly dirty martini. Even better is partaking during the progressive oyster happy hour (3–6 p.m.), when the fresh-shucked beauties start out at 50 cents each and go up 25 cents each half-hour (they’re usually $1.50 and more a pop). There are literally dozens of varieties to taste, and no better oyster bar in Seattle. But a foray deeper into the menu?

It turns out those oysters are also sensational when fried ($14 as an appetizer, $23 as an entrée). Tender, still quivering, they’re irresistible when dipped into the tasty tartar sauce. (Avoid the other dip, a barbecue-like whiskey sauce that clashes with the fresh oyster flavor.)

But those rumors of inconsistency we’ve  heard? They’re well earned. On a subsequent visit I suffered through a cioppino ($31) that, while chockfull of fresh local fish, mussels and clams, was served in a thick, harshly acidic, almost salsa-like tomato sauce. A sirloin steak, which I upgraded to “Oscar style”—topped with Dungeness crab and béarnaise sauce ($41)—was served rarer than requested and was supremely forgettable, despite (or maybe because of?) the gussying. Desserts are flashy in a dated way—a squiggle of caramel here, a stack of waffle cone and ice cream there ($9). It’s obvious when a crème brûlée ($6) arrives warm on top but shivering cold on the bottom that the kitchen is aiming for good enough, not great.

Service is also uneven. You’ll most likely luck into a pro who will wow you with her wit and efficiency, deftly offering an extra oyster, say, to make up for a long wait for drinks. But you could just as easily fall between the cracks. On one Friday night, two managers chatted with each other while we craned and waved for their attention from 10 feet way, to no avail. (One of those same managers had poured us martinis so watered down they nearly spilled over the tops of the glasses earlier in the evening.) Wine may arrive in sync with, or long after, entrées; water glasses may be topped off repeatedly, or left empty for 20 minutes (I counted). I experienced exceptional and, frankly, awful service during my three meals at Elliott’s.

Despite my hopes of proving the snooty foodies wrong and actually uncovering a culinary gem on the Seattle waterfront, I’m back where I started. For oysters, a little vitamin D and some pinot gris on that coveted patio, and, oh, that fantastic salmon, you can bet I’ll go back to Elliott’s. But it seems a shame that, when so many are celebrating birthdays and anniversaries there, and so many out-of-towners are doling out big cash for what might be their only taste of our city’s legendary seafood, a more consistently good meal can’t be had. For now, it remains a gamble.