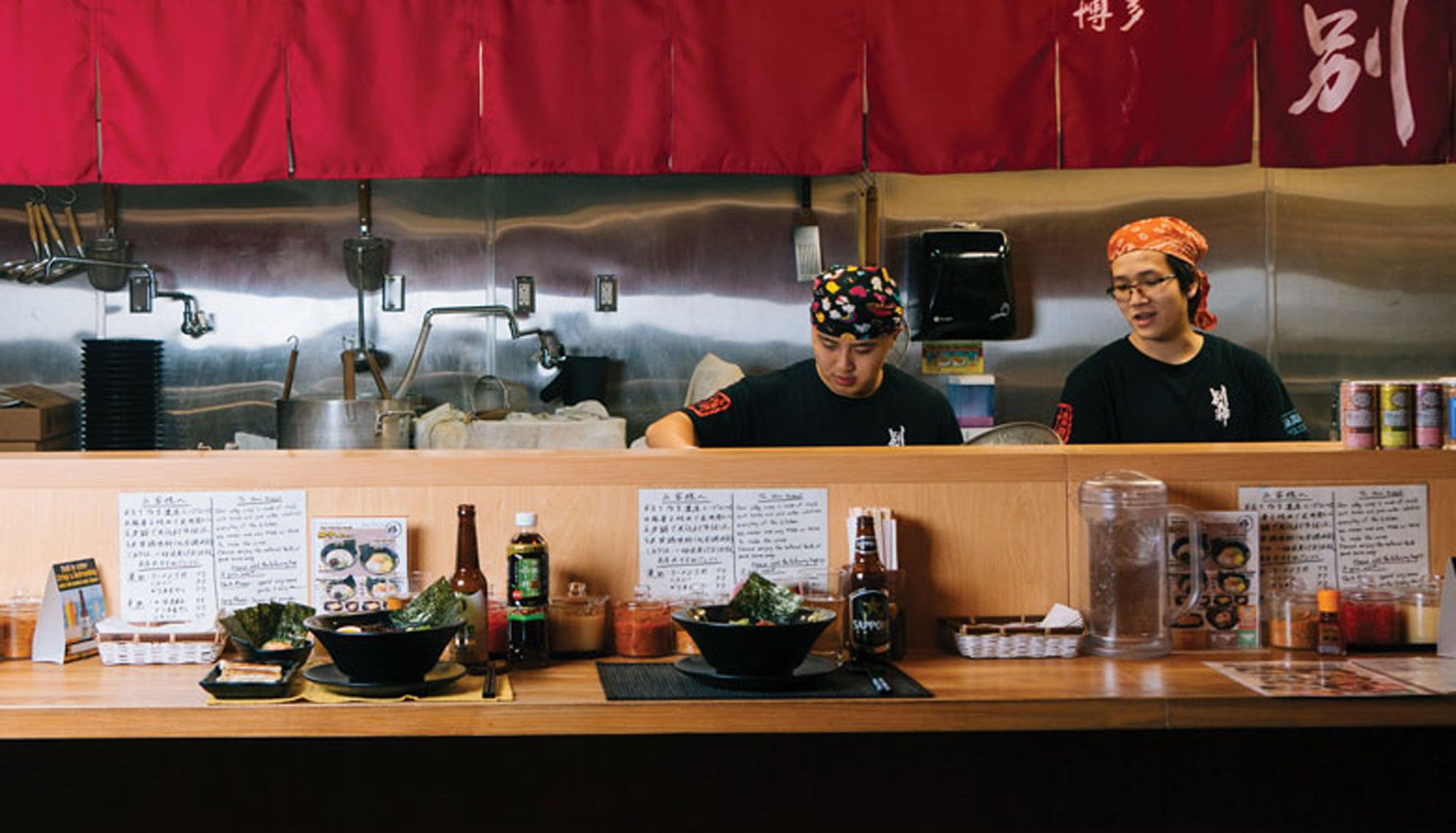 Ramen is to Japan what pizza is to America: a regionally variable iconic food you can buy ready to-heat up at home (but you maybe shouldn’t) and with which even the “bad” stuff is still pretty good. It wasn’t long ago that Seattle’s best bowl of ramen could be found at the Chinatown–International District’s Tsukushinbo, but only on Fridays. And while that’s still a solid option, ramen is now so popular you’ll find it on menus at mainstream restaurants owned by the likes of Josh Henderson and Tom Douglas.

One of the most authentically Japanese experiences—down to the counter seating and bottles of beverages like Asahi and Calpico—can be found at this Capitol Hill noodle shop, which is actually owned by a Hong Kong company. The house specialty is Hakata-style milky pork broth (tonkotsu) from the southern island of Kyushu, although there’s a prawn-miso soup offered as well.

Our Pick: The thin, white noodles pair best with the simple tonkotsu broth ($11.25), which ramen devotees won’t find as salty as at other locations; if you’d like a more pungent flavor, top your ramen with soy sauce, Japanese chili powder or pulverized garlic available at the table. Capitol Hill, 954 E Union St., Suite 102; restaurantji.com/wa/seattle/betsutenjin-ramen

Tentenyu (Closed as of September 2018)

A place that began as a staple on Kyoto’s ramen scene has made its way to an industrial brick-and-concrete Capitol Hill spot—via the Los Angeles area, where there are two Tentenyu outlets. One hundred pounds of chicken bones are reportedly boiled down into 100 bowls of ramen, resulting in a special broth that toes the line between light and rich.

Our Pick: The toripaitan, or all-chicken white broth, ramen ($11.95) doubles down on the chicken factor with gingery, tender chicken meatballs instead of the popular pork slices. Not surprisingly, the karaage (Japanese fried chicken, $6.95) is also good. Capitol Hill, 1510 Belmont Ave.; 206.257.4289; tentenyu-us.com.

What takes 20 hours to simmer takes 10 minutes to slurp up: Here, a cloudy pork bone broth is seasoned with dried fish and kelp for maximum umami punch. This Japanese import has been a popular Bellevue destination, and now has a dark, modern University Village location that makes for a quick lunch après shopping.

Our Pick: The northern Japanese island of Hokkaido is known for its miso ramen, so go for the hearty tonkotsu miso ramen ($12), served with wavy yellow noodles. Add a molten-yolked aji-tama (marinated soft-boiled egg); Santouka’s is one of the best we’ve had. University District, 2626 NE University Village St.; 206.524.4431; santouka-usa.com.

Traditional it’s not, yet this Capitol Hill restaurant serves some of the most delicious ramen in the city. The music from the kitchen is loud, the seafoam walls are bare and the menu takes some creative liberties, but chef Chong Boon Ooi knows what he’s doing—he was trained in French techniques and learned about ramen while working in Hawaii.

Our Pick: It’s hard to beat the spicy kotteri ramen ($13.50), a dark, deeply flavorful bowl, thanks to black garlic oil and your choice of heat (go for level two for a pleasant spiciness and lingering tingle, thanks to Szechuan peppercorns). The sliced chashu (roasted pork) that sits atop is perhaps the most tender and flavorful in town. Capitol Hill, 1416 Harvard Ave.; 206.568.7669; ooinkwa.com.

Formerly called Kukai, this Japanese franchise has expanded quickly throughout the area, most recently adding a restaurant near the Din Tai Fung in Westfield Southcenter mall. The menu at these hip, bustling shops is extensive, with nearly a dozen ramen choices plus other Japanese bar foods, such as gyoza, croquettes and edamame.

Our Pick: The Tokyo-style shoyu (or soy sauce) broth is classic—an inexpensive ($8) bowl for ramen purists. Customization is possible here—you can get low-sodium broth or choose your noodle type—but it’s pretty damn good as is.  Multiple locations; kizuki.com

Editor’s Note: Ramen Danbo in Capitol Hill was not open as of press time.

Broth
Broth styles can be broken down into four general types:

Noodles
Traditionally, ramen noodles are cooked al dente, though at some places you’ll need to ask for them to be left firm.

Dining Etiquette
Loud slurping is not only socially acceptable at ramen restaurants, but encouraged, allowing you to eat more quickly while the soup is still hot.