7 Great Tastes from the East Coast 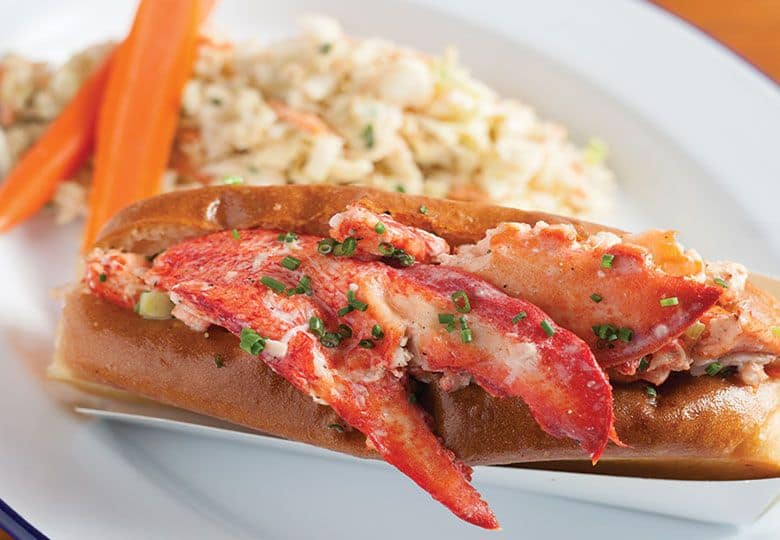 In an East-meets-West showdown, our cross-country coast dwellers rival us in their love of—and access to—amazing seafood. Though fans of fried Ipswich clam bellies and the best blue crab will still have to travel for those favorites, we’re happy to know there are great bialys, cheesesteaks and lobster rolls to be found nearer home.

Grinders
New Jersey Italian Sub
While the nomenclature gets complicated—can anyone actually describe the difference between a hoagie, grinder, hero and sub?—we can all agree that the East Coast beats the West when it comes to sandwich composition and proliferation. Shoreline’s homey Grinders, though, could be straight out of Jersey, with the mega sandwiches to prove it. Most are served hot (the meatball is excellent), but our favorite is the cold cuts (salami, ham, mortadella and capocollo) classic: The Bambino ($9.25).
Where Else To Find It: At Mean Sandwich, former New Jerseyans Alex and Kevin Pemoulie just added their popular Italian sub special to the permanent menu in December.
Grinders, Shoreline, 19811 Aurora Ave. N; 206.542.0627

Gilbert’s on Main
New York Matzoh Ball Soup
“A delicatessen is more a social institution than it is a restaurant,” owner Steve Gilbert states on the restaurant’s website, which manifests itself in this New York-style Jewish deli’s décor, service and menu. You’re here as much for the size of the matzoh ball in the soup ($9.99)—somewhere between baseball and softball—as you are for the flavor, as much for the presence of a pastrami sandwich ($19.99) as the meat itself.
Find More: If you’re looking for the best-tasting pastrami in town, hit up Pastrome, a pastrami startup without a physical location.
Gilbert’s on Main, Bellevue, 10024 Main St.; 425.455.5650 Photograph by Angela Ciccu. The matzoh ball in this soup from Gilbert’s on Main is almost as big as the bowl it comes in

Bagel Oasis
New York Bialys
People from all over the country have opinions about where to find the city’s best bagel—and most of them are still looking. But only true New Yorkers zero in on the best bialy. Without the hole or pre-bake boiling stage, the bialy is tougher, homelier and—with its onion-filled center—more flavorful. But while the bagel garners national fame, this ugly stepsister stays hidden in the shadows for those who know to look for it. The best local bialy ($1.75) can be found at the classic bagel shop Bagel Oasis.
Where Else To Find It: For the next evolution in bagel flavors, stop by Pinehurst’s Standard Bakery for its twice-baked everything croissant filled with cream cheese.
Bagel Oasis, Ravenna, 2112 NE 65th St.; 206.526.0525

Heyday
Rhode Island Johnnycakes
Chef Jay Pyfer first heard of this Rhode Island specialty in an episode of The Sopranos in which a diner cook tells Tony, “Here’s your johnnycakes. I gotta warn ya, they’re addictive.” Intrigued, Pyfer looked them up and made them with what he had at home. His version of johnnycakes ($9) are similar to pancakes, with yellow instead of white cornmeal and nontraditional ingredients like cheddar cheese and green onions. It’s not what grandpa—or Tony Soprano—sits down to at a Providence diner, but it’s still darn good.
When To Go: Johnnycakes are available only at brunch, which is served only on Saturdays and Sundays.
Heyday, Mount Baker, 1372 31st Ave. S; 206.829.9816

Calozzi’s Cheesesteaks
Philadelphia Cheesesteak
In Philadelphia, everyone has a favorite cheesesteak, be it the neatly stacked sandwich at Tony Luke’s or the down-and-dirty version at Dalessandro’s. Similarly, in Seattle, there are those loyal to the stalwart version available downtown at Tat’s, and those who love this tiny Georgetown corner shack, where the overstuffed sandwiches ($10.25) come from the Dalessandro’s school of steak. Mounds of thinly sliced and finely chopped meat explode out the top of this sandwich, which is also the only thing on the menu (in various permutations).
Know Before You Go: Let them know if you want onions by saying “wit” or “wit’out” and your choice of cheese—don’t be afraid of the Philly classic choice of Cheez Whiz. It’s practically a necessity.
Calozzi’s Cheesesteaks, Georgetown, 7016 E Marginal Way; 206.762.1777

Seattle Fudge
Atlantic City Saltwater Taffy
Even though it doesn’t actually contain any salt water, saltwater taffy has been particularly popular in coastal cities since its emergence in Atlantic City in the late 1800s. In the Armory, tourist hot spot Seattle Center’s food court, the nostalgically sweet Seattle Fudge shop makes its taffy ($17.95 per pound) fresh in-house, in batches of as many as 300 pieces at a time—with traditional flavors, such as vanilla, chocolate and strawberry, and more unique ones, such as cinnamon, green apple and watermelon.
What To Order: Ask for the current “mystery” flavor when you go in for a taste, because they’re always switching it up.
Seattle Fudge, Seattle Center, 305 Harrison St.; 206.441.0524

Bar Harbor
New England Lobster Roll
In new england, lobster rolls are everywhere—in Seattle, you’ll find the best (of only a few) at South Lake Union’s stylish Bar Harbor, owned by Maine native Ben Hodgetts. And you won’t be settling for a substandard roll. The sandwich—knuckle and claw lobster meat perched in a split-top white roll ($20)—is wonderful by any account (if a tad skimpier on the lobster). You can get your lobster tossed in mayo or (our preference) warm clarified butter.
What To Order: Don’t miss the whoopie pie ($6), another New England classic, for dessert.
Bar Harbor, South Lake Union, 400 Fairview Ave. N; 206.922.3288