The beloved bakery's new flagship is churning out chocolate in addition to pastries. 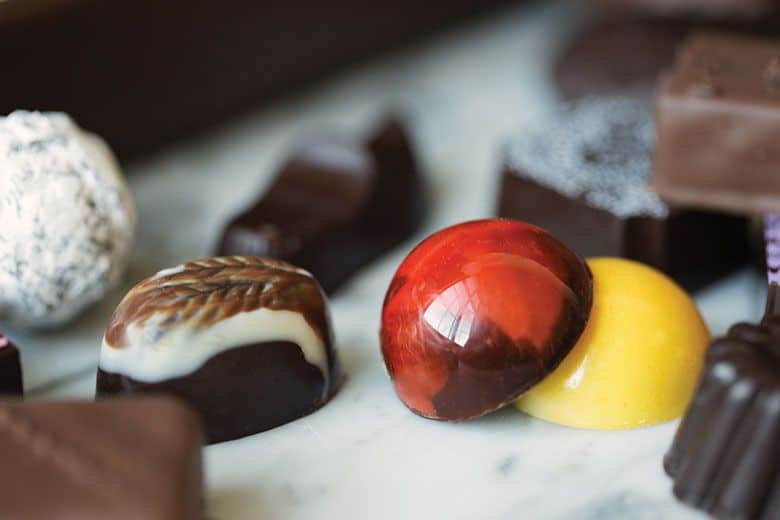 Years ago, on an otherwise forgettable day, I found myself at Bakery Nouveau. I waited in line. I bought a twice-baked almond croissant, an item that still comes up again and again when Seattleites talk about their favorite breakfast pastries. It was still warm. The first bite was so good, I actually teared up a little.

Now, Bakery Nouveau owners William and Heather Leaman have expanded the reach of their legendary pastries (and beautiful baked breads, French-style cakes and savory sandwiches) beyond their original 12-year-old West Seattle bakery and their Capitol Hill location, opened in 2013. Their new bakery, which opened last September, is in Burien.

At 7,500 square feet, the Burien location is the Leamans’ biggest space, and done in the same white-and-wood nouveau style as the others. “We wanted somewhere we could plant our flag in the ground for the next 50 years, in case the kids want to take over,” William says. They originally looked to acquire a larger building in West Seattle, but kept losing out to cash offers and escalating costs. “What I really wanted to do is chocolate. It’s my hobby. It’s my love affair,” he says. And for that, you need space.

Indeed, the Burien shop sits above the Leamans’ new chocolate factory, which you can peep at through a glass panel in the café’s floor, an area that visitors gingerly step around (although it’s totally safe to step on). There, William can pursue his passion: bean-to-bakery chocolate. He explains that he’s loved working with chocolate since his days at the Essential Baking Company, where he helped build that empire (and made some delicious chocolates). But for many years, “chocolate took a back seat to the bakery driving the car,” he says. Now, he’s got the space to produce 20 tons of the stuff a year—with the cocoa beans sourced from farmer relationships he already had in growing regions such as Guatemala and Venezuela. At press time, he was creating a signature chocolate bar for the store, and planned to make enough chocolate to whip into mousse, fill croissants and layer in decadent cakes. There will also be expanded offerings of the house-made truffles and themed holiday chocolates; look for heart-shaped boxes around Valentine’s Day.

If you’re hoping for a Bakery Nouveau in your own neighborhood, don’t get excited. When asked if he was planning to pursue the kind of growth he built while at Essential, William says, “Absolutely not. One wife, two kids, three bakeries: I’m done.”