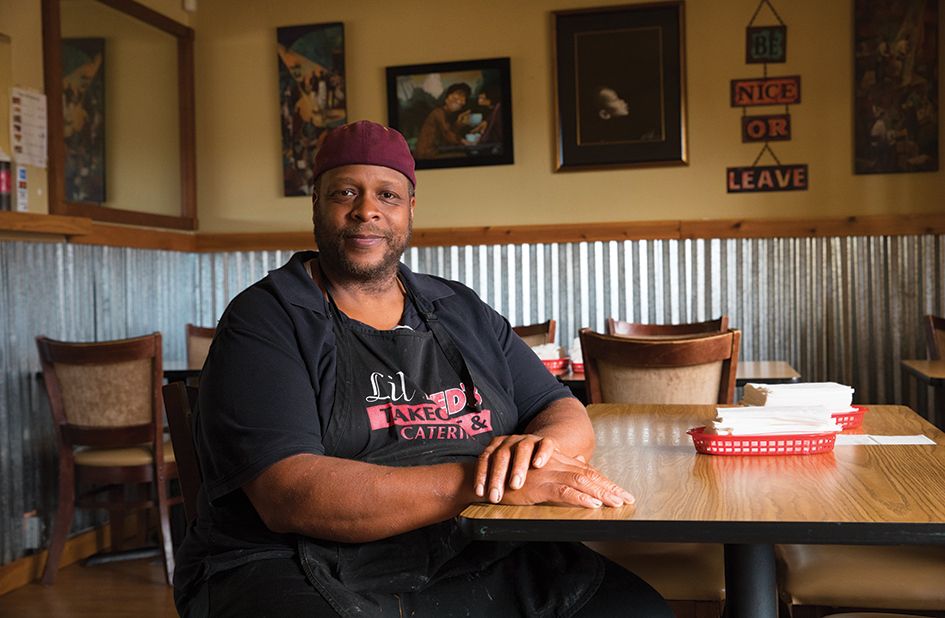 All photographs by Alex Crook

As winter settles in, the menu at Lil Red’s Takeout and Catering (Rainier Valley)—which, despite the name, does have seating—changes from light summer dishes to cool-weather comfort food. Among the hearty offerings are smoked meatloaf, chicken alfredo lasagna and clam chowder. Also heralding the new season, the smoker gets loaded up with prime rib, ham and jerk-spiced turkeys for holiday celebrations.

It’s an odd mix, but Erasto “Big Red” Jackson doesn’t want customers to ever become bored at his restaurant. Instead of sticking to one type of food, he brings together the soul food recipes learned in his grandma’s kitchen, the Jamaican tradition of his wife Lilieth’s heritage and all kinds of other culinary tricks he’s picked up over the years. Many of those skills were gained while working as a busboy at a downtown hotel, experimenting in his own kitchen, and asking friends to teach him their specialties—which is why you’ll find Filipino lumpia side by side with pulled pork sandwiches and Jamaican curry goat. The key to achieving big, bold flavors and tender meats, Jackson says, is to take your time

The only thing as surprising as Lil Red’s menu is the story behind Jackson’s decision to open the restaurant. About 10 years ago, as a Sara Lee franchisee with a dream to do more, Jackson was watching the Queen Latifah movie Beauty Shop and in it, noticed a roving vendor selling food to people getting their hair done. Inspired, he called a friend with a barber shop and started bringing around plates of barbecue and eclectic comfort food dishes to shop customers—dishes that are now on his restaurant’s menu. Selling only on weekends with just a dish or two each day, he expanded delivery to auto shops, and eventually to workers at the Port of Seattle.

In 2014, Jackson left is job with Sara Lee to deliver meats for Mondo & Sons, which is owned by the father of a high school friend. (Jackson, a Seattle native, attended O’Dea High School on First Hill.) But when Mondo moved operations to Tukwila, Jackson decided to make his own move: He took over Mondo’s low-slung building on Rainier Avenue and turned it into Lil Red’s, the brick-and-mortar embodiment of his mobile operation, in 2017.

It’s there that he and a single employee prepare the menu of classic barbecue from different regions of the country, Jamaican specialties and soul food, all entirely from scratch. Putting the former meat company’s old equipment to good use, Jackson grinds his own meat for the lumpia, smokes and slices all the deli meat, and makes all the sausages in-house, “like restaurants used to,” he says.

The key to achieving big, bold flavors and tender meats, Jackson says, is to take your time. “No shortcuts.” But he does have one secret advantage when it comes to the dessert case: generations of skilled bakers in his family. His wife makes the rum cakes, his mom bakes the mini pies, and the 7-Up pound cake is from his great-grandmother’s recipe, passed down to and prepared by his aunt.