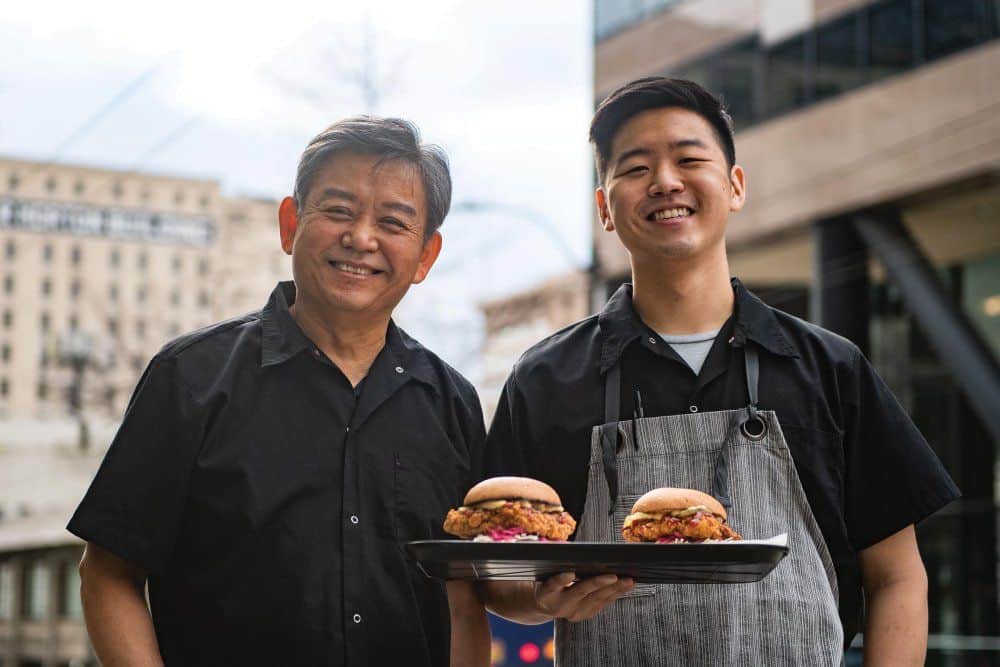 Fried chicken sandwiches are now as common in Seattle as coffee shops offering oat milk, but the one at Market Fresh stands out among the pack.

Its buttermilk-brined thigh is double-dredged and fried to order, sporting a crisp, nori pepper-dusted crust. It’s then topped with sticky pineapple gochujang [red chile paste], thin shreds of cabbage, pickled onion, toasted sesame seeds and garlicky aioli, all squished between a brioche bun. This beautifully drippy thing is sweet, spicy, crunchy, tangy and the brainchild of 26-year-old chef Justin Choung, whose parents, James and Hye Choung, have owned and operated the restaurant since doors first opened in 1990.

As a self-serve hot bar stationed inside the once-abuzz Fourth & Madison office building, Market Fresh struggled when Covid-19 hit [two other locations are temporarily closed].The vast majority of sales had come from regular patrons and pedestrians, including office workers and tourists trekking en masse to sightsee, but that screeched to a halt last March. With only a fraction of average sales coming in, no social media presence to reach new customers, a buffet-style business model and a raging pandemic, something had to change. And it had to change quickly.

Taking over the family business so soon was never part of Choung’s plan. Throughout his early 20s, he’d cooked his way across the globe, from an omakase counter in Manhattan to a three-Michelin-star sensation in Stockholm. He shared kitchen space with legendary mentors like Ariki Omae and Björn Frantzén.

The next move would have been to continue his fine-dining career in California, but then the world suddenly stopped spinning. Staying in Seattle to creatively pivot Market Fresh into a contact-free operation was a no-brainer.

“Having Michelin standards ingrained [in] me through stressful situations, it was a huge curveball to step up and take on my family’s humble grab-and-go buf-fet,” Choung says. “I had no intention of giving up a lease to the property that my father had poured so much of his energy and sweat into.”

Choung got to work. For the first time in three decades, the menu underwent a transformation, inspired by the casual “family meal” he often prepared for staff of the upscale restaurants where he’d cooked in the past. “We felt the need for guilty pleasures to feed our stomachs for the upcoming onslaught of dinner service,” Choung says.

With the help of friend and photographer Ryan Sullivan, their social media presence gained traction. So did the sandwich. “What’s really fun for me is to see guests who routinely walked in our doors prepandemic come in again, order that sandwich and say, ‘I would never have expected Market Fresh to end up selling a fried chicken sandwich and be so good at the same time,’” Choung says. It’s much more than breaded thigh on a bun. It’s the turn of a new page.

Eventually, Choung intends to open his own restaurant. But not until he’s done Market Fresh justice.

“My father has worked tirelessly to make sure that my sister and I could have a proper education growing up. I have to figure out how I can ensure my parents will be all right for the years to come,” he says. “We’re honored to keep our doors open to feed the people who walk in to eat our food. And we refuse to give up. I believe the city needs mom-and-pop stores just as much as we need the city.”