Kick It with Kebabs from Seattle’s Only Ghanaian Food Truck 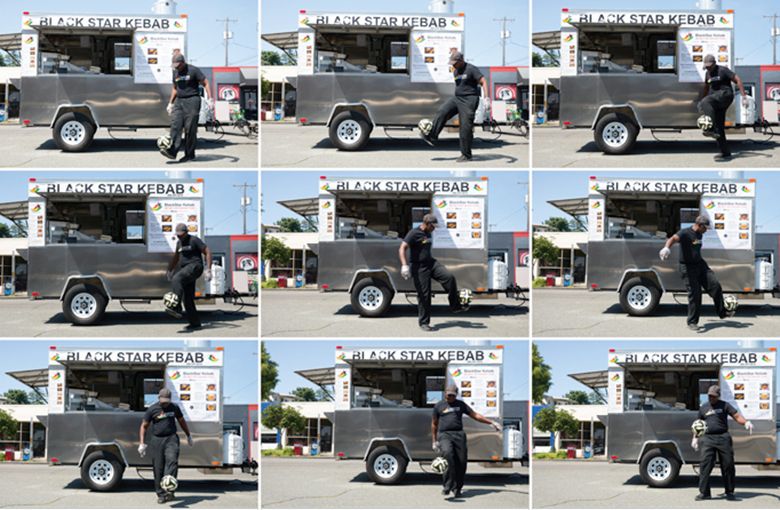 Editor’s Note: BlackStar Kebab owner Priestwick Sackeyfio was recently in an accident and though he’s fine, his food truck is currently nonoperational. Follow him on social media or website for updates.

Seattle’s only food business serving Ghanaian cuisine has none of the spicy stews, fried fish and thick starch called fufu that you might find at a home-style Ghanaian restaurant. Instead, BlackStar Kebab, a small silver trailer of a food truck, sticks to the simple street food its name reflects. It parks outside breweries and, more often, in front of Magnuson’s Arena Sports, an indoor soccer facility that was part of the inspiration behind owner Priestwick Sackeyfio’s decision to launch his business.

A former semipro soccer player from the West African country of Ghana, Sackeyfio has been a fixture in the local youth soccer scene since the ’80s, coaching neighborhood teams and elite clubs, and running his own summer camps. He started working for Arena Sports in 1998 and began noticing that adult indoor league players would stay and enjoy a beer after they finished their games, but the only food available at the facility was popcorn. “I heard too many complaints [from players],” he says of the lack of food. “In Ghana, you drink beer on the beach, then you eat kebabs.” Skewered, grilled meats such as beef, lamb and chicken are perfect for lazy afternoon snacking or replenishing after a game. Besides, Sackeyfio had noticed another thing: While people in Seattle had many options for food from the likes of Thailand and Japan, nobody had tapped into real African street food yet. So, in 2015, with no previous restaurant experience, he started his food truck business, naming it after the nickname for the Ghanaian national soccer team because he knew soccer players, even here in the U.S., would recognize the name. But it was hardly necessary: Anyone who has played youth soccer in Seattle within the past 35 years recognizes the smiling man handing over the heavily spiced skewers, sticky caramelized fried plantains, and a tomato-flecked, onion-studded jasmine rice dish called jollof rice ($12 for a combo plate with all of these items).

The 11-spice mix Sackeyfio uses is so proprietary, even he doesn’t know how to make it; it’s shipped to Seattle by friends in Ghana who have a kebab stand there. But he promises that the flavors at BlackStar will be familiar to any tourist who has been to Ghana, drank a beer and grabbed a kebab. This isn’t a meal that Ghanaians would eat at home: “A real Ghanaian meal is fufu and fried fish,” he says, and for that, Seattle will have to wait for a Ghanaian restaurant. But until then, kebabs and jollof rice are here to tide you over.