Vibrant Japanese street food destination Taku, in the heart of Capitol Hill, may be perfect for when life returns to normal 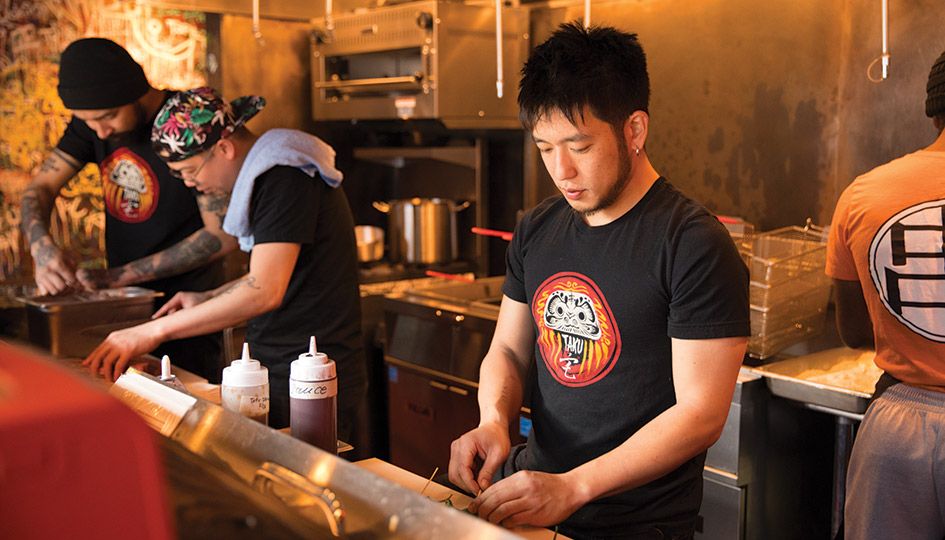 The last person I hugged who wasn’t a family member (read: cellmate) was Shota Nakajima. It was March 11, the Wednesday that school was canceled, right around the time I first heard the term “social distancing.” Coincidentally, on that same Wednesday, Nakajima was opening his colorful new restaurant, Taku, a place reminiscent of the casual, late-night spots you’d stumble into after a work shift in Osaka.

The doomsday cloud was just settling over Seattle—I could actually find a parking spot on Capitol Hill in midafternoon. The chef—still young enough to be thrice nominated for the James Beard Award for Rising Star Chef of the Year—greeted me with open arms inside the doorway of Taku, which is decorated like an anime version of a Japanese alleyway. I’d already developed an aversion to friendly physical contact, but hadn’t yet come up with a sly way to dodge an embrace in favor of an elbow bump. It was still too early in the unfolding of our distorted reality. So, I went for the hug. After all, Nakajima seemed totally unfazed that he was opening this new establishment just as restaurateurs like Tom Douglas and Ethan Stowell were laying off hundreds of employees. I wanted to embrace his enthusiasm.

To hear Nakajima tell it, Taku is about comfort. His other restaurant, Adana, was built as a temple to hyperseasonal, refined Japanese food served in a multicourse menu format; there, the skills he acquired while working for a Michelin-starred restaurant in Osaka are evident. But as much as Nakajima loves Adana, he says he actually doesn’t enjoy tasting menus himself. (“I’m one of the most impatient humans!” he says, flashing his megawatt smile. “I just want everything to come out at once.”) Conversely, Taku is the kind of food-driven bar where, Nakajima says, he actually wants to have a drink and catch up with friends. Together, the two very different places make up the whole of Nakajima’s life as a chef.

At Taku, the small mix-and-match menu revolves around the humble kushikatsu: panko-breaded proteins and vegetables (from traditional options like chicken and shishito peppers to more inventive choices like Brie and bacon-wrapped asparagus), skewered for easy eating with one hand while holding a cocktail in the other. The kushikatsu is crunchy, salty, deep-fried on the outside and perfectly cooked on the inside, even the persnickety ingredients like scallops. And the simple cocktails—like Japanese whisky mixed with Coke or sparkling water—are worth a mention, as they’re only $10 and mixed in batches for faster service. Order at the counter.

Under normal circumstances, this spot couldn’t help but succeed, with its inexpensive drinks, well executed comfort food, and a vibe and decor so unusual they make you feel like you’re somewhere special, all in Seattle’s hottest nightlife destination. But is that enough right now? I checked in on Nakajima just one week after opening. In that week, Governor Jay Inslee had decreed that restaurants and bars were to close or offer only takeout. Nakajima, like other enterprising business owners around town, was doing his best to adapt. He’d closed Adana for the time being, but hoped to keep Taku open, selling bento boxes and other grab-and-go items. He wrote back, the ebullient energy already gone from his tone: “[I’m] trying my hardest. Not gonna lie, [this is] probably one of the hardest things emotionally I’ve gone through in a long time. Chin up, chest out, as they say.”