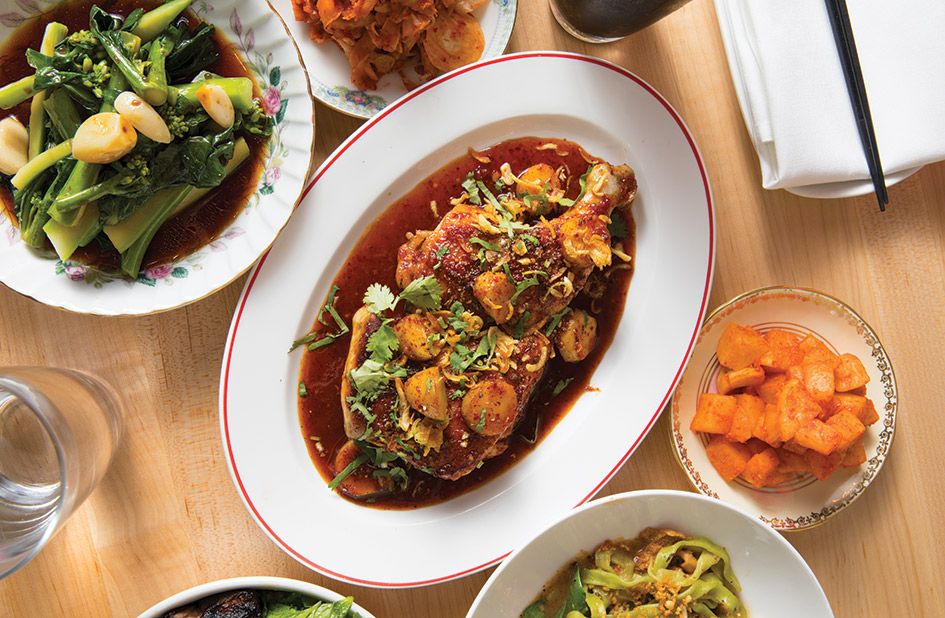 This article appears in print in the April 2020 issue. Click here to subscribe. Due to evolving public health concerns related to the coronavirus (COVID-19) outbreak, be sure to check with restaurants for updates on hours, to-go ordering and possible closures.

When Revel first opened in 2010, chefs and owners Rachel Yang and Seif Chirchi had yet to become well-known names in the Seattle restaurant scene, having only opened Joule three years earlier. And they had yet to become finalists for the prestigious James Beard Award for Best Chef Northwest six years running. Rice bowls, Yang says, were still pretty new, at least on Seattle restaurant menus. As a concept, modern Korean fusion (a term that does little to communicate Yang’s unique amalgam of French technique, Korean flavor and American comfort food) didn’t yet have food nerds clamoring for tables.

But Revel’s popularity, both as a neighborhood fixture and a dining destination, grew; if someone came once, that diner likely came back. In early 2018, the restaurant (and its adjoining bar, Quoin) had to vacate its home on the corner of N 36th Street and Phinney Avenue N to make way for new construction, but instead of closing the restaurant, the couple relocated it to South Lake Union as a sort of long-term pop-up. In January, they moved Revel back to the same Fremont corner, holding down the ground floor of a building Yang says the landlords built around the restaurant.

“South Lake Union was great,” Yang says, though she admits it didn’t feel like home, for a variety of reasons. “But here [in Fremont]…everyone comes here for a reason. Every person who’s come in says, ‘Welcome back, we missed you.’ It gave us a renewed sense of commitment.” Maybe it’s that renewed energy that gives Revel 2.0 a palpable buzz, complemented by a mix of awe from newcomers drawn by the reopening (or perhaps because, for the first time, there are windows looking into the dining room now) and gratitude from loyal, longtime enthusiasts. The new restaurant feels bigger, but Yang insists the square footage hasn’t changed. The centerpiece is the same 26-foot-long maple butcher block counter, along which the best seats in the house are situated. There’s still a bar, but it’s now in a dedicated corner of the main dining room, not a separate entity with a door, as Quoin was. And best of all, at least from a cook’s perspective, Revel’s new kitchen and prep area have better functionality. Yang had a hand in the redesign of those areas, and the prep area now has a much more convenient main-floor location. (“No more hauling hot rice up and down the stairs!” she says.)

The marriage of old and new can also be found in the menu. Regulars should fear not: The short rib rice bowl with pickled daikon, mustard greens and an egg yolk ($19) is still one of the best lunches in the city. The house-made dumplings, in flavors like mapo pork with pickled leek ($14), are still worth the extra time they take getting to the table. But Yang is playing around with new dishes, too, inspired by changes she’s seen in the way people are eating now: There are more shareable meat dishes on the dinner menu (get the excellent brick chicken in sweet, spicy Korean barbecue sauce with duck-fat-fried potatoes, $18) and a greater emphasis on vegetables (the Chinese broccoli with hazelnuts, $10, is a must). In addition to the all-day items, the lunch menu now features soft steamed buns cradling crispy cod or pork ($12). As always, the house-made condiments and pickles are essential; Yang says she’s now using tamari exclusively, instead of soy sauce, so the menu is largely gluten-free.

What will the next 10 years bring? With the two restaurants here and Revelry in Portland, Yang and Chirchi are quick to downplay any concrete plans. But we’d wager South Lake Union won’t be without a Revel—in some capacity—for too long. Chefs Seif Chirchi and Rachel Yang with their two boys