In a city of great sandwiches, two newbies are contenders for king. 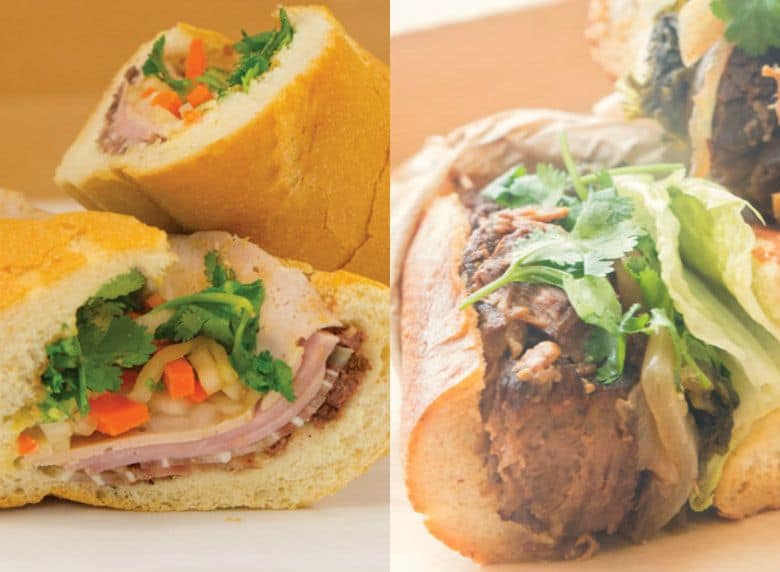 In one corner, we have Lan Hue, a bright Vietnamese restaurant in the Chinatown/International District’s Pacific Rim Center, where a pink Vespa with a basket full of baguettes lures passersby to stop in for lunch. Opened last July, the eatery is helmed by owner Huy Tat—whose uncle and father ran a Saigon banh mi shop of the same name in the ’70s. They’ve carried over the family recipes, and Uncle Mon Tat is still in the kitchen, making everything from bread to pâté to mayonnaise from scratch.

The menu consists of more than a dozen sandwiches and is divided into three sections: Seattle, Paris and Saigon. Order the dac biet, the standard banh mi “with everything” order, for the café’s best representation: a crusty loaf generously stuffed with house-made meats and pickled veggies, and a true steal at $4. (Other places may charge marginally less, but aren’t making everything in house.)

In the other corner, we have Pink Bee, a humble Ballard sandwich shop (in the former Malena’s Taco Shop), where the sandwiches are filled with Thai flavors. “Pink” and “Bee” are the nicknames of sisters Pawara Chivapat and Ariva Intrachupongse, who grew up in Thailand, where their parents ran a restaurant called Peung Chompoo, or Pink Bee.

In the U.S., Chivapat helped her family open Jamjuree in Capitol Hill, but since 2004 has been working as a mail carrier. Now, her dream has come to fruition: a restaurant of her own, where Thai flavors—beef panang, chicken satay—end up folded into a Dutch crunch roll or served over rice (both $9.50). Go with the sandwich for the sake of trying something new, and try the tasty braised pork seasoned with Chinese five-spice, soy sauce and palm sugar.

Which is the winner? This one is too close to call.