Seattle’s Best Barbecue from Around the Country

Throughout the area, pit masters do their best to imitate their favorite kind. 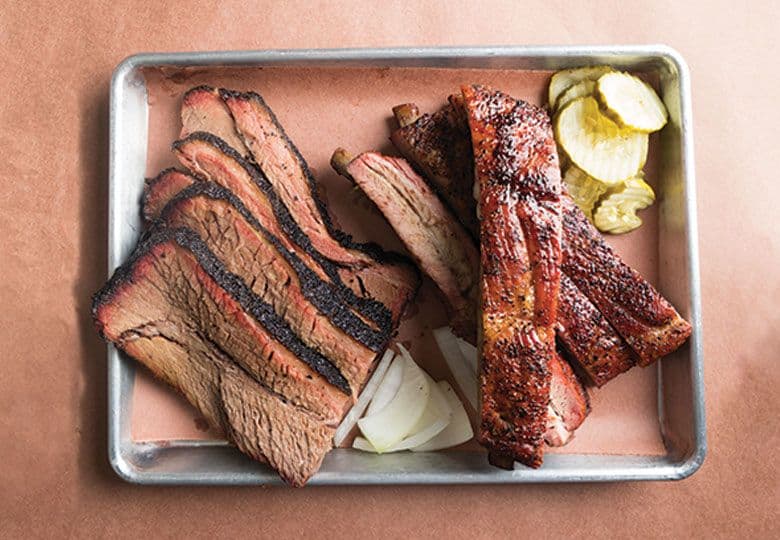 That the meat is cooked slowly over low heat and with smoke is about all that ties together the barbecue styles from various regions of the country. From the whole-hog tradition of North Carolina to the trendy Texas brisket, each state has its signature sauce or custom cut.

Smokin’ Pete’s BBQ
North Carolina
Sometimes called “the one true barbecue,” cooking the entire pig at once (whole hog) is practically a sacred art in the South, so it’s worth picking up the phone to order the “Carolina Pig Pickin’” dish ($24.95/ pound) from Smokin’ Pete’s, a catering-only spot.
Smokin’ Pete’s BBQ, Ballard, catering only, 1918 NW 65th St.; 206.783.0454

Emma’s BBQ
Memphis/Arkansas
Memphis-style barbecue is all about the ribs, and Arkansas’ is all about the sauce. Emma’s owner, Tess Thompson (daughter of the original Emma), combines them for a unique take ($22/pound for ribs) with a generous serving of very traditional Southern hospitality and a mean blackberry lemonade.
Emma’s BBQ, Hillman City, 5303 Rainier Ave. S; 206.413.1523

Woodshop BBQ
Kansas City
Hickory- and oak-smoked and blackened with spices (they call it their “sawdust rub”), the Kansas City–style ribs ($26/slab) at Woodshop BBQ are a tender, falling-off-the-bone regional treasure making a rare appearance in the Northwest. They’re best supported by the fried mac-and-cheese balls ($5) as a side.
Woodshop BBQ, Central District, 2513 S Jackson St.; 206.485.7381

R&L Home of Good BBQ
Louisiana
There’s no mistaking the heavenly scent of wood smoke at R&L, where one orders sauce-doused Louisiana-style ribs ($17) in the same manner as other customers over the restaurant’s 65 years: eyeing the unchanged signage and unmatched hospitality, both gently but sternly reminding diners to be patient and pay with cash.
R&L Home of Good BBQ, Central District, 1816 E Yesler Way; 206.322.0271