Speakeasy in the Spheres Is as Extravagant as It Sounds

Renee Erickson’s new spot is unlike anything in the city 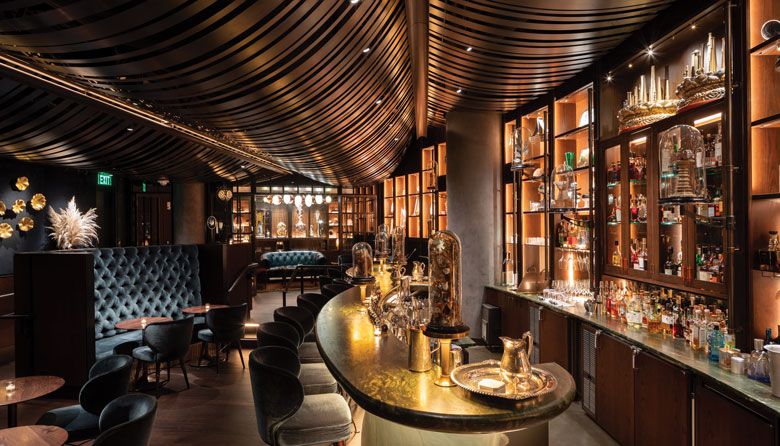 Nautical-themed bars are nothing new in Seattle; they’re not even new to Renee Erickson, who’s built an empire on oysters and whimsy and clever sea-related names. But the renowned chef’s new spot, Deep Dive, which she opened with co-owners Jeremy Price and Chad Dale in late August deep in the belly of Amazon’s greenhouse Spheres, takes the idea of a theme bar and turns it up to 11. And somehow, it doesn’t come off as campy.

Erickson worked with a team of people to bring Deep Dive to life, including Curtis Steiner, the Ballard gallery owner and art curator, who was commissioned to fill the beautiful space designed by Graham Baba Architects. Amazon’s main request for the space was that it be a speakeasy, one that would be open to the public and have its own entrance (the Spheres are only accessible to Amazon employees and guests). “My challenge was to make [the speakeasy] a cool idea,” Steiner says, “since it’s been used [so much]. There was this sort of fear that it could have gone really south and ended up a pastiche of a speakeasy.”

Instead, Steiner created a dark, velvety space and filled it with a museum’s worth of curios, from antique water spigots presented in a kind of shrine above the bar to a series of stunning and tasteful seminude photographs (a gorgeous woman cloaked in giant leaves) that greet visitors at the door. Some of the spot’s most interesting features were personally designed by Steiner, others are artifacts collected from around the world or on loan from his own collection. Steiner’s vision: the lair and private library of a design-driven botanist—one who loves the geometric aesthetic of seed pods and the iridescence of mother-of-pearl—housed within the the city’s magnificent biosphere. The Chill Pill has emerged as one of the bar’s most popular drinks, and it goes well with the high-class Seattle dog

Design may be front and center here, but Erickson’s menu of creative cocktails and bar-friendly foods matches the dreamy vibe. The standout is a Seattle dog with whipped cream cheese, pickled jalapeños and onions, and pink salmon caviar ($18). It’s yet another sign of the bar’s extravagance—but then, if Deep Dive weren’t so outrageously over the top, it wouldn’t be enough to match the Spheres. South Lake Union, 620 Lenora St.; 206.900.9390