Check out five of our favorites 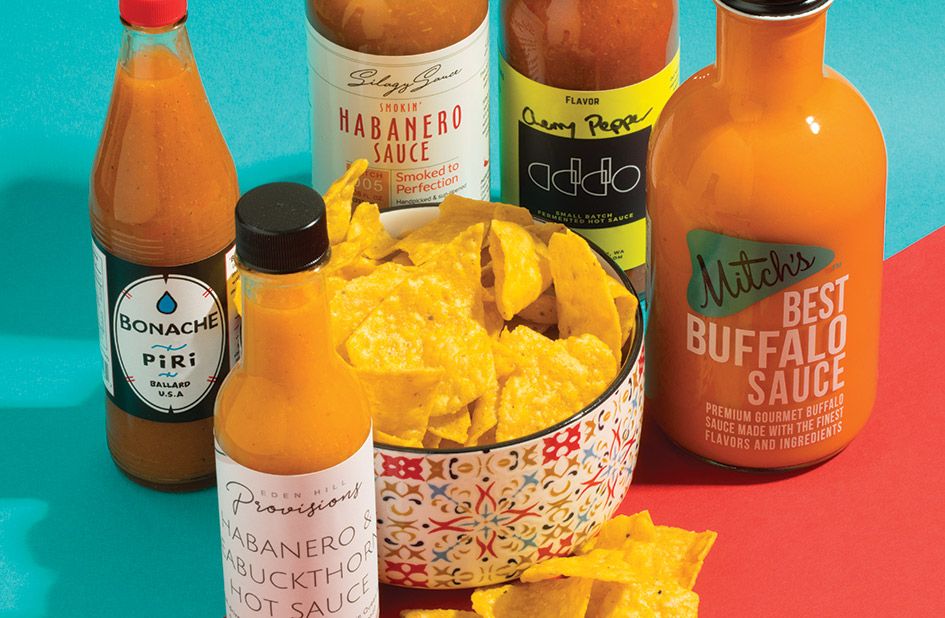 Long relegated to saving boring egg dishes everywhere, hot sauce has finally earned a seat at the dinner table, and we’re here for it. Whether you’re a spice wimp or a heat freak, there’s a lot to love in our locally produced sauces. These five bottles, ranked from mild to tear-inducing (in a good way!), should be in your fridge right now.

Mitch’s Best Buffalo Sauce
Mitch’s
Buffalo sauce has long been considered a chicken-wings-only affair, but Issaquah’s Mitch Pumpian is working to change that. Pumpian developed the first version of his secret recipe in 1990, when he was a corporate chef at the now shuttered Ed Debevic’s in Los Angeles. Now, Mitch’s Best Buffalo Sauce ($10) is sold by more than 20 local retailers, including the Made In Washington stores peppered throughout western Washington. The sauce brings the creaminess of ranch dressing with the gentlest of kicks to any breakfast sandwich, burger or fried food. It’s good on pretty much anything but dessert, jokes Pumpian. Spice rating: 1 star

Addo’s Rotation of Hot Sauces
Addo
You never know what you’re going to get from Addo chef Eric Rivera (which is a good thing), and his fermented hot sauces ($12), made in small batches of 70–100 bottles, are no exception. Though the flavors vary based on produce availability and Rivera’s mood, our favorite was a cherry pepper sauce, with its perfect balance of smoke, tang and heat. Whichever bottle you pick up from the Ballard restaurant will surely be a good one. Ballard. Spice rating: 2.5 stars

Smokin’ Habanero Sauce
Silagy Sauce
This family affair started with Dave Silagy and sons Ryan and Mitchell creating hot sauces in their southwest Washington kitchen. Now, Silagy Sauce is a 3-year-old company selling six different sauces. The Smokin’ Habanero Sauce ($8.50), the first they created, is a fan favorite for good reason: Slowly smoking the fresh chile peppers brings out a complex flavor that lingers on your taste buds, gradually blooming and changing as you enjoy it, not unlike a bold wine would. Pick up a bottle at West Seattle’s Thriftway or Beacon Hill’s Hilltop Red Apple Market. Spice rating: 3 stars

Piri
Bonache Sauce
Every self-respecting brunch table in Seattle has at least one Bonache hot sauce in its caddy. Owned and run by Marc Olsen, this Ballard-based hot sauce company has been slinging its goods since late 2012. We’re particularly fond of the Piri ($5–$7, price varies by store), a Portuguese-style hot sauce inspired by Olsen’s frequent trips to The Spanish Table (RIP) in Pike Place Market. The spicy, citrusy, salty concoction includes just a handful of ingredients, yet its (relatively!) simple recipe delivers a deep, layered flavor. Find the sauce at most local specialty stores, such as DeLaurenti Food & Wine in the Market. Spice rating: 3.5 stars