Saying “I Do” During a Pandemic 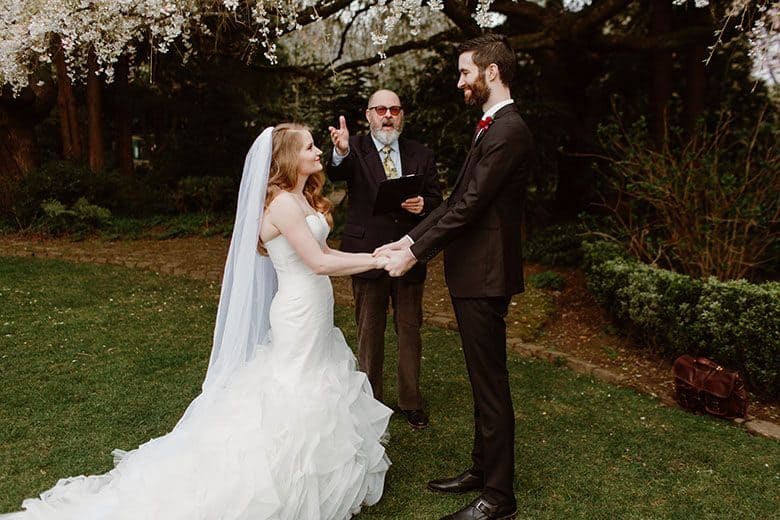 On the night of Amelia Wilson and Matt Mahan’s first date, they met up at a bar that turned out to be closed. A slightly awkward stroll led the twenty-somethings to a nearby Ballard brewery instead, and they’ve been together ever since. “We just kept on walking down the street and made it work,” Wilson says. Now, several years later, the couple is celebrating their first days of marriage in isolation. Like other local couples who refused to let a global pandemic cancel their nuptials, they found a way to make their spring wedding work.

“This all came on so suddenly when we were in the home stretch… I was pretty excited, I didn’t want to postpone that more,” Mahan says. “We wanted to have something to celebrate during these, for many people, tough times—and for everyone, very strange times. So we charged ahead.”

After extensive planning for a late March wedding, and with a guest list of 115, Wilson and Mahan were forced to reimagine their special day as Governor Jay Inslee began issuing restrictions on gatherings and events earlier in the month. But rather than cancelling their wedding outright, the couple chose to postpone their big ceremony until November and held a small celebration the day before the Stay Home, Stay Healthy order first went into effect.

The couple gathered a small group, just nine guests in total, and tied the knot at Parsons Gardens in Queen Anne on March 24. Thanks to a series of compromises—makeup artist Kat Green helped Wilson put on makeup through text message instructions, Reverend Ray Van Winkle went for elbow-bumps instead of handshakes, and the couple opted for a reception of pizza and beer—Wilson and Mahan were able to start their married life together at a time in history best defined by words like “distance” and “isolation.” Plus, with a second wedding celebration coming down the line, “I get to wear my dress again, which is pretty fantastic,” Wilson adds.

Elizabeth Kopylova, co-founder of EZ Elopements, a local small wedding service, says her business has seen an influx of elopement requests since the coronavirus outbreak started forcing couples to compromise on the size and scope of their weddings in early March. Even couples planning weddings scheduled much later this year have started reaching out about coordinating elopements instead, she says, and some are concerned for the financial burden a big wedding would put on family members and guests who’ve lost their jobs.

“It was so disappointing to have to cancel our ceremony, but we refused to let it get us down or postpone our plans of beginning this next chapter together,” says Sarah Carl. She and her husband, Trenton Wilke, made the difficult decision to postpone their 60-guest ceremony on Capitol Hill, originally set for March 22. After more than a year of engagement, the couple decided to elope rather than putting off their vows indefinitely. They contacted EZ Elopements and were married less than 48 hours later in Seward Park—on Pi Day, March 14. “We are definitely science nerds, so it makes a neat anniversary,” Wilke adds.

While Rev. Van Winkle has since stopped officiating marriages in response to restrictions on social gatherings, and with concern for the health of himself and his wife, determined couples can still—with some careful creativity—officiate their marriage, and file for marriage licenses by mail. Kopylova says they’re encouraging couples to wait until after May 4 to tie the knot while offering solutions for those who are unable to postpone due to legal or military reasons.

While the future of event venues, caterers and the rest of the wedding planning ecosystem remains in flux, along with so many of the industries that shape the big and small moments of our lives, the determined spirit shared by these couples offers a nugget of hope for anyone seeking a boost in these trying times.

Gabriella Bontrager and Connor Hedge, LA residents with Seattle ties who’d planned on a 180-guest ceremony in Green Lake on March 20, recruited help from local friends and family to broadcast a small ceremony from a friend’s house in Everett after a brief service at Kerry Park.

Thanks to a couple of tech-savvy groomsmen, Bontrager and Hedge were able to share their ceremony live on YouTube with a private link for their guests. “My parents are both deaf and many of our guests are deaf as well, so we were able to have my sister interpret on the live video. My little flower girl and ring bearer were on FaceTime and my sister walked them down the aisle,” Bontrager says. Challenges aside, “when we think about that [day], it’s also about remembering the meaningful parts that we still get to carry for the rest of our lives,” Bontrager adds. “We’re really hopeful that we’ll look back on this and laugh one day.”