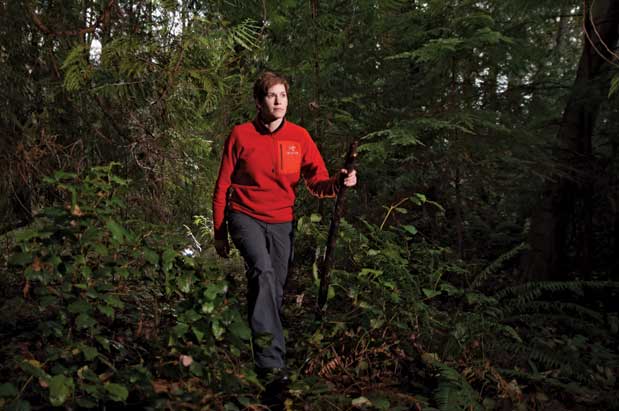 Nevertheless, the 42-year-old research field biologist, who attended the University of Washington’s School of Aquatic and Fishery Sciences and has done extensive conservation research in remote Northwest forests, tries to keep an open mind as she and three Bigfoot seekers investigate reported sightings. Why does she bother offering logical explanations (an owl, an elk, a hoax) in the face of such diehard believers? Holland says she first agreed to be on the show in homage to her father, a daredevil and lover of Bigfoot lore. But after a fan of the show thanked her for being a role model for his daughters, she realized she could make a lasting impact. “I can set an example for critical, objective thinking,” she explains. “My message to kids is to be self-confident enough to ask questions, but also to exercise compassion and listen to opposing viewpoints,” she says. She also hopes the show will encourage youth to put down the Xbox and head out into the woods—whether to prove or disprove Bigfoot’s existence. So if not Sasquatch, what does Holland fear when she’s deep in the dark forest? A fan of The Walking Dead, she jokes, “the zombie apocalypse.”

1/ According to the Bigfoot Field Researchers Organization, Washington has more Squatch reports than any other state. (County with the most sightings: Pierce.)

2/ Finding Bigfoot is one of Animal Planet’s top three performing shows ever, with a viewership of about 1.3 million.

3/ Holland believes all but about 0.087 percent of alleged Sasquatch sightings have a logical explanation (see diagram, below). When arts & culture editor Brangien Davis asked Ranae Holland, star of Finding Bigfoot, how she classifies Sasquatch sightings, the Seattle-based scientist grabbed our intrepid reporter’s notebook and quickly sketched a pie chart. She attributes the largest percentage to misidentification (as in, that weird sound was actually a moose). A significant number are due to pareidolia, the psychological phenomenon when people truly believe they see something where it isn’t (the Virgin Mary on burnt toast). The rest are due to hoaxes, lies or the influence of drugs, but there is the tiniest sliver, 0.087 percent, that Holland cannot explain. And that keeps things interesting.

The Great Northwest Mystery Anthony Bourdain Forgot to Ask Me About

There was a lot of Seattle love on The Tonight Show last night.

The celebrity chef and host of CNN's Parts Unknown recently filmed an episode in Seattle.