The people behind Seattle's coffee culture 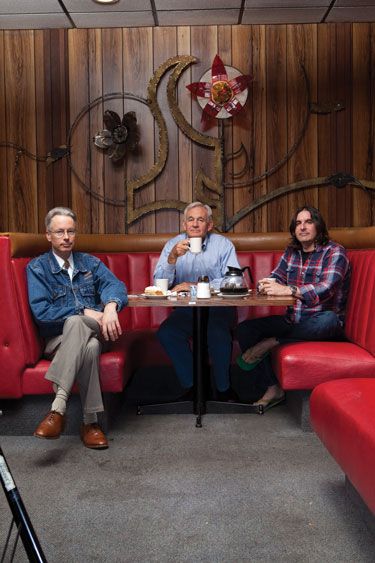 The game changer
Howard Schultz, CEO, Starbucks
After he fell in love with the café culture in Italy in the early ’80s, Schultz introduced Seattle (and the U.S.) to lattes and popularized the concept of the “third place”—a caffeine-centered community gathering spot. With shops seemingly in every mall, on every airport concourse and at every urban intersection around the country, Starbucks almost singlehandedly upgraded what Americans looked for in a cup of coffee. In 2008, Schultz returned as CEO with a vision to reinvigorate the company by crafting an even more personal connection to the coffee experience, with greener sourcing of beans and better-than-ever employee relations. This later chapter of Schultz’s career is still being written, but he never fails to intrigue, whether launching an instant coffee brand or reaching for the high end of the coffee market.

The perfectionist
David Schomer, cofounder, Espresso Vivace
When former Boeing engineer Schomer made the move from airplanes to coffee and opened Vivace (first as a small espresso cart on Capitol Hill) in 1988, he held tight to his precise, mathematical approach to pursuing espresso that tastes as good as the smell of freshly ground beans. His espresso may be unforgettable on its own, but it’s hard to resist his artistry with milk, too, which forms the signature rosetta in a Vivace latte.

The godfather
Jim Stewart, founder, Seattle’s Best Coffee
Stewart is one of the pioneers of Seattle coffee. His original roastery-café, known as the Wet Whisker, morphed into Stewart Brothers Coffee and, eventually, Seattle’s Best Coffee. At the forefront of our local coffee-roasting scene, Stewart has a passion for exploring how the soil and environment—terroir—affects the taste of coffee beans. For example: “In Guatemala,” he waxes, “you have the volcano eruptions, and all that ash—there’s a distinctive bite you get in your nose from Guatemalan coffees.” Known for his methodical approach, passion and philanthropic efforts, Stewart developed an interest in the lighter, northern European style of roasting in the early days at the Coffee Bean in Los Angeles, and since then has both inspired and instructed many roasters in the industry.

The impresario
Mike McConnell, founder, Caffé Vita
Atmosphere is a critical aspect of coffee culture, and McConnell knows how to market Capitol Hill cool in his retail shops, his Via Tribunali restaurants and even in the wholesale coffee he sells to countless local restaurants (served in Vita’s signature espresso-brown cups). McConnell made the switch from coffee equipment manufacturing to roasting in 1995 and has since been an indelible presence in the Seattle coffeescape: as an early promoter of direct-trade coffee relationships, a sponsor of semi-underground arts and music events, and as a headline maker himself.

The infiltrator
Duane Sorenson founder, Stumptown Coffee
After years as a barista and then apprenticing with local roaster Ed Leebrick (of Lighthouse), Sorenson moved to Portland in 1999 to begin his own company, Stumptown. In 2007 he brought his coffee back to the most famous coffee city in the country, opening two retail shops, and—gasp!—a roastery, too. Widely regarded for his thoughtful, vinicultural approach to coffee—deliberately roasting to bring out the delicate subtleties of different bean varietals, sourcing beans from a single farm (and paying farmers more than top dollar for the best of the batch), and an artisanal foodie focus (each bag of beans details the farm name, elevation, location, varietal and tasting notes)—Sorenson  brings to coffee the same kind of provenance food lovers have come to demand from other edibles.

The academic
Sebastian Simsch, owner/roaster, Seattle Coffee Works
Obsessively dedicated to the science, education and art of brewing, this former Amazon employee is serious about getting the best out of every coffee bean. Simsch encourages customers to downshift their espresso habits and spend a little time sampling coffee brewed from the various apparatuses in the “slow bar” of his shop at First and Pike. The bar looks like an old-school laboratory, with pour-over brewers, French presses, vacuum pots and other mad-scientist contraptions he employs to reveal what a difference brewing methods can make.

The career barista
Brian Fairbrother, Espresso Vivace
This 49-year-old, ponytailed master barista, now the general manager and a member of Vivace’s unoffical board of directors, works at the Alley 24 Vivace in South Lake Union. Fairbrother has been with Vivace for more than 20 years, since he managed the Sidewalk Bar on Capitol Hill. “Being a barista is like being a performance artist,” he says. “It’s like a stage; you entertain.” When it comes to coffee, though, he’s a perfectionist, not a ham. An aspect of the job that he still enjoys, and that requires “the meticulous attention of a scientist,” he says, is getting that perfect shot “with the perfect coloration, clarity and texture—the ‘crema.’”

The corporate concscience
Peter Torrebiarte director of coffee sustainability and general manager, Starbucks Coffee Agronomy Company
Any number of local independent coffee roasters are sourcing beans responsibly, but Starbucks has made a highly influential impact by spreading coffee consciousness to the masses. It is the largest buyer of fair trade coffee in the world, thanks in part to Torrebiarte, a 14-year Starbucks veteran, who, along with Howard Schultz and Starbucks’ global responsibility team, is pushing to do the right thing. Torrebiarte, a Guatemalan native who grew up in a coffee-growing family, helped author Starbucks’ C.A.F.E. (Coffee and Farmer Equity) Practices—the company’s ethical standards regarding quality, environmental practices and social responsibility in working with coffee growers. He was the first to set up support centers in all the major coffee-growing regions and helps local farmers learn how to grow better coffee, solve agricultural problems, use fair labor and sustainable practices—all at no cost, regardless of whether Starbucks buys their coffee or not. Torrebiarte’s mission is to show farmers that sustainability and quality equals profitability.

3. Zander NosleR: Inventor of the Clover

Seattle is no longer alone as a serious coffee city, but it still reigns as the source, locally and globally, when it comes to high-tech brewing equipment. Our collection of local engineers and visionaries have tinkered and toyed to develop machines for brewing perfection. Kent Bakke, now CEO of La Marzocco brewing equipment company, was the first in the ’70s to import the fancy European-style commercial espresso machines to coffee shops in Seattle (and, for a while, to every Starbucks). There are now tens of thousands of La Marzocco machines in use around the world. In 2003, former La Marzocco employee Mark Barnett founded Synesso and created the Cyncra, a machine with precise pressure and temperature accuracy to ensure that water for brewing is always consistent. About 1,000 Cyncra machiness are in use globally. Next to make a splash, in 2007, was Stanford grad Zander Nosler of the Coffee Equipment Company. He invented and designed the $11,000 Clover—a machine that brews a single cup of coffee at a time using a method similar to a French press, but with the ability to customize water volume and temperature for various roasts. Starbucks acquired the company and the exclusive use of the coveted machines (save for the lucky shops that nabbed one before the acquisition) in 2008. More than 200 Clovers are in distribution. The following year, former La Marzocco engineers Eric Perkunder and Dan Urwiler debuted their $18,000 Art Deco-inspired Slayer. This shiny, sexy new machine allows baristas to further customize the pressure as they pull a shot, which gives more control over quality and flavor. About 50 Slayers exist in the United States and Australia; in the Seattle area, Zoka, Equal Exchange and Vovito Caffè & Gelato use them.