The Seattle That Could Have Been: Now At MOHAI

How would Seattle look if we'd built a monorail in 1911? Pondering Seattle's alternative histories. 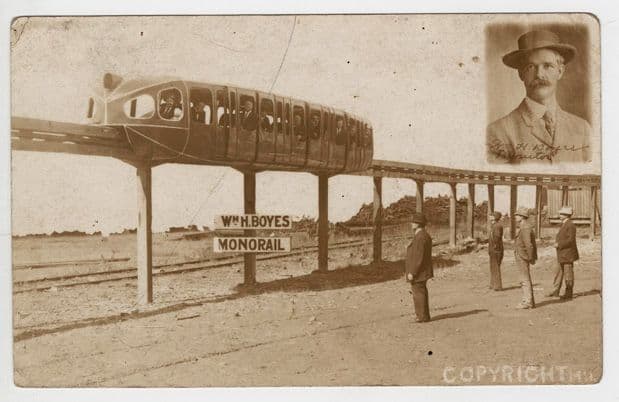 The new Museum of History & Industry (MOHAI) has taken the “musty” out of museum. Located in the restored Naval Reserve Armory, it features interactive touch screens, views of Lake Union and a vaulted main atrium. The museum’s “new” home is active and engaging. Its curators have cherry-picked their collection to display a selection of artifacts that keep the place from feeling cluttered and dark, like the old MOHAI. This museum welcomes light and space.

The new MOHAI has lots of photographs and videos. It’s designed to be interactive. It even has portable “exploration packs” for toddlers—as part of its MiniMOHAI program. The museum is not unlike “The World of Tomorrow” exhibit at the Seattle World’s Fair, but it’s aimed at the past, not the future. Though, as we know, the past is always prologue.

The museum’s exhibits not only ask us to imagine the way we were, but invite us to think about the city that might have been. One display is called “What If Seattle Had Built These Projects?” and features images of various aborted schemes for the city. You see alternative skyscrapers, parks, transportation systems and stadiums that never happened.

For example, there’s a massive building designed to replace Pike Place Market. It extends from First Avenue to the waterfront, and cars travel underneath a wing of the building. Most of us have heard of the proposed redevelopment of the Market in the 1960s that sparked the crusade to save it, but this concept dates from 40 years before, in 1926.

There’s the proposed William H. Boyes monorail system in the Duwamish Valley from 1911, five decades before the Century 21 Exposition. There’s the tunnel they started to dig through Beacon Hill in 1903, almost a century before we actually dug one for Sound Transit.

For every building, stadium, bridge, civic center and massive development we built, there were hundreds of others that never got off the doodle pad.

There’s the never-built 1995–96 Seattle Commons project, which would have been the public centerpiece of the neighborhood that is now MOHAI’s home. There’s the Bogue Plan of 1912, which would have given us a civic center in Belltown worthy of Old Europe, decades before we built Seattle Center. And there’s a sketch of a proposed floating stadium in Elliott Bay dating from 1963. If that had been built, we might have had seasick Seahawks.

I love the fact that the new museum saves a corner for alternative history, which, let’s face it, is much of what Seattle’s history is. There are a nearly infinite number of paths not taken. For every building, stadium, bridge, civic center and massive development we built, there were hundreds of others that never got off the doodle pad.

A city is also dynamic, not static. History is an ever-changing story. Looking at the what-ifs allows us to use our imaginations and ask questions: Could we have built a better city? What if we hadn’t regraded the hills or filled in the wetlands? What if we had approved mass transit in the 1970 Forward Thrust measure? More than $400 million in local bonds would have bought us a $1.3 billion game-changing regional transit system, mostly financed by the federal government. Forty years later, we’re still in the early phases of building light rail, and it cost $2.6 billion just to get from downtown to Sea-Tac.

The what-ifs also remind us that Seattle could have been worse than it is. An airport was once proposed for Madison Park and was fortunately defeated at the polls. The R.H. Thomson Expressway would have blasted through many wonderful neighborhoods with a devastating lahar of concrete. Voters approved it, but then had second thoughts. Pike Place Market really did come close to being bulldozed, until the voters again said no.

Fortunately, the new MOHAI is a place that welcomes not just those interested in the past, but in the alternative universes of a city undergoing a constant reimagining by each of us. Somehow, that is very Seattle.

Disclosure: Knute Berger was appointed MOHAI’s Denny Lecturer in 2012 and did some consulting on the new museum several years ago. Write Knute Berger at [email protected]. His Mossback column is at crosscut.com.