Sitting on the living room floor of his modest Capitol Hill home, a cup of tea in hand and a large cat lounging nearby, Garrett Fisher hardly seems poised to upend opera as we know it. But he might just do so. The acclaimed composer has earned accolades nationwide for his fresh approach, blending ancient and contemporary elements in his intriguing musical productions. “I want to invigorate the opera form,” Fisher says, “by allowing it to evolve and develop in new directions.”

What does this mean, beyond an absence of Viking helmets? Fisher’s operas—which he produces with his nonprofit collaborative, The Fisher Ensemble—are comparatively minimalist affairs, influenced by spare, ritualized performance styles, such as Japanese Noh theater and Greek drama. Dance is integral, choreographed by his sister, Christy Fisher. “The old forms have an openness,” Fisher says, “that invites the audience to fill in the blanks.” Similarly, his scores incorporate improvisational elements, which encourage musicians and singers to make the roles their own.

Rather than arias meant to be belted out, Fisher writes ethereal, haunting compositions that, thanks to his love of Indian music, are often based on Eastern tuning systems. His work sometimes sounds medieval (2000’s The Passion of Saint Thomas More), sometimes Japanese (2011’s Kocho, his 10th full-length production), and in compositions like 2008’s Psyche, it sounds like a blend of all sorts of styles—the ambient world music of Dead Can Dance, the avant-garde experiments of Laurie Anderson, the chants of a Greek chorus, Japanese taiko drumming and devotional Sufi songs.

Fisher, 41, attributes his eclectic musical tastes in part to his time spent living all over the globe as the child of professor parents. At Oberlin College, he studied composition and piano, including experimental forms—“think burning pianos,” he says. His own style is much less flammable: He composes on his living room floor using a traditional Indian harmonium, a carved wooden box with a bellows and keyboard.

While Fisher is drawn to ancient traditions, he’s equally enamored with the possibilities of new media. For example, the “web opera,” a form he pioneered in 2010 with an open, online invitation to filmmakers to create two-minute films using any segment of his composition, The Passion of Saint Sebastian as the soundtrack. Amazed by the number and quality of responses, he posted another web opera in June. This time he pre-selected filmmakers (with the help of Fisher Ensemble filmmaker Ryan K. Adams) and assigned them specific sections of his composition Psyche. The result was a start-to-finish web opera in 17 episodes.

“I’m always trying to figure out how to reach new audiences,” Fisher says, so he’s thrilled that the film format gives his operas a second, connected but distinct life. He hopes to do web operas for all of his recorded pieces, but online isn’t the only place he’s experimenting with film.

His current project is full-length feature film based on Magda Goebbels, wife of Hitler devotee Joseph Goebbels, who at the end of WWII killed her six children before committing suicide with her husband. “She was a modern-day Medea,” Fisher comments. “I can’t believe this hasn’t been made into an opera before.” Fisher’s take, naturally, will be unique—involving a cabaret, a play-within-a-play and a drag queen playing Magda. But while it’s tempting to focus on the script and visuals, he emphasizes, “The music will come first.” 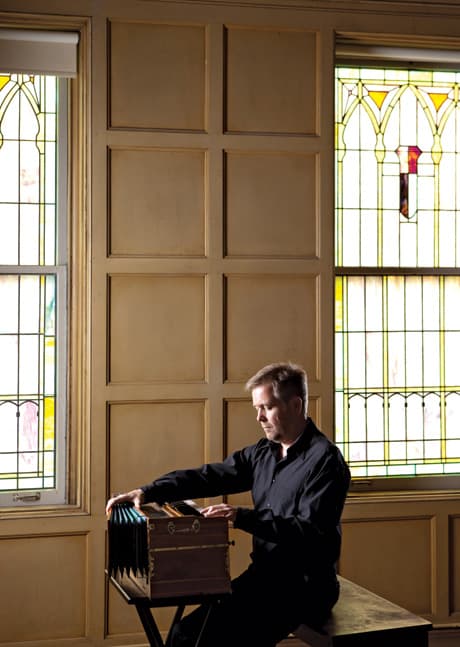