This article originally appeared in the April 2011 issue of Seattle Magazine.

When still operational, the U.S. Immigrant Station and Assay Office (commonly called the INS building) was recognizable both for its commanding neoclassical presence on Airport Way South and for the long lines of people that waited (and waited) out front, rain or shine, hoping to become American citizens. Opened in 1932 and now on the National Register of Historic Places, the five-story, 77,000-square-foot structure closed in 2004, after the Immigration and Naturalization Service had become the Bureau of Citizenship and Immigration Services under the Department of Homeland Security (in 2003) and a new facility opened in Tacoma. The historic building stood empty for nearly six years, until a recent series of events imparted new life as the soon-to-be largest artist enclave in Seattle.

Rolf Hogger is founder and CEO of MRJ Constructors, a general contracting firm that completed the historic renovation of the Melrose Market on Capitol Hill. Commuting from Bainbridge Island, Hogger walked by the INS building every day for 10 years. “I admired it so much,” he recalls. “You just don’t see architecture like that anymore.” And then, one day, he saw a sign announcing the building was going up for auction. With a group of 11 other investors (as INS Holdings LLC), Hogger purchased the building in 2008 for $4.4 million.

“Originally, the concept was offices,” Hogger says, but since the building was labeled historic, he knew a massive renovation wouldn’t be possible. “We knew it was always going to be a funky space, so we were looking for creative tenants.” But while the vision was for a mix of artist tenants and creative companies, when the local real estate market tanked over the next year, businesses in search of space were able to find reasonably priced, less-funky offices downtown. “We couldn’t compete,” says Hogger. 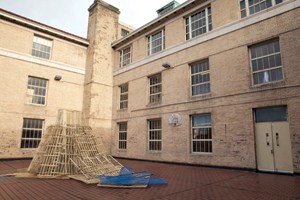 Enter Sam Farrazaino. A sculptor also skilled in construction, Farrazaino has a long history of developing artist enclaves in Seattle—including the 619 Western Building in Pioneer Square (which at press time was hanging in the balance, due its proximity to the doomed Alaskan Way Viaduct), where he began parceling out spaces in 1995 and now rents two floors to 10 tenants. “I came in [to the INS project] to give ideas on how to attract artists and build good artist spaces,” Farrazaino explains. Noting that the original idea was to have artists on the first floor and offices on the remainder, he says, “It became clear to me the whole building should be filled with artists.”

All too familiar with the visible earthquake damage sustained by the 619 building, Farrazaino was drawn to the fortress-like construction of the INS building (“It’s really solid,” he marvels) and also the fact that the space had already been divided into offices, making it easily transformable into individual artist studios—not to mention the huge windows, high ceilings and nearness to gallery-laden Pioneer Square. “If I can develop a space at the right level,” he says, “make it workable for artists—not the Taj Mahal, but not a slum—and give artists an affordable rate, I’ll keep it full.” He’s well on his way.

After renaming the building Inscape, the owners (Farrazaino serves as property manager and has an ownership stake) held an open house last October. More than 3,000 people attended, including many artists who reportedly were rushing into the vacant offices exclaiming, “Mine!” Inscape can hold 100 to 125 tenants, depending on how the larger spaces are divided. (Farrazaino hopes some of those tenants will be artists displaced from 619 Western.) Studio rentals run from about $1 to $1.80 per square foot, depending on windows, ventilation and other factors. (Currently, the spaces are designated for work, not dwelling.) At press time, 50 tenants had taken occupancy and 16 more were poised to move in soon.

The building’s first occupant was a pioneer of sorts. Sculptor Julia Haack, who uses her 550-square-foot studio to craft artwork from salvaged wood, arrived in December 2009. “The building is aesthetically beautiful to me,” she says. “It’s an easy bike ride from where I live, it’s close to downtown, and the owners were promising that they would bring more artists in.” Haack says she loved having the building all to herself during the first several months, but she’s also looking forward to new neighbors. “I’m hoping that as more artists move in, and with some organization, we can learn about each other and plan events that will be beneficial to ourselves and to the arts community.” 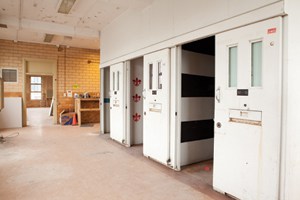 Alicia Tormey, an encaustic painter, moved into her approximately 600-square-foot studio last October and says the building’s vibe changes every day. “The more artists who come, the more fun it is to be here,” she says. Having worked in isolation at home for the past 10 years, Tormey is thrilled by the concentration of creative types in what she calls an “art warren.” She loves bringing the public into her studio for classes—one recent student had years before received her green card just down the hall. When Tormey first encountered her space, she recalls, “It had a bureaucratic feel—awful gray carpet, dingy walls,” but after Farrazaino exposed the floors and painted it, Tormey compares it to “an artist’s loft in Paris.”

Despite what to artists seems like a remarkable transformation, Farrazaino says, “We’re doing a light touch with redevelopment.” The emphasis is on preserving the building’s history—not all of which is rosy. In addition to being the place where countless immigrants experienced the thrill of becoming American citizens, it also is a place of deep sadness for some families—the last stop before deportation. Farrazaino and the ownership group have no intention of ignoring what he terms the building’s “bipolar” history, and are working with the Wing Luke Asian Museum and other International District community groups on ways to respect the place’s darker past.

Signs of that legacy remain—in some cases literally. Labels designating detainee dormitories as “Chinese” (the Chinese Exclusion Act of 1882 severely limited such laborers from immigrating) or “white” (everybody else) still hang outside doors. Hands painted on a basement wall indicate where and how to stand while being frisked. Solitary confinement cells raise haunting questions about who was put inside, and why. The walls of the detainee recreation yard, a south-facing tiled plaza, are covered in graffiti—scrawled with tar found melting in the heat.

Farrazaino hopes to turn the recreation yard into a gardening space, where vegetables could be grown and donated to food banks in the International District. (“A reparation of sorts,” he says.) The large detainee dormitories would make excellent rehearsal spaces for dance companies. The swearing-in room? A black-box theater. At the front of the building, where the huddled masses awaited their chance at the American dream, plans call for a sculpture garden. Already the halls are filling with painters, guitar makers, photographers, choreographers, digital media makers, ceramists, actors, filmmakers, art therapists and others, all working to green card the old building’s new identity.