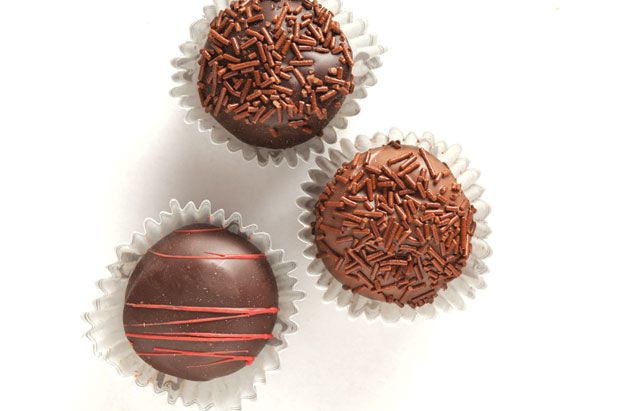 Dilettante
Let’s zoom out on this a bit: There’s a restaurant in Seattle’s Capitol Hill ’hood that makes almost a dozen versions of chocolate martinis ($10.50) any night of the week, and it’s busy—all the time. We haven’t flipped back to 1990; Dilettante Mocha Café is genuinely popular. Which means that no matter how much we judge you for drinking a chocolate Manhattan, we respect that the Dilettante family has had candy in its veins in Seattle for more than a century, and that its hot chocolates—all gazillion of them—are delicious. And those mochas at each of its “mocha cafés”? They allow you to be picky about your perfect mocha. Stop by the Dilettante stand at the airport for our favorite, the Ephemère Dark ($3.45). Made with dark chocolate, butter, cream and vanilla, it’s rich without being too sweet. In fact, we’d call Dilettante Sea-Tac’s biggest asset. Bonus: You can take a box of its signature truffle crèmes ($11 for 10 ounces) or meltaways ($8 for box of eight) to your relatives in Ohio. Dilettante Mocha Café & Chocolate Martini Bar, 538 Broadway E, 206.329.6463; Dilettante Mocha Cafés, multiple locations; dilettante.com Chukar Cherries
Since 1988, Prosser-based Chukar Cherries has been devoted to everything you could do to a dried cherry—including covering it in chocolate. Launched by former real estate agent Pam Montgomery and her husband, J.T., Chukar has redefined chocolate-covered cherries and their role as a classic gift for this time of year (thank goodness). Try the dark chocolate Cabernet cherries—the fruit inside is bracingly tart. $9.75 for 7.5 ounces. Prices vary. Available at area grocers and the Pike Place Market store, 1529-B Pike Place; 206.623.8043; chukarcherries.com Almond Roca
You know it’s a classic, but perhaps you didn’t realize that Almond Roca, in its famous pink tin, is made in Tacoma. Candy company Brown & Haley has been churning out its chocolate-almond butter-crunch treat since 1923. Just in time for its 100th anniversary, the company released a dark chocolate version, called Dark Roca—same great tin, more chocolate flavor. $5.99 for 9-ounce tin. Available at grocers nationwide; brown-haley.com Seattle Chocolates
You know Seattle Chocolates for the confections it produces under the Frango label and for its own label’s smooth, crinkle-wrapped, bite-size truffles ($21.95 for 1-pound bag). Some flavors—like its line of “cocktail” truffles, including Appletini and Cosmopolitan varieties—may be tuned to more, shall we say, pedestrian palates. But last year, Seattle Chocolates announced a new, more grown-up line of “couture” chocolate bars, released last summer under the Jcoco name (the first letter of the owner’s name, combined with how cacao sounds). Most of the bars, such as the crunchy black fig pistachio, are made with 72 percent dark cacao Belgian chocolate. Our unexpected favorite? The sharp citrus notes and velvety texture of the Veracruz orange, a white chocolate bar, made us swoon; if you have to eat white chocolate, this is the way to do it. And, every time you unwrap one, a “healthy serving” of food goes to Hopelink, a Seattle nonprofit that serves meals to low-income families. $7.95 per bar. Available at local grocers; seattlechocolates.com