An Icelandic sculptor brings her posse to Westlake Park. 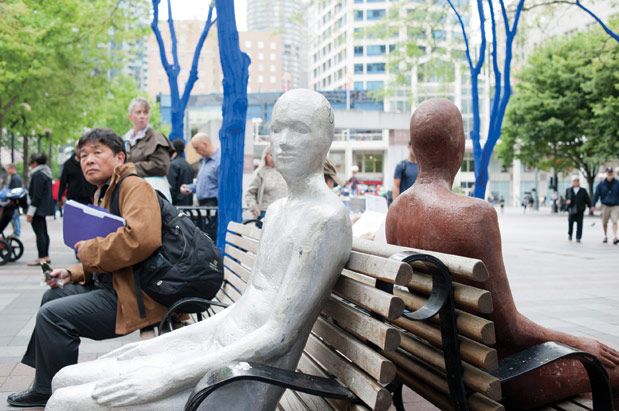 There’s a new gang hanging out in Westlake Park this summer and its members seem a bit steely. But that’s only appropriate—they’re made of aluminum and cast iron. The gathering of humanoid sculptures, called “Borders,” was installed in June by Icelandic artist Steinunn Thórarinsdóttir. The 26 androgynous, life-sized figures are cast in ordinary poses and stationed around the park: sitting on benches, traversing the plaza (which since April has been enlivened by Konstantin Dimopoulos’ ultramarine trees), stopping to “think” or to look at something.

The minimalist alien forms mimic our own actions—they even age as we do, the iron rusts and the aluminum dulls—but at the same time, they exist at a calm remove: Here they are, descended into our midst, eerily like us, yet at arm’s distance; their eyes are closed and they have no ears. In this sense, they come ready-made with built-in borders, which Thórarinsdóttir says viewers are encouraged to cross. And people do, by sitting next to and on them, adorning them with hats (a la Fremont’s “Waiting for the Interurban”) and snapping photos with them. The sculptures may not react, but they do give something back.