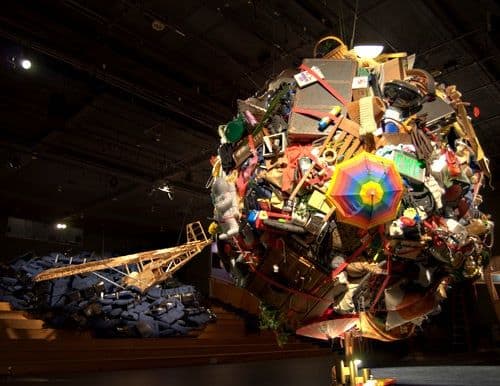 A wise man once said, “You can find anything on Craigslist.” Seattle installation artists SuttonBeresCuller took that man at his word for “To Be Determined,” their current show at On the Boards.

The artists used Craigslist to source all the materials for the event, from the sculptural installations–which include an impressively huge globe made of yard-sale-style junk and an equally eye-catching model plane–to the performances.

SBC hired a bunch of these folks (I don’t know if they were paid in dollars or “exposure”) to perform as they would normally, but instead of at a bar mitzvah or birthday party, it was on the esteemed stage of On the Boards.

If you had the venue and the means, you could do it too. Just now I did a Craiglist services search and found a tuba player, a cartoonist, a tattoo artist, a belly dancer and a guy who will laminate just about anything. That sounds like a pretty fun party too.

It would also likely be a little weird, as was the SBC event. The parts that most of us couldn’t do–craft a compellingly giant ball made of consumer detritus, and build large-scale wooden structures, such as the wooden plane (which was crashed into a pile of theater seats) and a slatted mobile trailer (harder to describe, but very cool)–were visually clever and appealing in their out-of-place way. But it was harder to know how to respond to the other out-of-place things–the performers.

There was a lot of discussion about what SBC’s intention was in featuring the Craigslist performers (who ranged from okay to pretty good). Was SBC making fun of them?

It didn’t seem like it. It seemed like we were supposed to take them at face value. So then, were they making fun of On the Boards for its sometimes bizarro programming? I don’t think so. So what were they doing, exactly? Maybe just loosening up the venue–kicking off the new season with a little fun. The audience did seem to be having fun–we didn’t have to sit in our seats (they were all in the pile anyway) or be quiet, or watch carefully, or really pay attention to anything in particular. Drinks were served and milling about was in full force.

So while at first I approached the evening like Bumbershoot (as a press person I was given a schedule of performances), trying to make sure I was in the right spot at the right time to see the right thing, I eventually gave up and sat on the floor and let the event wash over me.

I highly recommend this approach. After watching several disparate performances and, during the lulls in between, chatting with the usual suspects from the Seattle art scene, my husband Daniel commented (from underneath the crashed plane), “It feels like different worlds opening onto each other.”

Runs through September 18 at On the Boards