The chef behind Vancouver’s hottest restaurant is poised to open its only US location in Seattle.

By Neal Mclennan and Amanda Ross 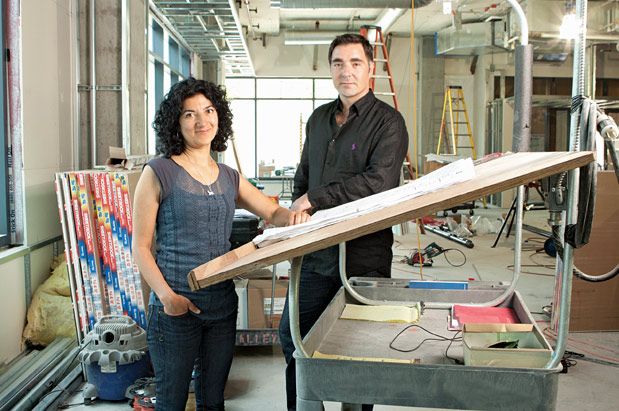 This article originally appeared in the November 2012 issue of Seattle Magazine.

The ritual is the same, 365 days a year. Rain or shine, at 4:45 p.m., the faithful, the curious, the famous and even the jaded make their way to a sleepy side street in Vancouver’s tony South Granville neighborhood, hoping to secure a seat at a culinary icon. The doors won’t open until 5:30, but no matter: Mecca is worth the wait.

There are no pilgrimages to the city’s best Italian restaurant, or even its French—even Daniel Boulud couldn’t retain foodies’ interest and shuttered his eponymous establishment a few years back. But acolytes—from locals to visiting celebrities such as Harrison Ford and Robert Pattinson—all line up for what’s still considered the Holy Grail of Indian restaurants almost 20 years after its opening: Vij’s. Yet this establishment’s siren song doesn’t stop at the city’s edge: No shortage of Seattleites endure the three-hour drive and several-hour wait to eat what The New York Times’ Mark Bittman calls “easily among the finest Indian restaurants in the world.” The lauded lamb popsicles—frenched lamb chops served in a fenugreek curry—are the closest thing Vancouver has to an official dish. Thankfully, for Seattleites, the commute is about to get a whole lot shorter.

When it was announced that a new Vij’s restaurant—christened Shanik, after the owners’ daughter—was coming to South Lake Union, it was manna from heaven to local foodsters. But no sooner had the confetti settled when a few questions popped up: Why was Vikram Vij, who’s been the face of the original restaurant since its opening in 1994, not part of the new restaurant’s ownership with his wife, Meeru Dhalwala, who is actually the celebrated chef behind Vij’s fame? Would the menu be the same?

Dhalwala concedes that Shanik came about by accident. “Seattle wasn’t on my radar at all.” At Vij’s (and the couple’s casual neighboring lunchtime eatery, Rangoli), the two had settled into a comfortable routine: Vikram worked the front of house in both establishments, while Dhalwala developed the recipes and ran the kitchens. But, says Dhalwala, “Vikram wanted to open a place in South Surrey (just north of the U.S. border), and I was—and still am—planning to open a restaurant in Istanbul.” A deal was struck: The Vij’s formula would stay the same, but each could branch out on their own side projects with 100 percent support from each other. After travelling to Seattle several times, Dhalwala heeded the call of a group of passionate fans who kept encouraging her to open here. After researching the city’s restaurant scene, Dhalwala says she thought, “My gut says this is a good go, so I’m treating it like my third and accidental pregnancy: It’s not planned but I’m going to love it!”

As for the restaurant itself, “It will have a very specific feel,” says Dhalwala. “Vij’s is the eggplant, Rangoli is the pomegranate, and Shanik is the lychee—sweet and sexy.”

For Dhalwala, the return to Seattle marks an American homecoming. Though born in India, she was raised in the Washington, D.C., area, where her family still resides. No doubt, there will be some key differences between operating a restaurant in the U.S. as opposed to Canada (minimum wage is $10.25 in British Columbia, and government regulation thrives). But Dhalwala isn’t fazed: “I’m so excited about the wine list. We’ll be able to have so many different, exciting options on the menu!” Other differences aren’t as much fun: “I refuse to open a business and not ensure that all my employees have health insurance,” despite the intricacies of paperwork that accompanies this in the U.S.

While she hasn’t signed off on the final menu, Dhalwala plans to follow the same tried-and-true recipe for success she uses at Vij’s and Rangoli. For one thing, she hires kitchen staff with no professional training—just passion and a basic understanding of Indian home cooking. “It’s a heartfelt way of cooking, not egotistical,” she explains. That her kitchen staff happens to be all female is something of a coincidence: “I’m not against hiring men,” she says. “It just worked out that everyone in the kitchen is female.”

How does a chef with a decades-old award-winning restaurant and international street cred stay motivated and creative? Each day, Dhalwala spends one hour reading about food, and continues to experiment through trial and error. “Ideas for cooking come to me from anywhere,” she says.

With Shanik’s opening imminent (at press time, set for late this month or early next), recipe testing is in full-force mode; proposed dishes are undergoing test runs at Vij’s right now. The menu will be at least 40 percent vegetarian, and some dishes that have been retired after a long service at Vij’s—such as roasted eggplant and papaya curry with black chickpeas—will appear, along with new creations such as split pea, lentil and spinach mash with mogo fries. “Our food philosophy has always been to keep our spices and cooking techniques Indian—from all regions of India—while using meats, seafood and produce that are locally available,” says Dhalwala. Each season, she riffs on the menu to keep it fresh and exciting. Meanwhile, Dhalwala has also been holding impromptu dinner gatherings at various houses in Seattle, trying out her recipes for a disparate group of locals in an effort to get to know the community. Shanik will channel a Himalayan mountain-hut vibe, with seating for 72 and private dining room for six, while a casual takeout counter will serve South Lake Union’s massive lunch crowd with healthy, organic comfort food, such as Indian poutine. Once Shanik is up and running, Dhalwala and her partner Oguz Istif (chief operating officer of Vij’s companies in Vancouver) plan to have a market component that will stock hard-to-find ingredients for the home chef, including ready-to-eat curries.

One aspect that won’t change is Dhalwala’s desire to forge relationships with local farmers to supply the restaurant. But first, she’ll make good use of a 10-pound bag of fresh, homemade Indian spices her mother carted back from India especially for her to use at Shanik, along with turmeric grown in her niece’s backyard, and hand-dried, and asafoetida (a spice often used in lentil curries and vegetable dishes) from another relative’s yard (“superstinky!”). Says Dhalwala: “I’ve decided that with motherly energy like that, I can’t go wrong.”

Coordinates: Shanik, 500 Terry Ave. N (at the northeast corner of Republican and Terry streets); Phone and website not available at press time