Capture 3-D Images on Your iPhone with Poppy 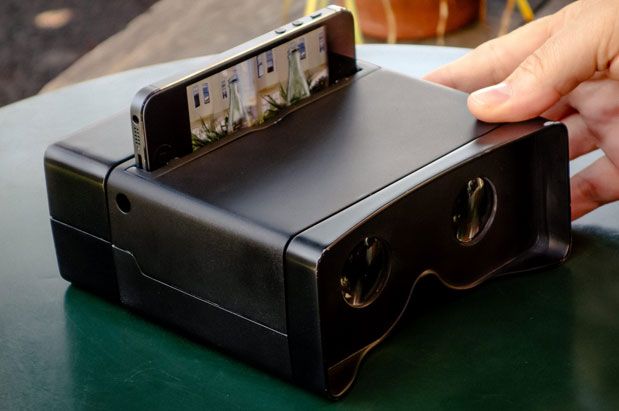 Remembering the View-Master is an exercise in nostalgia—the bright plastic case, those circular cardboard reels, that clunky lever that allowed you to click through 3-D images of the Grand Canyon! The beloved toy stereoscope gets a 21st-century upgrade with Poppy, a new device that turns your iPhone into a camera capable of capturing and viewing images in three dimensions. Created by Seattle start-up vets Ethan Lowry (cofounder of Urbanspoon) and Joe Heitzeberg (cofounder of Snapvine), Poppy—which works with iPhone 4, 4s or 5, or a fifth-generation iPod Touch—uses special optics to transform your phone’s 2-D photos and videos into eye-popping 3-D stills and movies. The initial concept was so popular that Poppy’s Kickstarter goal was met a mere nine hours after launch and has since been far exceeded. The intentionally low-tech design (no batteries or chargers needed!) resembles a pair of boxy binoculars, into which the iPhone slips horizontally, à la View-Master discs. Users can post images and video to social media sites, where anyone who wants the 3-D experience need only don a pair of the classic red and blue glasses. In a city buzzing with everything from asteroid mining to nanotechnology, this old-school innovation feels like a happy stroll down memory lane. Available for preorder (ships in January 2014). $69.99 for black, $74.99 for white. poppy3d.com