Six months after closing Souvenir, Curtis Steiner is back on Ballard Avenue with a new gift shop; pl 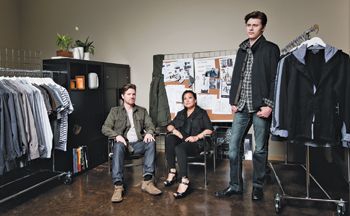 Design Duet
Craig Glover and Jean Bhang-Glover may be the local fashion personifications of the term “power couple.” At the helm of not one, but three burgeoning fashion lines (AT Collins, Applied Theory, 8telier), the married duo has returned to their Northwest roots (after a 15-year sojourn in New York City) to work on their joint menswear line, AT Collins, which is flush with tailored East-meets-relaxed–West Coast jackets and button-ups. Merchandiser Craig handles the business end, while longtime women’s wear designer Jean now lends her detailed design eye to leather appliqués on structured jackets ($98–$169), exposed pockets and unexpected grosgrain ribbon trim on AT’s expertly fitted button-up shirts ($69–$89). The new fall collection, which debuts this month, strongly echoes the couple’s new Capitol Hill base in the Packard Building with striking plaids and jet wash jackets with concave buttons. “[The new collection] is very utilitarian; distressed, yet classic,” says Jean, “like an oil-stained, chiseled James Dean.” On the horizon: The tireless pair will launch smartly chic women’s line 8telier in the fall. Available at atcollinsny.com.

Make saving money (slightly) enjoyable by feeding your change to this modern “Chalk It to Me” chalkboard piggy bank from Ballard-based Ladies & Gentlemen Design Studio. It’s made from smooth, pigmented ceramic, and you can scribble down your current saving goal in chalk (Italy fund! New purse!). Plus, with his stylish curves and cute hand-knotted leather tail, this little piggy is decidedly more approachable than an ATM when you need to borrow back a fiver. $85 at ladiesandgentlemenstudio.com. When beloved Ballard spot Souvenir closed its doors last February, owner Curtis Steiner treated the loss as one would a death, cheekily sporting a black funeral armband. (The shop closed because an elevator was being built through its previous space.) Just shy of six months later, Steiner has returned to Ballard Avenue. In May, he moved a block north and opened Curtis Steiner (5349 Ballard Ave. NW; 206.297.7116; curtissteiner.com), a handmade-gift shop in the choice corner space that used to house the Guitar Emporium. Filled with artist-made jewels and inspiring writing-paper displays, the white, modern space has been given a crisp paint job, refurbished wood floors and bold antique lighting to enhance the original stained glass windows. Though still featuring his art pieces and jewelry, Steiner is using his new, remodeled shop as an excuse to also remodel the Souvenir concept: The artist will focus on limited, hand-printed card runs, and down the line, will debut his own stationery line. Also pleasing longtime fans, Steiner now sells the ornate paper flowers ($6.50–$16) that used to only come with purchases. “It still has the same rules as Souvenir; nothing is mass produced,” he says. “But now there is more of a focus on artist-made jewelry and antiques, and the space to do it bigger and better.”