Two local fashionistas have transformed an old trailer into a roving shopping destination. 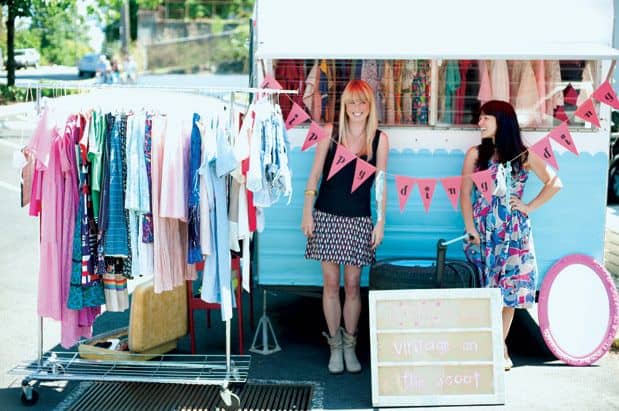 This article originally appeared in the October 2012 issue of Seattle Magazine.

We’ve grown accustomed to meals on wheels, but now Amanda Linton and Allison Norris are transporting the concept to fashion for their new mobile vintage boutique, The Kippy Ding Ding.

The duo first brainstormed up the idea after meeting last year at a coffee shop. Linton, a seasoned wardrobe stylist, had spotted similar boutiques-on-the-go in cities such as Portland and San Francisco; Whidbey Island native Norris then fortuitously found a 1965 Aristocrat trailer to house their finds. After an adventurous remodel (“We had to rip out this disgusting fridge that a few rats had died under,” laments Norris), the charming trailer—complete with a chalkboard wall filled with sunglasses and jewelry, plus racks of finds sourced from estate sales and thrift stores—hit the streets in July.

The cheerful wares, which often spill out of the truck onto sidewalk displays, include chunky leather belts, funky housewares like bubble gum pink tissue-box covers, bright yellow kitten heels and oh so many patterned day dresses. Prices hover around $25–$50, with a few designer pieces near $150.

The Kippy makes regular appearances in Fremont and Capitol Hill, but visit the blog (thekippydingding.blogspot.com) or follow @TheKippy on Twitter for details on its next stop.