Seattle magazine looks back on the last decade of this celebrated local fashion designer's career. 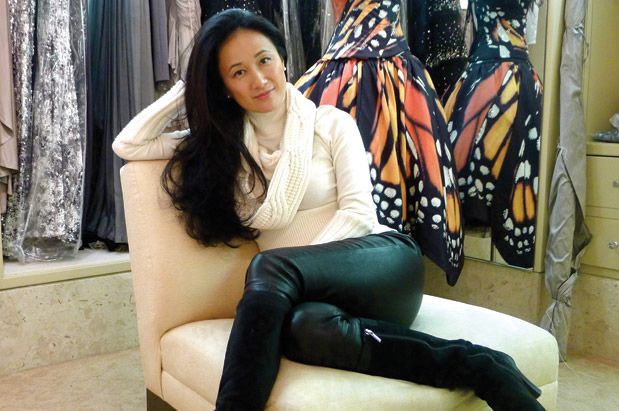 In 2000, then graphic designer Luly Yang entered a fashion show on a whim, crafting an exquisite butterfly dress entirely out of paper. The awed—and awesome—reception to the gown soon inspired a career change. Now, after enlivening the fashion community for 10 years, gaining fame for her thematic annual runway shows and elegant bridal and special occasion gowns that stand the test of time, the couture designer continues to lead the Seattle scene. “It all started with a butterfly,” Yang says, “and now, 10 years later, we’re back to our roots with an entire show focused on the journey of the butterfly, which is so similar to my own as a designer.” As the designer comes full circle with “A Monarch’s Tale” on April 27, we look back at the moments (and the gowns) that defined the decade at this local house of couture. 2001 Yang opens an intimate studio bridal boutique at Fourth Avenue and Pine Street downtown; her first bridal collection includes 12 gowns. She hosts her first fashion show in the boutique’s hallway. The Luly Yang Couture bridal line makes its first appearance in Seattle Bride magazine; over the coming decade, Yang crafts dozens of exclusive gowns for the publication. The Italian satin and organza gown with flounce sleeves (above), from the Fall/Winter 2001 issue, was inspired by a flamenco dancer’s costume.

2004 Yang moves her boutique to its trademark location in The Fairmont Olympic hotel downtown. 2005 Designed around the life of a butterfly, the “Metamorphosis” couture collection includes one of Yang’s most well-known designs, the silk taffeta “Monarch” butterfly dress (above: an update to her original 2000 design). The creation later appeared on the Teatro ZinZanni stage in 2009. 2006 A year later, Yang finds inspiration in the mystical East for the “Passage to Shanghai” collection and couture show; her ornate finale gown is also featured in the December 2006 issue of Seattle magazine (above). 2007 Yang receives the prestigous Nelli Cashman “Woman Business Owner of the Year” Award and debuts the “Dreams Take Flight” collection; above, a dupioni silk strapless gown from the collection sparkles in the Fall/Winter 2007 issue of Seattle Bride.

2008 The designer opens her second boutique, in Beijing, China, the first American couture designer to do so in that city. Yang caps off a big year with the “20/20” runway show—inspired by seeing the world in new ways. 2009 In the same year that Yang channels the works of Michelangelo for her “Creation” fashion show, Project Runway model Nazri Segaro wears the designer’s ivory silk confection for the Fall/Winter 2009 issue of Seattle Bride (above). 2010 Channeling the wonders of the sea, the “Ocean” collection’s finale gown (above) wows at the couture show at the Seattle Aquarium. 2012 On April 27, Luly Yang Couture will present the long-awaited 2012 couture show, “A Monarch’s Tale,” at Fremont Studios. A benefit for Seattle Children’s, this year’s runway show tells the tale of a butterfly’s journey around the world—from the icy tundra to wild South American rainforests.

For tickets and information on “A Monarch’s Tale” visit lulyyang.com.