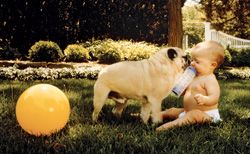 Pet Project
As if there’s not enough stress with bringing the new babe home from the hospital, you also have to worry about Fido and all the canine complications that can arise (like jealousy and aggression toward the new bundle). So before the homecoming, plan for a crash course with Wallingford’s Susan Oshie, a former veterinarian technician and owner of 8-year-old Paws4Training (paws4training.com), which is offering a new class called Introducing Your Dog to Baby. Oshie holds one-hour sessions ($30) with newbie parents, covering what to do before and after a baby joins the family. Her advice ranges from getting your pup used to baby smells and sounds beforehand (she has a recording with 100 baby noises—burping, crying, laughing, etc.) to enlisting friends’ assistance with feeding and walking your pet, since you’ll be busy nursing and rocking the wee one. In those early weeks, says Oshie, “Parents don’t have time and energy for the dog, but it’s OK to ask for help.” In the end, it does wonders for your pet’s needs. And everyone knows that a happy dog makes for an even happier family. Next classes March 10 and 24. Call 206.601.0516 for more info. 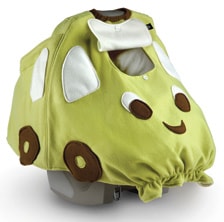 Mother of Invention
Being a Seattleite for less than a year hasn’t kept Jessica Kim from getting her company’s wares on the shelves of the city’s best kiddie boutiques. It’s no surprise, because the products from Babbaco (babbaco.com) are so darned cool. Kim’s vision is to create things that are “simple, functional and supercute.” Her ideas come from the challenges of being the mom of a 4-year-old and a 1-year-old. Case in point: the BabbaCover Snuggle Fleece ($65), a snug cover for infant car seat carriers that won’t slip off and keeps kiddos warm and dry in any weather. (Kim created it after one too many outings in her former city of residence, Chicago, where the wind would blow away the blanket she’d put over her baby’s car seat.) Window flaps make it easy to peek inside, while cargo pockets hold keys, cell phone and wipes.  A lightweight summer version features an SPF 50 lining and mosquito netting.  Also hot: the BabbaMat ($70), an inflatable, cushioned foam play mat, which Kim created after tailgating at a football game and realizing a blanket on the hard asphalt wouldn’t work. Since moving to Wallingford, she says, her own BabbaMat has had plenty of use at family picnics in Gas Works Park.

Beyond Story Time
With the glut of iPads, iPhones and other smart devices, it’s inevitable that your child will be exposed to them early on. A positive way to embrace the tech tide is through Memetales.com, a website that helps parents find and read picture books with their kids either online or through an app. Created by Maya Bisineer, a Bellevue mother of two and director of education for the Social Media Club of Seattle, the site hosts an online community that engages kids up to age 8 to read and do activities related to the books, plus contribute their own tales and illustrations. Says Bisineer, a former software developer: “Storytelling is such a natural thing, and we want parents and children to be part of the process. Even though the platform is technology, everything is done to foster creativity and give families valuable time together.”

>> From March 15 to 31, parents can check out their neighborhood schools during the Seattle Public Schools open enrollment period for 2011–12. It’s also the best time to apply to schools outside your attendance area, if you so desire, since your child would be assigned based on a tiebreaker system. Visit seattleschools.org for details.