The new show spotlights one of fashion’s most iconic designers

Released earlier this year, Andrew Rossi’s documentary film The First Monday in May tells the story of the ultimate intersection of fashion and art: the annual Met Gala at the Metropolitan Museum of Art’s Costume Institute in New York City.

This fall, Seattleites will have the chance to experience their own high fashion and fine art crossroads with the Seattle Art Museum’s (SAM) debut of Yves Saint Laurent: The Perfection of Style, the museum’s first monographic fashion exhibition, celebrating the life and work of legendary couturier Yves Saint Laurent (YSL).

Curated by Parisian fashion expert Florence Müller in collaboration with SAM’s deputy director of art, Chiyo Ishikawa, The Perfection of Style will feature more than 100 haute couture and ready-to-wear garments from the archival collection of the Fondation Pierre Bergé–Yves Saint Laurent, the organization devoted to preserving Saint Laurent’s work. It will showcase celebrated pieces from the designer’s 44-year career, including the “le smoking” tuxedo-style suit, the iconic, pop art-inspired Mondrian dress, select items from his ready-to-wear line (Saint Laurent Rive Gauche), as well as looks that have never been shown publicly.

But Saint Laurent’s designs are only part of the exhibit. “[The Perfection of Style] will deeply explore the connection between the life of YSL and his creations,” Müller says. “There will be beautiful dresses, but we will also try to explain these looks with documentation, texts, drawings and photographs to show the man and the work…but mostly the man.”

The exhibit represents a milestone in SAM’s artistic programming, and is also part of the perennial “art versus fashion” debate. 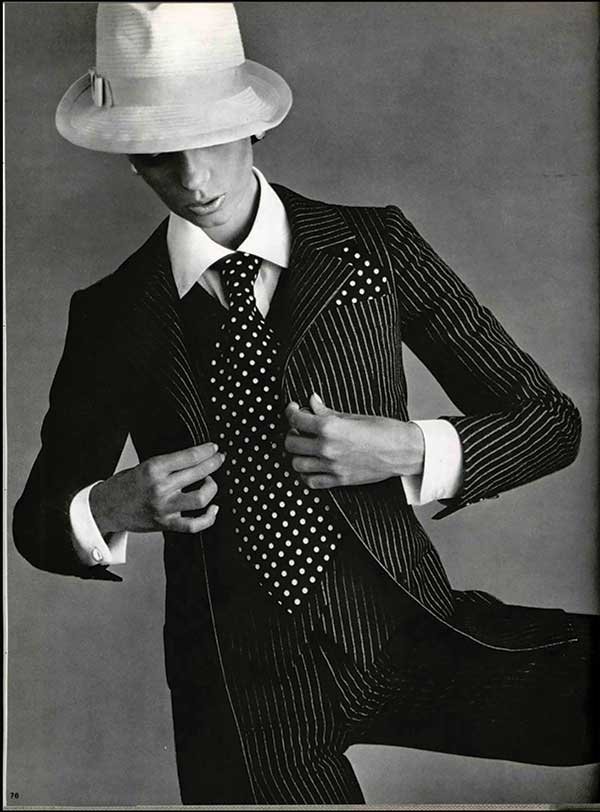 A pinstripe suit from the designer’s spring 1967 collection illustrating his revolutionary concept of menswear-inspired looks for women; photo by Patrick Bertrand/Les Editions Jalou

“Seattle is a city that is going through a lot of changes right now, and I think we are much more design conscious than people realize,” says Ishikawa. “I think there is a great readiness for this.” Part of that readiness could be attributed to an increased intermingling of the realms of fine art and fashion at the national level, a departure from the classic separation of the fine arts and decorative arts, with museums curating style exhibitions that yield rave reviews from both communities. In 2011, Savage Beauty, the retrospective exhibition celebrating the work of late designer Alexander McQueen, debuted at the Met and continues to be one of the most well-attended shows in the museum’s history. Earlier this year, Oscar de la Renta: The Retrospective saw record-breaking member preview sales in anticipation of its spring opening at the de Young Museum in San Francisco. “There is a greater synergy or a more obvious relationship between fashion and art now more than ever,” Ishikawa says. “And Yves Saint Laurent is someone who you don’t even question [the connection], because his is so clearly the story of an artistic, creative genius.”

Born in Algeria in the mid-1930s, Saint Laurent was introduced to Christian Dior at age 19 and was named successor of the house just two years later, after Dior’s death. In 1960, Saint Laurent launched his own couture house, becoming one of the foremost innovators in women’s fashion of the 20th century. While gender fluidity is an increasingly prevalent part of today’s culture, Saint Laurent began exploring parity of the sexes 50 years ago with his revolutionary designs, interjecting menswear into women’s clothing by popularizing pant suits, including pockets in eveningwear and cutting garments designed to adapt to the evolving female life.

“Life changed for women after the Second World War,” Müller says. “They were enjoying a life that was far more active. A whole new attitude, really. For Saint Laurent, it was so important that his designs reflected a connection to that reality. It was ok to create haute couture for beautiful fashion shows, but he saw this as only half of his job. With the launch of his ready-to-wear line in 1966 [Rive Gauche], he wanted to create something inventive but that would be used in everyday life.”

The designer also was inspired by trends in the visual arts, film and music. “He and [business and life partner] Pierre Bergé collected a lot of classic European masters, sculpture and furniture,” says Ishikawa, “but they were friends with Andy Warhol as well, so you also see these pop art influences later in YSL’s work.” These garments will be on display with works from SAM’s collection of Warhol, Tom Wesselmann and Roy Lichtenstein to give context to this time period in the designer’s history. Whether Seattleites identify as fashionistas or art connoisseurs, The Perfection of Style promises transcendent appeal. “Artists are always working within the limits of technology and then pushing them. That’s how you get innovation and new techniques, and the same is true for great designers like Yves Saint Laurent,” Ishikawa says. “His chosen field happens to be fashion, but I think he always was thinking more like an artist.”