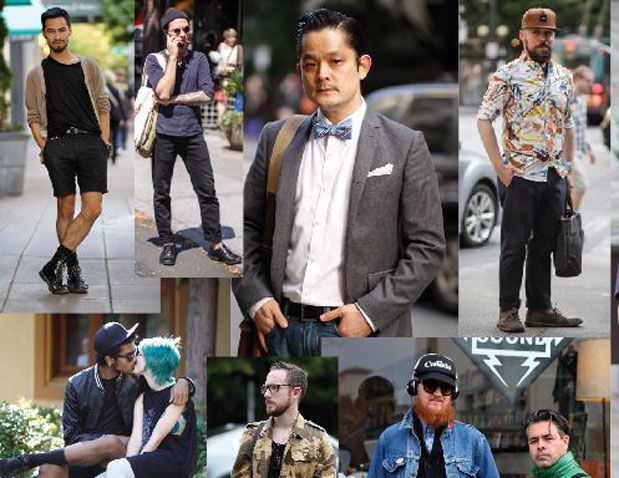 I spotted a man on Pine Street the other day wearing an ascot. Just your average Seattle man in weatherproof shoes, coffee in hand, on his way to work. Wearing an ascot. He could have been naked from the waist down carrying an assault rifle, and had a cop interrogated me, I would’ve confessed, “I don’t recall any nudity or a gun. But I’m certain about the navy blue, silk jacquard ascot.”

Checking my favorite barometer of fashion, Bill Cunningham (of The New York Times’ “On the Street” column), the story of late is the renewed energy around menswear and the slow death of casual Friday. I thank God—or Paul Smith or whomever—that these fashionable winds have finally come ashore in Seattle, where I was once mistaken for a gay, international diplomat simply for wearing a collared shirt, polished shoes and a belt.

It’s now kind of OK for a man to style his hair and care about what he wears. In Georgetown, Ballard and Capitol Hill, I see a meta-exercise in sartorial insouciance at play. Clad in plaid, tucked into greasy jeans, guys seem styled in standard-issue neo-grunge from a distance. But up close, as they’re grabbing coffee at Vivace, the curatorial hand is clear—dandies in disguise. What looked like a vintage Mackinaw Cruiser worthy of a Macklemore mention turns out to be Filson’s new “Seattle Fit,” the company’s more stylish, fashion-forward line. All across the city, men aren’t just groomed, they’re hypergroomed—sometimes taking great care to appear entirely unkempt. Hang out near any of Rudy’s eight local primp palaces (aka barbershops) and you’ll see beards and ’staches that run the gamut from scruffy to biblical; human topiaries sculpted with hand-forged razors, artisanal pomades and organic oils. I don’t know their secrets, but if bearding was an Olympic sport, some of these guys might be accused of doping. Rudy’s now sells a full line of product, including Burroughs Beard Oil from Prospector Co., and its house-brand shampoo, conditioner, shaving cream and body wash ($12–$18 at rudysbarbershop.com). Body wash??? I’d rather be caught buying porn.

CLICK TO VIEW OUR SLIDESHOW OF DAPPER DUDES AROUND SEATTLE

Between grooming, fashion, food and drink, a Seattle man has more latitude than ever before in how to express who he is (or wishes to be) and what he stands for. Uniforms—formal or fashionable—signify status, and this new complexity requires that our old radar be recalibrated to make sense of the new signals. Whether you’re sipping local, barrel-aged whiskey at Old Sage or pounding PBRs at the 9lb Hammer, the only way to know if the guy on the next stool in the Carhartts and tattoo sleeves, stroking his Fu Manchu, is a designer, doctor or dockworker is to actually ask him. Which, come to think about it, isn’t a bad thing.

(Of course, not everyone is embracing the new freedoms being conferred. South Lake Union at lunch hour is occupied by vast numbers of gainfully employed young men, dressed identically in jeans, sneakers and graphic tees, accessorized with backpacks and security lanyards—clinging like Velcro to the old ways.)

When it comes to shopping for clothes, I prefer brick-and-mortar retail. Like golfers who grab a quick nine holes before work, I squeeze in a round of shopping after work or on Saturday morning. I enjoy talking about the trends coming down the runways or the break of a cuff, the same way they like talking about pros on the PGA tour and the break of a putt. You can’t get that online.

At Nordstrom, just about every fashion decision is a gimme. It’s the easy one-stop shop to stock up on basics, and still make your tee time. Unfortunately, when a key premise of your brand is to take any and all fashion hazards out of play, you risk catering to a bunch of high-handicap fashion duffers in Sansabelt slacks. Like a suburban public course, Nordstrom is a pleasure to walk, but not the most challenging.

To Nordstrom’s credit, it has introduced a new mix of heavy hitters such as Dolce & Gabbana, Lanvin and others that help make it a more satisfying place to play. And if you want pointers from a local pro, connect with my friend Brent Martin. As a personal shopper, it’s his job to marshal the most shopping-averse and style-challenged men (and women) through the store and make them look like a million. Which is just an expression, not a budget.

From Nordy’s, it’s an easy wedge (the golf club, not the shoe) to Butch Blum and Mario’s. These guys are the Augusta National and Pebble Beach of Seattle men’s fashion—championship quality and impeccably manicured. Both offer a mix of iconic, Old World labels and contemporary designers, along with a gracious and knowledgeable staff. If you like the idea of being thoroughly schooled in the arts of tailoring, textiles and trends, then welcome to the club.

Butch has a longstanding love affair with Luciano Barbera, the classic Italian brand famous for its fabrics, and an exclusive with Closed from Germany. It’s also the place to go for a made-to-measure suit, starting at $995, once your options vest. Around the corner, Mario’s has twice the space to showcase everyone from Armani to Zegna, and dozens more designers in between. (Browse its entire roster online.) If you come, be warned: Just as you don’t test-drive the Tesla before the Toyota, shopping here will spoil you for anything else.

I know a guy who’s so self-conscious about shopping, he can’t walk around town with a shopping bag in his hand—even a manly one from Mario’s. He’d wear his first communion suit to his own wedding before shopping at a store called Baby & Co. But it’s a must-visit now that one of Seattle’s best women’s boutiques carries a selection of menswear. I say “selection” because the clothes take up the same square footage as Nordstrom dedicates to shoelaces.

Located in Belltown, Baby & Co. goes “narrow and deep” on a few designers, including my favorites, Munich-based Hannes Roether and the always innovative Girbaud. There’s more, but not much more. I think of the owners, Jill and Wayne Donnelly, as my own personal shoppers; the catch being that they have to guess at what I might want, they can only carry so much and, well, flying to Europe is expensive. I justify my splurges by calculating the cost of flying to Germany myself for a shopping trip.

Next stop: Totokaelo Man. If Baby & Co. is a nook, this place deserves its own ZIP code. Located on Capitol Hill below Totokaelo’s women’s boutique, it’s a cavernous space awash in white and bright lights, trimmed in natural wood. It proclaims on its website to be a purveyor of “thoughtfully curated fashion and objects,” and it succeeds in creating an art gallery aesthetic. For anyone interested in design and architecture, both shops should be on your inspiration field trip itinerary. Its gracious salespeople-cum-gallerists leave you to waft your way about the acreage undisturbed, but for the occasional murmur of vital way-finding (e.g., “Thirty percent off here, new arrivals there…”). I felt the vastness of the place every time I made the transcontinental trek to the mirror to get a look at how a Yamamoto jacket fit—too tight, though I did score the perfect fit in a car-coat-length trench by Saturdays Surf NYC for $148 at 50 percent off.

Given that the Van Noten, Margiela and Yamamoto works on display do rank among the fashion world’s modern masters, their prices can seem like capital investments. But if you aspire to join the ranks of those Monocle magazine–reading, craft-cocktail-swilling slaves to fashion who have been spending down their savings in order to look like Lotto winners with exquisite taste, this is the place.

But maybe you suffer from retail celiac disease, and salespeople are your gluten; or you’d really rather write code than carry on a conversation. If so, hurry over to Hointer. The name may sound like a computer virus, but Hointer is actually a glimmering palace of denim located in Wallingford and Pacific Place. And Nadia Shouraboura, the Russian Oz behind the concept, is attracting hordes of tech pilgrims curious about the wizardry she’s created behind the dressing room curtains.

Your experience here hinges on your smartphone and the Hointer app with which you scan the tags of the jeans you want to try on. In the dressing room, your selections slide down a chute one after the other—it’s like standing inside a jeans vending machine. Need a different size? Just tap the app, and it dispenses another pair. When you’re done, drop the rejects down the chute. As shopping experience go, it’s as friction-free as you can get.

I bought a pair of Joe’s ($135) that are as comfortable as the Superman pajamas of my youth, thanks to a bit of stretch; and another from Nudie Jeans Co. ($185) that are as scratchy as a Maine-potato sack—which Nadia solemnly swears will soften to fit like a custom-made second skin. So get used to the name Hointer, because it’s soon to be your go-to place for the perfect jeans to make your socially awkward ass look great.

Our final store on the tour also happens to be the most accessible for the average guy. Besides having a name you can easily pronounce—Ian—the clothes it sells are easy to wear. Nothing here will make you wonder if you’ve accidently wandered into the women’s department (upstairs in the loft); and its prices won’t force you to start that three-month ramen diet.

If Totokaelo translates as “clothing as art,” then Ian means “sportswear.” In addition to old favorites and familiars, such as Levi’s and J Brand, it carries a newer American line called Relwen. Each shirt, sweater and jacket looks like slightly cooler versions of favorites I used to own. But these are updated with more interesting details, richer fabrics and a better fit. The line—and the whole store, really—is about hardworking clothes with a sporty edge that won’t easily go out of style.

I bought a striped cotton V-neck sweater with small pocket details and polo-shirt tails (say that three times fast)—normally $148; I paid $98 sale price. The first time I wore it, three people—three totally normal Seattle dudes who wouldn’t know Yamamoto from Quasimodo—gave it an unsolicited nod of approval, “Dude, cool sweater.” You gotta like that.

It seems Seattle finally has enough fashion critical mass and, more importantly, critical awareness of what’s possible across the men’s fashion spectrum—whether your fashion statement elicits a fist-bumping, dude-on-dude compliment, or prompts the sexiest, most stylish woman at the party to cross the room and whisper, “Baby, I love your look.”

Either way, may you never again have to answer the inane question typically asked by the jerk in pleated Dockers and a polo shirt emblazoned with the logo of a soon-to-fail tech company (which he got for free at last year’s developers’ conference): “Why so dressed up?” If it does happen, feel free to quote me: “Always dress like you’re going someplace better later.” (Though I draw a line at the ascot.)